This one is even more of a personal memoir than usual as my first glimpse of Aston Villa was at Elland Road, Leeds on Saturday 18th October, 1958. That’s almost sixty years ago – sixty years before I was dragged kicking and screaming into the ground, Britain had been fighting the Boer War. Shows how old I am now.

Some of the readership may be aware that I was born and brought up in Leeds. I lived north of the City Centre in the area just off Cardigan Road, in a street that was part of the Harold’s back to backs – 27, Harold Road to be precise. I shared the house with my parents and my two brothers until my father’s job took him to the North East in 1959.

There was no bathroom or toilet. Bathing was done in a tin bath  that was kept in the coal cellar. Bath night was Saturday, in front of the coal fire, the two brothers first and then me, slopping water around on the mat. The lav was up the street – out of the door and into a yard. It was shared with the Walters family next door. There were five of them as well but the three boys were all much older than us and two of them had motor bikes. Ten people shared one toilet so lingering was not encouraged and when Bill Walters needed to go and you were in there, you got out pdq.

The house was rented, as was my paternal grandparent’s residence two streets away in Harold Grove. My father had been brought up in that area while my mother was originally from Kirkstall and had moved to Middleton when she was in her teens. They met in the offices of Moorhouses, the jam and Christmas Pudding makers, who had a large factory not far from Elland Road and, despite my father being called up in 1942, they stuck together through what must have been three difficult years.

He was still in the army when they married in 1947, helping to find low level Nazi officials in Occupied Germany and when he was demobbed, he returned to Moorhouses and I came along in 1951.

My father and his dad enjoyed their rugby league and I was taken along to Headingley when I was 5 or 6. My mother also liked the game although her father and brothers preferred Hunslet, then a major power in the game who played at Parkside, just off the Dewsbury Road and close to the Middleton Estate where they lived. But they liked their football as well…….

As I got into the 13 a side game, I began to recognise the players and formed a particular attachment to the Leeds stand off, Lewis Jones, a player who had been enticed up to Yorkshire from Welsh Rugby Union. He was a mercurial player with a great side step and body swerve and he could plant the ball over the posts from most parts of the pitch. He had cost the Loiners a lot of money (for those days) and was widely regarded as the star of a team that had several other very good players.

On the other side of the city, Leeds United also had a Welsh super star in John Charles. Both he and Lewis Jones came from the Swansea area – Charles from the city, Jones from the small town of Gorseinon and they both captivated the fans of their clubs to become true legends. Throw in Geoff Gunney at Hunslet and you had three solid, working class heroes who reflected the gritty nature of what was then a sooty, smelly and rather dreary city.

For some reason my Grandad Worthy and my Uncle Ken decided to take me to Elland Road on this particular day.

Leeds RLFC must have been playing away and I may have been staying with the Worthy branch of the family in Middleton. Ken lived nearby and I always got on well with him. He liked his sport, sometimes took me to the other side of Headingley for cricket and knew one or two rugby league players through his work. We probably caught the No.29 bus which dropped us at the top of Beeston Hill and walked down the hill to Elland Road. United had floodlights, quite small ones which were similar to the original Roker Park ones and they were impressive as rugby league and floodlights had not made that acquaintance yet.

Neither team were doing well in the First Division – in fact Villa exited it at the end of the year. Leeds had sold Charles to Juventus for the unheard of sum of £65,000 and had brought in several new players, none of whom had made much of an impression. Manager Bill Lambton had succeeded Raich Carter with little success (full back Jimmy Dunn described him as a bloody comedian) and The Mugs as Norman and Ken used to describe them were in the lower third of the table. So for a rugby league man experiencing his first football match, it couldn’t have been less attractive.

It was an absolute stinker. It finished 0-0, nothing of any note happened and I was bored stiff by 3.10. I can remember nothing about it except a feeling of relief when the referee blew his final whistle and we and the other 21,085 spectators filed out to the green Leeds Corporation buses stood in Lowfields Road ready to take the crowd home.

I have been unable to find the Leeds team for that day but I think it might have been this; 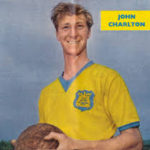 Baird and Cush had been brought in with the John Charles money while O’Brien was a player that Norman couldn’t stand. I think I remember him giving him a piece of his mind. He may even have taken his woodbine out of his mouth in order to do so….

The Villa side I did find; 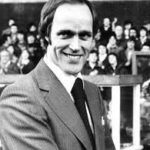 Gordon Lee managed Newcastle United in the 1970’s and was as popular as Alan Pardew while Jackie Sewell came from the rugby league stronghold of Kells, near Whitehaven. He played in the same Notts County team as Tommy Lawton, made a big move to Sheffield Wednesday and then on to Villa. He gained 6 England caps scoring three times and then got another ten for Zambia when he went to play for City of Lusaka after he left Hull City in 1961.

It wasn’t an auspicious start to watching football and I happily went back to collecting autographs at Headingley, grudgingly admiring the likes of Billy Boston thundering down the wing in front of the South Stand and watching the steam rise off the then contested scrums.

If only my dad hadn’t gone to work for Regent Oil Company, life may well have been different.

Harold Grove found at https://commons.wikimedia.org/wiki/File:Harold_Grove_LS6_8_July_2017.jpg. Posted by Chemical Engineer.  John Charles clip posted by WOODDDDDDDYALUFC. Lewis Jones clip published by SuperLeague TV. If there is any copyright claim, not answered by ‘fair use’ exemptions, on the images used to illustrate this report, please make us aware and we will add credits or remove as requested.

6 thoughts on “The First Time Ever I Saw Your Team: Aston Villa”

Next Post
Sixer’s weekend off. Snowfall, no football but Millwall