John McCormick writes: the cup tie at Carrow Road mentioned below has a certain resonance but I don’t remember the replay. 1968 is very much a time when I’d have been there but there’s nothing, absolutely nothing, that I remember about it.

Pete Sixsmith, once again, comes to the rescue. He was there. He remembers it. He leaves me hanging my head in shame.  I can say no more and I humbly apologise, much as so many of our players should do.

My first view of The Canaries came at Carrow Road on January 27th 1968 when we trekked to Norfolk for an FA Cup tie. I wrote about it back in August when we were full of optimism and we turned in the best display of the season when we won 3-1 thanks to goals from Lewis Grabban and Aiden McGeady.

Fast forward seven months (from August lastyear, not 1968) and the manager has been sacked and is now at Bradford City (and not doing brilliantly there by the looks of it) while only three of the starting XI were on show in the latest debacle on Easter Monday.

Jason Steele is not yet back in the first team but may as well be, seeing as we are paying all of his wages as opposed to only a percentage of Camp’s. Billy Jones is injured and wouldn’t be picked anyway as he has slowed up considerably from this season from tortoise pace to sloth pace, while Kone is also on the injured list (again) and is probably looking through the French Leagues to see who wants a centre half for next season. I don’t envisage him turning out at Accrington Stanley.

Galloway has disappeared off the face of the earth and Browning is back at Everton receiving treatment for whatever injury he picked up. Ndong is doing nothing at Watford  (not even sitting on the bench) while Vaughan is at Wigan. Grabban is part of a Villa side that looks a good bet to win the play offs.

Of those on the bench, Ruiter is nursing a broken finger, Matthews gets the odd game (and ducks out of tackles), O’Shea has been worked to death because there is nobody better, Gibson has had his contract cancelled after playing dodgems in Fulwell, Gooch and Asoro are currently playing in the first team while Khazri is having a pretty good season for Rennes and is preparing to play for Tunisia against England in the World Cup.

And we wonder why we are where we are…….

In 1968, the managerial reign of Ian McColl was coming to an end. He was in his third season, had not been a great success and had brought a number of Scottish players to the club. He had been appointed because of his close relationship with Jim Baxter who the board had lined up as the player who could thrill the Wearside crowd and fire the club up the league. He didn’t. A failure to fully recover from a bad leg break in a European Cup Winners Cup tie in Vienna and a great desire to drink as much lager and Bacardi as the world could produce, meant that he fired intermittently and he had been sold to Nottingham Forest in the December of that season. We still had his cousin, the fearsome and even harder drinking George Kinnell who McColl preferred to Charlie Hurley. Throw in Neil Martin, Ralph Brand and Ian Porterfield and the team often ran out to Scotland The Brave rather than Z Cars, wearing kilts rather than the white shorts we donned at the time.

The draw at Carrow Road had been a tight one. Hugh Curran put them ahead in the 80th minute with Colin Suggett levelling a few minutes later. The replay was on the Wednesday night and Monday’s draw had given the victors an away tie at Chelsea, not a glamorous tie as we sat 18th out of 22 in the league table. 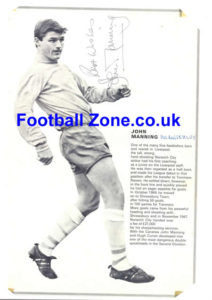 The result was a disappointing 1-0 defeat, with centre forward John Manning (right) scoring ten minutes from the end, and that was that for another year. Still, we managed to climb the table and finished 15th.

What would we give to be able to do that these days?

Editor’s comment: I couldn’t find any clips of Norwich v SAFC from that era, nor of Norwich players named in the piece, not even the much travelled John Manning, hence the  video clip above which was pasted on Youtube by DECO4563 in 2012.  If there is any copyright claim, not answered by ‘fair use’ exemptions, on the video and images used to illustrate this report, please make us aware and we will add credits or remove as requested.

1 thought on “The First Time Ever I Saw Your Team: Norwich City”

Next Post
SAFC vs Norwich City Who are You?: on Grabban, Delia … and Ricky van Wolfswinkel