Monsieur Salut writes: here endeth the 2017-2018 series of Who are You?, our detailed interviews with warm, witty and/or wise supporters of Sunderland opponent. Andy James can not make it the Stadium of Light on Sunday but will be with the festive travelling support in spirit. Thanks for the answers, Andy, and now enjoy your reacquaintance with the Premier League, a revival in Molineux fortunes he rather charitably predicts will be repeated sooner or later by Sunderland. So top versus bottom – how many of us actually believed that is how the season would end up? …

Salut! Sunderland: bravo. It has been as great a season for you as it’s been another disaster for us. When did you get the feeling 2017-18 was going to be special for Wolves?

Andy: there have been many false dawns as a Wolves fan over the years and despite relatively heavy investment in the 2016-17 season, managerial changes and a lower table finish it is fair to say expectation was not riding high for 2017-18.

Within 20 minutes of the opening league game against bookies favourites Middlebrough, it was apparent that something fundamental had changed. Wolves dominated possession and had an authority over the game that was, well, not like Wolves actually! So from the very first game it was evident something special was happening.

There’s no easy part in getting out of the Championship, but the next bit is the real test: will the team stay together and perform well enough to stay in the Premier League?

Although we currently have flair players like Jota, Costa, Caveleiro and Neves the success of this Wolves side is built on meticulous planning, organisation and hard work and the key to how well we do will fall upon the abilities of Nuno Espirito Santo to adapt to the PL.

I am quietly optimistic that if we keep our star players that we can avoid flirting with relegation. Some fans are getting carried away and expecting a top six finish in our first season back. Personally I am hopeful of a top half finish. Let’s wait and see! 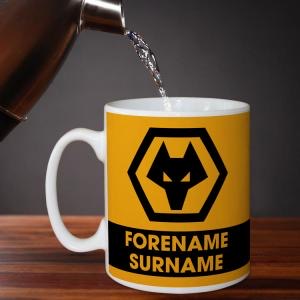 Perhaps it’ll be as important to keep Nuno as to ward off bids for your better players. Assess his qualities as manager.

Absolutely! As mentioned above Nuno is essential to the heartbeat of the team. It’s all about preparation and never being satisfied, always looking to improve.

Your pal, Andy Nicholls, answering questions for the game at your place, said everyone was doing the business for the team but reserved special praise for Willy Boly, Jota along with Leo Bonatini and a few others such as Doherty, Caverleiro and Coady. Is there anyone you’d single out as especially instrumental to your success?

I think it is now well documented that Neves is the lynchpin: the key to how Wolves play.

He is the most complete player I have seen at Molineux and also buys in to the hard work equals success mantra.

Clearly too good for The Championship it will be fascinating to see how he adapts to the Premier League.

Obviously we hope that he is still a Wolves player but many times this season we have wondered how on earth he is playing for us at this level.

Bonatini, of course, is only on loan and he said he is unsure about his future. He hasn’t beens scoring but is he a player you really need to hang on to?

Jury’s out. Leo is team player, seemingly very popular but has struggled of late. He is excellent at link up play and has a very sharp football brain. He lacks a little bit in pace and is currently low on confidence after such a bright start. Heart says “keep” but head says release him and free up a squad place for a more clinical striker. Personally I think we could do a lot worse than retain Leo’s services.

Hand on heart, how far can the present management and ownership structure take Wolves – is it a little over the top to think in terms of a return to the glory days?

This season has exceeded all expectations and it is hard to fully comprehend the shift in fortune and quality.

Honestly, it’s hard to predict where we could end up. Much has been made of the Mendes connection and we are still to find out what his involvement will mean long term. It is not outside the realms of possibility for Wolves to finish in the top six in the next couple of years depending upon the level of investment and recruitment this summer.

And what, putting it off no longer, about us? Have you been shocked by our wretched decline or not in the least surprised and did you think after the draw at Molineux that we might be turning the corner?

Absolutely shocked and saddened to see what is happening to a great traditional proper club with proper fans. Many Wolves fans see a direct correlation between our two clubs. We have double dipped very recently in the same manner as you – let’s hope you bounce back like we have.

Any other thoughts on Sunderland – the club, the fans, the city and region, Chris Coleman?

It is hard to shake off the losing mentality no matter the quality of the players – maybe League One will be the catalyst to rejuvenating confidence. The fans have had to endure horrendous home form for two years now. Respect to those who have supported the club through thick and thin.

Very surprised Chris Coleman was not able to halt the slide.??

Wolves have been on their knees. Can we bounce back as you have done?

Already covered but Sunderland are too big a club to languish in the lower divisions for too long. Once momentum gathers I’m sure the good times will be back. There is no substitute for winning regularly – our L1 promotion season was a blast.

Of all the links between our clubs, Jody Craddock stands out for me because of the nature of the man, his wholehearted apporach to football (and art) and, of course, his ablity to rise above personal tragedy. I imagine you feel the same despite lots of other names (eg Don Goodman, Michael Gray, Carlos Edwards, Paul Butler).

Yes, Jody Craddock -[check out a past interview with man himself by clicking here; there’s also a link to his own website – Ed] – is very fondly remembered by Wolves fans – a consummate professional and true gentleman.

Your highs and lows as a Wolves supporter?

The lowest ebb of recent times would have to be our 1-5 defeat at home to arch-enemies West Bromwich Albion in our last PL relegation season in February 2012. Absolute humiliation. Big Mick was sacked within hours.

Too many highs this season but a few immediate ones are the away wins at Bristol City, Middleborough and Cardiff. Neves’s goal against Derby has been the most memorable moment.

And the players who have given you greatest pleasure – or wish you’d been old enough to have seen from the past?

Until this season it would have to be Steve Bull. However this team and some of the individuals have been magnificent. The trickery of Costa and Caveleiro has been outstanding and Neves is just breathtaking at times. In terms of Wolves players I wish I had seen Billy Wright and Kenny Hibbitt in their prime.

Who should have been allowed nowhere near Molineux?

What will you miss, or miss least, about the Championship?

The competitiveness and diversity of the Championship will be missed and, without doubt, the worst element of the division is the wretched standard of refereeing.

There is bad, very bad and there’s Stuart Atwell….

You may have to be prepared for a lot more play-acting, in other words cheating, next season; the Dele Alli question is whether diving actually matters much (his manager says it doesn’t)

We have been accused of simulation at times this season and maybe on occasion that has been fair comment.

However, there definitely appears to be an assumption that if one of our Portuguese players goes down they are playacting, often it has not been the case at all.

Generally our fans are very critical of our own players cheating or timewasting.

Will you be at the party? What will be the score?

I will not be able to be at the Stadium of Light as my wife has kindly booked another engagement. Wolves will want to win this game as Sunderland are the only team we have failed to beat this season and I am sure Nuno will not let the players ease off.

That should be good motivation for you guys to get one over on us. Thankfully as you are already relegated, a Wolves win won’t involve too much guilt so I am going for a 0-2 win to the Old Gold n’ Black.

* Andy on himself: I have supported Wolverhampton Wanderers since the early 1970s and like you guys have seen many highs and lows! I moved to North London in my teenage years and Wolves were the way I kept in touch with my heritage, they are in my blood. It’s the cross we have to bear.

I moved back to Shropshire in the 1980s and have been a season ticket holder ever since. I represent a section of supporters within the Fans Parliament, a group that regularly meets with the club and it is evident that the current owners mean business and these are exciting times.

Professionally I work in the field of architecture and in my leisure time enjoy songwriting, cricket and cooking. I am married with a grown-up son who I have burdened with supporting Wolves; the heritage carries on!

I wish you Mackems the very best for a successful return to your rightful place at the top table of football.

2 thoughts on “SAFC vs Wolverhampton Wanderers Who are You?: should this have been us?”

Next Post
Season End Reviews: (5) we have been through hell and high tide