John McCormick writes: this week I’ve read something new and different every day, including Bob Chapman’s fine report from Fulham, Malcolm’s end of season review [which I recommend you read before listening to Peter Knowles (below)] and Pete’s appreciation of one of my boyhood heroes.

Now we have this, the final instalment of a Pete Sixsmith series that has, as I said a week ago about the sister (away) series, brightened a dismal season.

Even though I say it myself, as a proud contributor, this is some site.

Here we are at the end of a long, long trail that started with a visit from Derby County on August 4 last year, where I described my first sight of Cloughie’s Rams in 1970. Both ended in 1-1 draws, both seasons saw us relegated, although the fall in 1970 wasn’t quite as precipitous as this year’s.

During the season I have been able to exercise my love of nostalgia and have waxed lyrical about boyhood heroes and have been less enamoured with other players and managers who have flitted over the scene.

If anyone is writing this kind of thing in 2048, will people actually believe that Lee Camp and Ashley Fletcher were so poor, or that Jack Rodwell went into hiding while still drawing his salary? Probably not. 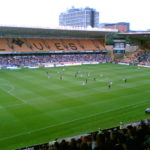 We started with a “proper” football club and it is fitting that we finish with another one out of that particular box. They were a team that I grew up with in the late 50s and early 60s and I have a vague memory of watching their television exploits against Honved and various other European teams in floodlit friendlies. Even though I far preferred Rugby League, I was thrilled by the crackling atmosphere of Molineux as it came over my grandad’s 12” Ferguson.

My first sight of them in the flesh was on Good Friday, April 16, 1965 when they were the visitors to Roker. Good Friday then was very different from what it is now. Shops did not open and pubs kept Sunday opening hours. Cinemas closed, public transport, on which many working class people relied, was reduced and a trip to the seaside or an outing at a sporting event was one of the few pleasures open to folk.

Thus it was that a large crowd of 43,328 filed into Roker Park to see second bottom Wolves pay their first visit to Roker since December 28 1957 as they made a regal procession to the first of two consecutive League Championships in the season we descended into the Second Division for the first time in our history.

Household names like Billy Wright, Eddie Clamp, Peter Broadbent and Norman Deeley had long since left and had been replaced by a mixture of journeymen pros and young rising stars. They ended up being relegated along with Birmingham City, although they were back in a couple of years under Ronnie Allen.

For this visit, they were managed by Andy Beattie who had replaced the legendary Stan Cullis in November 1964. He had been around the houses a bit before he arrived at Molineux, including the Scottish national team, where he had resigned halfway through the 1954 World Cup in Switzerland as a protest at only being allowed a 13-man squad, Carlisle United, Huddersfield Town and Barrow on his CV. He had a reputation as being a manager who could dodge relegation but it didn’t work at Wolves as they gently slid beneath the waves.

Our manager was the always suave, always immaculate, Gentleman George Hardwick who was also coming to the end of his time at Sunderland. He had lifted us out of the relegation zone and looked to be building a half decent team but the board wanted a bigger name and he left in the summer to be replaced by Ian McColl.

This was to be Brian Usher’s final game for Sunderland and he played at outside left because George Mulhall was injured. It ended the Mulhall’s record of 124 consecutive appearances and he should have been replaced by promising youngster Alan Gauden. However, Gauden’s car broke down on the way to Roker and he arrived after the kick off so Usher was drafted in. 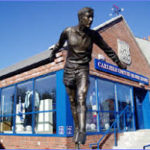 The Wolves team had a smattering of those who had won back to back league titles:

Flowers and Thompson had both played for England while McIlmoyle had joined from Leicester City and went on to have successful stints at Middlesbrough and Carlisle United, where there is a statue of him outside Brunton Park (left).

The really interesting figure in that team was Peter Knowles. He was the brother of Cyril and had grown up in the same village (Fitzwilliam) as Geoffrey Boycott.

Knowles had been picked up by Wolves through their South Yorkshire nursery club, Wath Wanderers and was pushed into a first team that was in decline. By the end of his first season, playing with an arrogant swagger he had scored six goals and set up more. He asked to leave but was kept and he helped to fire a good side back to the First Division a couple of years later.

Wolves spent two seasons in North America representing Kansas City in a tournament in which we represented Vancouver in 196 (we were dismal) and while there he became a Jehovah’s Witness and prepared to give up his football career and serve his God. He did this in 1969 when he retired from the beautiful game in order to learn about the bible and never played again. Wolves hoped he would and retained his registration until 1982 when they realised that, at the then age of 36, the one time “Golden Boy” would never return to the club.

By this time, the railway line from Shildon to Sunderland – change at Bishop Auckland and Durham – had closed and Monsieur Salut and I were travelling on the bus that started at Close House and was run by Messrs Snowdon and Reilly. It parked near Redby School and it was but a short walk to the ground. 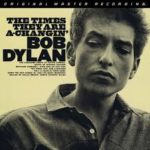 The radio would have been on the Light Programme and we may well have listened to Pete Murray or Keith Fordyce spinning hits of the day. As both of us were apprentice folkies, we would have enjoyed The Times They are a Changing and Catch The Wind and probably Here Comes The Night. It’s less likely that we would have appreciated Ronnie Hilton’s epic A Windmill in Old Amsterdam a strong candidate for the top 100 of utter drivel. I bet M Salut had a silent swoon over Francoise Hardy’s All Over The World. I know I did [what’s more, I interviewed her in Paris 40 years later and still swooned – Ed].

The game ended in a disappointing 1-2 defeat. Mike Hellawell opened the scoring for us in the 2nd minute and we sat back and waited for the avalanche to come. It didn’t. McIlmoyle equalised just after half time and Knowles grabbed a deserved winner four minutes from time to give the Wolves supporters some hope. It was unfounded. 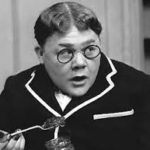 Home we trooped for a night in front of the telly. We had missed The Flowerpot Men, Reg Varney and Pinky and Perky (thank goodness for football) but were home in time for Gardening Club and Sykes. His supporting cast included the great Gerald Campion, forever remembered as the fat frabjous fool of the Remove, William George (“Billy”) Bunter. Yarooo, you chaps……..

As we go our different ways at 14.30 on Sunday, let’s hope that we can meet again in the top level. In 1964-65 just over half of the First Division was made up of clubs who are there now. Of the remaining nine, six were in Division Two, Bournemouth and Watford were in Division Three and Brighton were in the process of winning the Fourth Division title.

Dylan had it right; the times they are a changing.

Molyneux photo posted on Wikipedia by John Nickolls. God’s footballer published on youtube  by poultryhen, 2009. Peter Knowles interview published on youtube by Mercian 1969, 2017. If there is any copyright claim, not answered by ‘fair use’ exemptions, on the videos and images used to illustrate this report, please make us aware and we will add credits or remove as requested.

3 thoughts on “The First Time Ever I Saw Your Team: Wolverhampton Wanderers”