It’s not a clear-cut as that, with only a point separating Cardiff and Fulham, who have the better goal difference, and I’m not going to make predictions for the final game because I don’t want to jinx either club. Indeed, were I to use my graph to make a prediction I’d have to choose both of them because they both are, and will remain, in the clear space reserved for automatic promotion: 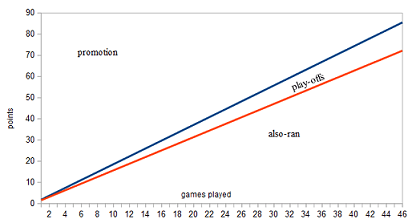 Look at the graph now, or at least the part showing the last 20 games:

You can see how consistently good Wolves have been.

Cardiff were doing great then stumbled.  They had a losing streak and that allowed Fulham, who had a winning streak while Cardiff were losing, to catch up.

Aston Villa have been much less consistent, hovering on the promotion/playoff  border but dipping when they needed to do better.

Middlesbrough put a decent run in, which lifted them to fifth spot, where they are safe, while Bristol and Sheffield United, who play each other next week, couldn’t hold it together and will finish with a top half place but not much more.

‘Boro look like they’ll have Derby for company. Derby appear to have recovered from a slump that saw them move from the top of the playoff zone to the bottom. They have their destiny in their own hands, and only need a draw to prevent Preston from overtaking them in sixth place. I did mention Preston in March, more or less in passing, and someone with the username “Boro Fan” pointed out that they had the easiest run-in and that he or she expected them to sneak in. It is still possible but with both clubs in decent form and at home against bottom clubs the odds are against it and I think there must be little likelihood of change.

As for the others, Leeds started well but drifted down, Sheffield Wednesday were out of contention early, and the less said about Sunderland the better.

There are a couple more clubs that popped up, and if Millwall beat Villa 10-0 and both Derby and Preston lose they could take sixth spot but I expect them and Brentford to finish below Derby, although both of these clubs could finish above Bristol City and Sheffield United, and even Preston. Will Villa be resting their best players prior to the playoffs? Will Hull City be on the beach? Not everything is certain as we approach the last game of the season.

What is certain is that it’s a well done to Wolves, who no-one saw coming, and it’s goodbye to the Championship for them, and for us as we sail in opposite directions. But with our hull plugged and a new crew on board who knows? We’ve been here before and it ended well. Which begs the question:

Should I run a new “promotion watch” next season?

2 thoughts on “Will Cardiff or Fulham join Wolves, and will Derby join Villa and Middlesbrough?”

Next Post
Sixer and Orwell: from Benjamin the donkey to Donald the SAFC saviour?