Not so cool at the Pool, said Peter Sixsmith. Benji Kimpioka was cool, as were others of the young players at Jack Ross’s disposal. Catts and Honeyman, despite Ross saying the right things about how they were working for him, were distinctly uncool. What we all think of their agent, the club’s former CEO Margaret Byrne, may be best left unsaid. Sixer’s report – he chose the Victoria Ground over pub or armchair view of England losing decisively to Belgium – fills in the gaps while Monsieur Salut happily fetes France’s World Cup success, broadly deserved …

Two years ago, we stood in the sun in the Mill House Terrace as Jermain Defoe, Lamine Kone, Wahbi Khazri, Jan Kirchhoff and various other top class players played with a swagger and élan that boded well for the upcoming season.

During the game, the news began to filter through that Sam Allardyce had been offered, and was inclined to accept, the responsibility of guiding the national team to the World Cup finals. He accepted, we got David Moyes and the rest, as they say, is history.

Now, we are trying to rebuild a team on a relatively minuscule budget in a division which our hosts on another sunny Saturday afternoon, graced for eight years in the first decade of the century. Like us, they have fallen from grace and are currently facing their second season in the National League, playing the likes of Boreham Wood, Sutton United and Eastleigh.

Like us, they have lived through turmoil, with the club being perilously close to folding last season as two successive owners showed that they knew as much about owning a football club as Donald Trump does about how to deal with people who really are your friends..

Now under the ownership of Raj Singh (failed owner at Darlington FC) and with input from Jeff Stelling, they are hoping to climb back up the leagues as quickly as possible.

New ownership opens up new possibilities; we have imported a manager from Scotland as did Pools in 2003 when they turned to former Aberdeen star, Neale Cooper. He was a popular figure amongst Poolies and although a second stint at The Vic was a failure, he is fondly remembered. He died in the summer after a fall and the day was designated Neale Cooper day, with his family and friends from Aberdeen coming to County Durham to lay a wreath and name the Mill House stand after Neale. The 2,200 Red and Whites situated there responded with warm and genuine applause. 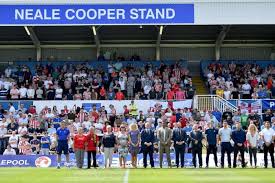 As for the game that followed, I imagine that both managers will be reasonably happy. Pools supremo Matthew Bates (who I once ho, ho, hoed on The Polar Express) would be pleased that his side defended resolutely and were able to catch us on the break. This was how they opened the scoring in the 19th minute, when a long ball from the back was under hit by Donald Love, allowing the impressive Niko Muir to sweep the ball over John McLaughlin and into the net.

This came after a good passage of play from us, with Callum McManaman looking keen, willing and dangerous and Dylan McGeough showing considerable qualities as a fetch and carry man. He looks a useful acquisition as does the keeper and Flanagan, who gave the ball away far less frequently than he did at Darlington.

The problem was with the ones that we do know about. Love, admittedly out of position at centre half, looked to be drained of confidence after his error , although he did make a fine recovering tackle in the second half to prevent an almost certain second goal and another ignominious defeat. Gooch was ok but should have scored and Matthews had another decent game, getting forward well. He seems to be a man who believes in working for his pay.

However, Cattermole and Honeyman were a huge disappointment.

Both have made it clear that they don’t want to be at Sunderland and in Cattermole’s case, that is no bad thing. He needs a move and we need to move him on – but he has a long contract and he won’t find any club to match it.

The nine years he has spent with us are surely coming to an end and if Jack Ross can find an adequate player as cover, he should be on his way.

George Honeyman has been a huge disappointment since the end of last season. He was our best player last year (admittedly not difficult) but he too wants away.

The two performances so far this season have made it clear that he is not desperately keen to continue at SAFC and many are dismayed at his attitude and performance. It may come as no surprise that both players are represented by Margaret Byrne.

We sent out the kids on the hour and looked a bit sharper, although this may have had something to do with the fact that Pools had already replaced 10 of theirs, with only Mark Kitching playing the full 90 minutes.
Ethan Robson looked sharp and Chris Maguire worked hard and played some good balls in, but we left it desperately late to level – so late that I was on my way out and texting the seven when Benji Kimpioka slotted home a good goal to spare the blushes.

Finally, a word about some of the support, who seem to think that calling every player “sh**e” represents constructive criticism; it doesn’t.

Nor does blaming the chairman for being on holiday and not signing lots of players. The way we are at the moment – two successive relegations, haemorrhaging players and with a vociferous section of the fan base that is taking personal abuse to new heights (depths?) – I would be surprised if any ambitious footballer saw Sunderland as anything more than a backward move.

There will be more agents than Ms Byrne directing their charges away from Wearside.

Next Post
Sixer’s Sevens: Kimpioka spares the blushes to maintain a superb pre-season (for him)