Back in 2007, Sunderland went to Luton for the last game of the season as a side already promoted to the Premier League under Roy Keane. A sensational 5-0 victory, and Birmingham’s defeat at Preston, gave Keano the title. This is how, 11 years ago, the youthful Salut! Sunderland recorded the win.

Less than four months later, we were back at Kenilworth Road for a League Cup game. Greg Halford was sent off and the match ended with a comfortable 3-0 victory for the Hatters.

Luton then suffered a decline that makes ours look like a minor blip, massive points deductions for financial irregularities leading to five seasons out of the Football League. The fightback has, on paper, been stunning with four good seasons culminating in promotion from League Two in May.

And now we meet again. If you thought the opening game vs Charlton was hard work – see our most recent report, in which John McCormick assesses Jack Ross’s team player by player, at this link – this one may be tougher still. Luton apparently played well at promotion-tipped Portsmouth despite losing 1–0 and will be massively up for our visit.

Have a go at guessing the score. A suitable mug awaits the winner of this week’s competition and Luton fans are warmly invited to take part.

The usual rules apply: be first to post the correct scoreline – I have to say that because three people have so far gone for a 2-0 SAFC win – do it before kickoff and have a UK delivery address for your prize mug. 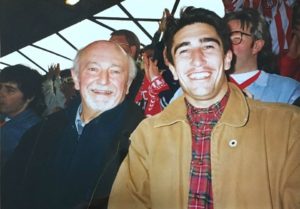 * Colin Randall writes: on a sad note, I must report the death of Derrick Illingworth, a familiar figure at games home and away and a thoroughly likeable and charming man. I extend my deepest sympathies to family and friends, and in particular his son and daughter-in-law Guy and Steph, on their loss. Derrick was always terrific company before and during games. ‘We have some great memories,’ Guy tells me, ‘and I know how much he always enjoyed lunch before the game with us all – probably far more than the game itself!’ A mutual friend, Barry Emmerson, adds that the photo – showing Derrick and Guy at the final competitive game at Roker Park, when we beat Everton 3-0 (though it didn’t save us from relegation) – is a ‘lovely picture and a very fitting send off for a true gent. So very pleased to have known him for the last 20 years’.

A death notice in The Northern Echo read: ‘Illingworth: July 27, Derrick aged 86 years of Bishop Auckland. A devoted husband to Judy, loving father of Trudy and Guy, grandfather of Sarah and Jonathan and great-grandfather of Max.’ Derrick’s funeral was held on Tuesday at the Wear Valley Crematorium, Coundon.

23 thoughts on “Luton vs Sunderland Guess the Score. Which 2007 visit will it be more like?”