The old maxim says that wins like this sort out the champions from the also-rans. 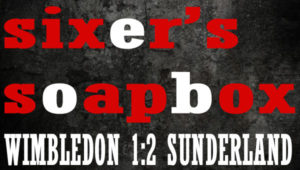 Games where you are under pressure for all of the opening half, where defenders are being continually tested, where the midfield can never quite get a grip on the game and where a partisan home crowd are sensing the blood of the biggest beast in the arena, are the ones where championship winning teams are moulded.

This was one such occurrence and I hope that there are more as the season goes on, because if we win them it will lead to a greater intensity and a greater desire not to be so badly wounded that we have to come back to a neat and compact but ultimately unsatisfactory Kingsmeadow next season.

AFC were the toughest opponents we have faced this season. Seemingly reared on raw steak and protein drinks, they were the biggest side I have seen for a long time. They boasted a 6’3” centre forward in James Hanson, a 6’2” midfielder in Mitch Pinnock and another forward in Joe Pigot who was a shade over 6’0”. And they could all play a bit as well.

They swamped our defence at times. A la Gillingham, the ball was moved quickly up to the big men and they were rewarded with a splendid goal in the 9th minute when the mobile Pigot, a 24-year-old who has been around the lower leagues for a while, volleyed home an excellent cross from the relatively tiny Andy Barcham (a mere 5’8”) after Barcham had taken advantage of an error by Donald Love.

More could have followed. Some of our defending was desperate in both senses of the word. Balls were scrambled away only to be popped back into the box for more scrambles. Chances were missed by the home team as they controlled the midfield and forced errors by our defenders.

For Glenn Loovens, brought up in the cultured atmosphere of the Feyenoord academy, this was not a game that he relished. He was easily turned by the impressive Hanson a number of times and he was asked to sit out the second half so that his fellow Dutchman, Alim Ozturk could use his height and bulk against the Warrington, sorry Wimbledon, forwards.

It worked. Ozturk had his best game in a Sunderland shirt and stood up to and physically competed with Hanson and Pigott and although there were more scares than you would experience on a ghost train, we came through a testing 45 minutes without conceding.

Once again, the manager made in-game changes. We started out as a 4-3-3- with Reece James pushing forward. That was brought to a screeching halt after the goal and we reverted to a 4-4-2 in an attempt to steady the ship.

Early in the second half, off came Power to be replaced by McGeouch, and Oviedo came on for James. We had looked more settled at the back and now, returning to our preferred 4-3-3- mode, we pushed forward.

It wasn’t as fluent as it had been in Kent on the Wednesday. Josh Maja (a little over 5’9”) found Will Nightingale (a little over 6’1”) a difficult opponent as he was marked as tightly as a GCSE History paper. Maja worked hard and this would have been an important learning curve for him. Charlie Wyke and/or Jerome Sinclair would have competed with Nightingale on a more equitable basis.

But the changes worked. We began to get at them down the flanks and when Lyndon Gooch’s cross from the left hit Nightingale, Lee Cattermole prodded it over the line to equalise. Wimbledon’s players thought he was offside; the assistant on that side didn’t. 1-1 and we were grateful for it.

Back they came, like the orcs in Lord of the Hobbits, piling the pressure on, and they could have retaken the lead almost immediately. They claimed a penalty for handball when Oviedo appeared to use his shoulder to clear the ball and then, from the resultant corner, Deji Oshilaja, their diminutive (well, he is only5’9”) centre back and skipper blazed over when it looked easier to score.

Back we came like the smooth running, cultured football team we can be. Chris Maguire, who looked as far removed from some of the long ball tactics as Noel Coward would at a party hosted by Stan and Hilda Ogden, broke down the right, looked up and delivered the pass of the season so far.

He had spotted the fast-arriving Lee Cattermole, unmarked down the left (presumably the Wimbledon players assumed that since he had scored one he wouldn’t get another until 2022) and delivered a sumptuous pass which the now prolific Cattermole rattled in.

Back they came, but we stood resolute in the face of pressure and, on the final whistle, it was the 736 red and whites, plus a few more secreted about the stadium, that made it onto the Kingston Road in good humour.

As performances go it wasn’t great but as an example of digging in and having that extra bit of class when it is needed, it showed what we are. Maguire’s ball was outstanding, Gooch got into the game second half and McGeouch gave us that bit of composure that we needed when all around us the ball was flying up in the air.

But our outstanding player was Lee Cattermole. Oft criticised and highly paid, he rose to the occasion in this one. He marshalled the midfield, dropped into defence when required and, to cap it all, increased his goal total by 40% in one game. This would be the equivalent of Kevin Phillips scoring 45.2 goals in a single match – hopefully against Newcastle.

A good week, which took in Sheppey United v Deal Town, a win at Gillingham, Kent v Lancashire at a much-changed Canterbury, and a visit to two of Margate’s micro pubs, The Two Halves and Ales of the Unexpected, where much marvellous medicine was dispensed, ended in 9 points, two consecutive away wins and a marker put down for the future.

There will be other difficult tests to come but we passed this one well against two well-organised teams, watched by decent supporters and played in a good atmosphere. And can we say that about the London Stadium or Old Trafford?

5 thoughts on “Sixer’s Soapbox: a Wimbledon Win, a Test Passed, a Marker Laid Down. And Lee, Lee, Lee Cattermo-ole”