There was a technical issue with the original posting, which this supersedes …

Monsieur Salut has done a trawl through one Charlton fan forum, Charlton Life, to check on the reactions of Addicks fans, whether in the travelling support, watching on TV or absent altogether, to their side’s opening-day defeat at Sunderland …

?? Lee Bowyer impressed by his Charlton side's performance despite late heartbreak at Sunderland

It is hardly unusual for supporters of a beaten side to cry foul, rotten luck, we should have won, their fans are rubbish. We know the drill.

But at Charlton Life, I found not only criticism of our team, claims that Gooch should have been sent off and not yellow-carded immediately before the winner and, at odds with what most have said about our support, taunts about home fans being silent until the equaliser. There was also lots of straight talking about their own failings. And everyone more or less agreed that we were the stronger side after the interval.

Click on that link above (or here) if, like me, you find opposition views fascinating. Here are a few I plucked from the thread:

* That was tough to take. We gave it our all first half but we just lost our legs. I’m surprised Bowyer didn’t bring on fresh legs for at least the last 10 minutes. We didn’t deserve to lose and Sunderland didn’t have a lot I didn’t think. But, they scored the goals. Rob

* Just on way home from game. Sunderland are poor. We should have put the game to bed in the first half. We looked very tired in the 2nd half. Northumberlandaddick

* Hats off to the Charlton fans who made the trip and didn’t stop singing.
I laugh in the face of the Sunderland fans who didn’t make a noise until they scored. Baldybonce

* Totally typical that Charlton conceded from B**$$r%d Gooch, who took out Pearce, and the injury created 6 minutes of extra time from which he scored. I will always remember that name. I hope Pearce is ok. VFF

* Don’t know how it came across on telly but the support was magnificent, strangely highlighted by the roars when Sunderland scored, I’ve never heard a sound like it! Addickson 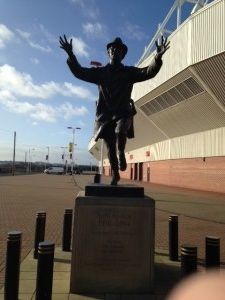 * The Bob Stokoe statue outside the SoL .. a manager wo was a failure for us but a Black Cats legend. He was in charge when they beat Leeds in the ’73 cup final .. all so long ago…unlike many ‘memorials’ the Stokoe statue is a very good likeness of him doing the celebratory run that you mention – Lincsaddick

* Yesterday I sat next to a long time season ticket holder who also goes to every away game, ie a real, dedicated and knowledgeable fan .. she told me how she cringes every time the CAFC choir start with .. ‘you’re f******** s***, you’re f****** s*** etc, and other classics like ‘we pay your benefits’ and ‘Sunderland’s a s**hole I wanna go home’ ..
she says that it brings disrepute to CAFC and makes us all look stupid when, as yesterday, we lose.
I’m no shrinking violet when it comes to having a good f and blind, but I tend to agree with her. I admire the boys’ enthusiasm but do find some of the chants a bit cringeworthy. Lincsaddick

* Expected us to lose, but still gutted !

* Players were unhappy with the challenge on Pearce by Gooch. Feel it was a red card job. Particularly p***ed off, as without Pearce, Gooch was able to pop up and score the winner a minute later. Scoham

* First half we were by far the better team. That was clear. Sunderland offered nothing, throughout the whole game really, as silly as that sounds! A huge kick in the teeth to loose it like that, and as said previously, we all knew it would happen. It’s a shame the player who scored the winning goal, scored it in the added time he created by nearly breaking our captain’s ankle. Drugaddicks

* Can’t believe the Sunderland fans didn’t make a wall of noise after falling a goal down after 10 minutes against the slick footballing machine of Charlton Athletic. Why the 30k of them aren’t right up for it after back to back relegations from the Prem and having a 12.30 kick off on the telly in this delight of a league is not enough of a reason to be screaming your mad passion for the lads means they are a disgrace. The Roker Roar is turning in its grave. Oohaahmortimer

* Defo. Remember being there in early 90s as had uni mate who was a fan. Big League Cup match with Gabbiadini, Gates and Bennett for them. The Roar was continuously 90 mins. Now silenced. Doomer Jon

* Thought Sunderland were really poor and we looked good for a while. Second half our midfield completely overrun and whilst Aribo has got some lovely touches thought he went missing in defensive duties as did others. HartleyPete

* Before I start with Charlton, I’ve got to say the Sunderland fans were awful, in the sense of they made no noise until they scored, and when they did they were so loud, can you imagine what they could’ve been with good support behind them? Not surprised they have been on such a decline. Sage

* Just gutted. The corner was fluffed and the winner fell into their laps.
1-1 would have be a fair result, but we did run out of puff in the last 20.

I walked from the Stadium of Light to the station with Lyle Taylor [having got off the team coach bus walked when it got stuck in traffic] and now sitting on the train with the team, which feels rather surreal. They’re clearly gutted too. JamesSeed

Oh, and they didn’t much like our “Who are you?’ interview with their fellow-Charlton fan, Richard Wiseman, tasing objection to his comments on the caretaker manager Lee Bowyer

But this comment, back to the post-match thread, took the biscuit:

Sunderland as a club I have always preferred to Newcastle, but their fans are a joke. They are a one club city**, so should have decent gates granted 31k is v good for league 1 but it wont remain all season and for so many f*** me they were quiet.

6 thoughts on “Sour grapes from Charlton fans after defeat – or a reality check for Sunderland?”

Next Post
Sixer’s Charlton Soapbox: breaking the mould of the first day hoodoo