A couple of days ago I thought I’d got it wrong, writes John McCormick, and should be looking at trains to Manchester, or at least asking the boss if I could have the car, in order to get to Rochdale. I had got it wrong as Rochdale head north over the weekend and I have no chance of getting up for that game. This means I’ll be relying on Pete Sixsmith for mid-game texts and a final report.

And what does Mr Sixsmith rely on himself? Nothing more than his memory, which luckily goes back a long way, although sometimes it’s a struggle:

Bloody hell; another really hard one for me – although hopefully not for the team.

This is our first ever game at senior level with the Lads from Spotland. There was an EFL trophy game two years ago, which we drew 1-1 thanks to a goal from Donald Love and then lost on penalties. I was there that night and, on the way out, reassured David Moyes that we would be all right. That’s how much I know.

I have seen Rochdale a few times, mostly at Feethams and the Victoria Ground. The first time is lost in the mists of time but the game I can recollect is a playoff game between Dale and Darlington.

It took place on the 10th May 2008 at what was then the Balfour Communications Darlington Arena, a huge barn of a ground situated on the edge of Darlington. Built by George Reynolds, it will go down as the biggest white elephant in football (closely followed by The Ricoh Arena) and, even for this Division Two play off game, it was barely a third full as 8,057 pitched up for the first leg.

Quakers had had a decent season under manager Dave Penney, although he attempted to derail it by asking his old Oxford team mate Steve McLaren to help out in the week leading up to the game. The squad had a couple of Sunderland connections. Neil Wainwright (who went on to give his name to a beer – or was that the old curmudgeon who wrote the books about walking?) was on the bench along with Julian Joachim, who always used to score against us.

Rochdale, managed then, as now, by Keith Hill also had a familiar face in their line up as Simon Ramsden played at right back and Danny Higginbotham’s brother Kallum appeared up front.

There was a good story before the game as it was reported that Rochdale striker Lee Thorpe had broken his arm on the bus on the way up after an arm wrestle with Rene Howe. Jack Ross needs to nip that in the bud if it ever appears on our travel agenda.

It was a good game and there was a decent atmosphere as 2,000 Dale fans tried to get their team over the line. Quakers went ahead with a splendid goal by Jason Kennedy in the first half but this was cancelled out by Chris Dagnall. It was heading for a draw when sub Ian Miller popped up from nowhere to steer the ball past Tommy Lee in the Rochdale goal to give Darlington an advantage that they were unable to hold in the second leg, losing on penalties after a 2-1 defeat.

Since then, I have not seen Rochdale play but I take an interest in them. As a club who have never been above Level 3 and have usually played in Step 4, they must have the most stoical bunch of supporters in the country.

They joined the Football League in the great expansion of 1921-22 and were loyal and unchanging members of Division 3(N) until that merged with the South and became Divisions Three and Four. Over thirty seasons were spent trundling off to Hartlepools, Darlington, Grimsby, Bury, New Brighton and Wrexham on charabancs and steam trains.

They had a solitary season in Division Three before sinking back into the bottom division where they stayed for ten years. A Football League Cup Final appearance in 1962 saw them lose over two legs to Norwich City (the Canaries thumped us 4-1 at Roker in the quarter final) and this is the closest they have ever come to winning a national honour. 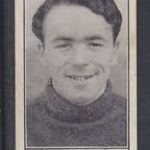 They had two notable players in that team. The goalkeeper was Ted Burgin (right) who had played well over 200 games for Sheffield United and who, in 1954, went to Switzerland as the third keeper in England’s World Cup Squad. It was not a successful campaign as they went out to Uruguay in the first knock out phase. Juan Sartori Senior would have been pleased. 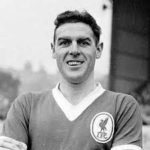 The main striker (not that that term was in usage in 1962, he was a centre forward) was Louis Bimpson, (left) a former Liverpool and Blackburn Rovers man. He had played for Rovers in the 1959 FA Cup Final and had had the cheek to score against us in the third round. According to Wikipedia, both are still alive, Burgin in his 90s and Bimpson in his 80s.

Rochdale were promoted in 1970 with the spadework being done by a man we are all familiar with; Bob Stokoe. Although he left before promotion was achieved to take over at Carlisle United, he had brought the bulk of the promotion winning squad to Spotland.

Those of us distinctly long in the tooth may remember their goalkeeper, Chris Harker. He was the Bury keeper who did to Brian Clough what Dimitar Emitov did to Charlie Wyke. Clough was out for 20 months and never really resumed his stellar playing career. Wyke should be back by November. Medical science has advanced considerably in my lifetime.

They also had a flying winger called Norman Whitehead whom I saw destroy Darlington in an FA Cup tie at Feethams in 1970.

We were at Cardiff City that day (lost 1-3; Joe Baker scored and it was the second game on Match of the Day) and I must have broken up from college for Christmas. In those days, I earned a few quid by working on the Christmas post, thanks to classmate Judith Holmes (now Sowerby) whose dad, Johnny, was the postmaster at Shildon.

was probably the best job I ever had, thanks to Joe Smith, the regular postie, who looked after me and taught me the tricks of the trade. I was told exactly how to avoid Bill Dodgson’s corgis, how to scatter the geese in the farm at the back of Vaughan Street and how to look plaintively for a tip when delivering a parcel. All gratuities went into the pot and we irregulars were given a fair and reasonable share. What larks, Pip, what larks.

Rochdale have had a few mangers with Sunderland connections apart from Bob Stokoe. Doug Collins was a caretaker there as was David Hamilton, who was on our books for years and never played a senior game. Vic Halom and Michael Docherty also sat in the Spotland hot seat without any discernible success as Dale spent twenty-five consecutive years in Division Four, nearly losing their status to Altrincham one year – they were but a single vote away from oblivion.

So, I have managed to get through this piece without mentioning The Co-op, (my supermarket of choice – their Belgian Buns are terrific), Gracie Fields (strong, working class woman in clogs), Lisa Stansfield (ditto in high heels) and Don Estelle (Give us a song, Lofty). I shall keep them for the return game at Spotland in April.

In the meantime, I hope the Rochdale fans enjoy their day out and that they are distinctly quiet on the way home; we need to win this one.

Promotion video posted on Youtube by OfficialRochdaleAFC 2014. If there is any copyright claim, not answered by ‘fair use’ exemptions, on the video and images used to illustrate this report, please make us aware and we will add credits or remove as requested.

1 thought on “The First Time Ever I saw Your Team: Rochdale”

Next Post
The Rochdale Who are You? ‘Jesus saved us but we’re not gloryhunters’