John McCormick writes: Ben Knapman writes a fan column for the Fleetwood Weekly News and Blackpool Gazette. He did a two hour run earlier this year to raise funds for the Bradley Lowery Foundation. If that’s not enough he produces a You tube blog about Fleetwood Town. And he does it all on top of his studies, which I reckon are just about to begin once again.

Yet, when M Salut was about to give up the search for a Cod Army volunteer for this week’s “Who are You?”,  Ben found the time, stepped into the breach and did an excellent job of giving us an introduction to a club few of us would have expected to be meeting in the football league.

Over to M Salut and Ben:

M Salut: just when we were congratulating ourselves on beating Scunthorpe 3-0 in a home game, you go and wallop them 5-0 at their place. What went right?

Ben We have been meaning to beat someone like that for a while now! And we were just so clinical! It was brilliant to watch! And we have goals in this team now so we punished Scunthorpe for all their mistakes. Also the referee was brilliant let play go on and let the game flow!

Has the chairman Andy Pilley taken a huge gamble with Joey Barton or are you impressed so far?

We all know that getting Joey was a risk! However so far, so good. He’s taken the club to the 2nd round of the Carabao cup and we haven’t done that before! And under his managership we have beaten some good opponents in Oxford, Bradford and Scunthorpe. I think the gamble will pay off. It’s a win/win for Fleetwood as we have him in his first job – if he’s bad we get rid but if things continues like they are he will be seen as a excellent young coach.

Be honest, what did you think about Barton when he was playing? 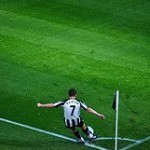 To be honest I liked Joey playing. He was a no nonsense midfielder who put a shift in and made some vital tackles. People judge him what he did on Social Media while a player but on the pitch when he was playing football he was terrific! He made mistakes but as a manager he will be different. I feel like he has really matured.

And how far can he, with ownership backing, take a club with a great stadium name, Highbury, but a tiny capacity?

You can never say Fleetwood will not go any further because we surprise people every year. When we were in League Two every body said that’s the furthest we could go but we defied the odds. I feel Joey Barton could be the man to make us a steady Championship club. The backing at the club this summer has been brilliant, paying good wages to the likes of Dean Marney who has Championship and Premier League experience!

Ched Evans is a name that leaps out from your squad list but who else do you rate and where is strengthening needed?

Ched has been brilliant – been clinical and worked hard since coming here! We’ve given him a chance to play, he’s repaid us by scoring goals! I’ve always said midfield was a weakness but with new recruits like Jason Holt and Dean Marney we have strengthened a lot. A left back would be good. We never really replaced Amari Bell. We have James Husband who has been good so far this season!

What have been your highs (six promotions in 10 years gives plenty of scope!)  and lows as a supporter?

Highs have been winning at Wembley against Burton. What a day that was for the club. It gave us a real chance to show the world what we could do on the big stage. Lows – probably losing to Bradford in the play offs! That wasn’t the best feeling after a great season of going 18 games unbeaten and having a great squad with a good head coach!

And the best players you’ve seen in Fleetwood colours?

Jamie Vardy. A clinical player that caused defenders nightmares and scored goals! Also Charlie Taylor is a good left back and probably the best player we’ve had at Fleetwood. In my opinion he’s a great player and doing well at Burnley now!

Anyone you’d rather forget altogether?

Bailey Cargill. Was slow and poor on the ball. He was here last season.

Describe the community’s support for the local side. Is there a glory seeking problem with big clubs not so far away?

We have a core 2400 home fans. It’s 10% of our Town so we do very well. People supporting big teams don’t help local teams but we have to let them get on with it. Fans don’t win games and we’ve shown that in recent years.

Just shows how the mighty can fall! It’s funny seeing Sunderland in League One – such a big club and a great club with great fans down here. But they have done it to themselves by having loads of different managers and big attitudes in the Championship. They will be back in the premier Premier League soon.

Any other thoughts about Sunderland – the club, the fans, the city and region, Jack Ross?

Like I just said, great fans! Great ground and a big team. Should be in the Premier League. They are a proper team with good players like Max Power, Charlie Wyke and loads of others.

Fleetwood Mid Table! Sunderland should be challenging for the title. I feel Sunderland will finish 2nd.

The World Cup: a distant, fading memory or something special to savour until 2022?

It’s a good memory of the summer but we have to take positives like Southgate and the squad have restored faith in the National side!

The Neymar Question: will VAR eliminate cheating or is it with us to stay

I would leave it. They got a few massive decisions wrong in the World Cup, plus it takes a while and holds a game up.

I’m Ben Knapman and a Fleetwood Town Season Ticket Holder. I go home and away with Fleetwood. I run a You tube Channel With 1,900 Subscribers  and vlog Fleetwood Town Games. And I also turn up on talk football!

Next Post
Sixer’s Stoke City Soapbox: Cats get the point of the penalty shoot out