Some days it’s good to get out. This season that could be said of Saturdays, which makes a nice change, but for some people it’s also true of Monday evenings, now that normal service has been resumed at the Eppleton Colliery Welfare Ground.

And just who are those people?

None other than a stalwart group of supporters known as the Hetton irregulars, one of whom is Pete Sixsmith. So when the U23s played West Bromwich Albion last night where do you think he was?

There are some nights when you look out of the window, sniff the weather and decide that a night in front of the fire with an improving book and a glass or two of a single malt are preferable to standing around watching 22 men chasing an inflated bladder around a grassy area.

These evenings are usually in the depths of winter so it was a surprise when those thoughts flashed across my mind in the first week of September. It had poured down all afternoon in South West Durham, the temperature had just about remained in double figures and the wind was howling more than a Newcastle supporter outside a Sports Direct retail outlet.

But, in order to satisfy the readership I braved the grim conditions and set out for Hetton where I was rewarded by the best Under 23 game I have seen in many a long day. The Hetton Irregulars, gathered under the protection of the stand instead of along the touchline, concurred with my assessment; great minds think alike. 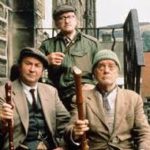 For too many years, Under 23 football was as exciting as watching a re-run of Last of the Summer Wine –it was predictable, faintly interesting for five minutes and it sometimes gave you the opportunity to see a once well-known player going down the road that Messrs Owen, Wilde and Sallis usually transcended in a bath, box cart or bucket.

However, coaches and managers want to see how young players will cope in a full-blooded game not the tippy tap version that has so bedevilled Hetton for the last few years. The Stoke City game a couple of weeks ago was decent; this one was competitive from the start. More blood and thunder than cool and collected as one chum observed.

Our line up consisted of mainly Under 20’s. Luke Molyneux was the only one with competitive first team experience although the likes of Adam Bale, Jake Hackett and Jack Diamond have appeared as subs in some pre-season games. Benjy Kimpioka has even scored for the first team in the friendly at Hartlepool.

The defence was bolstered by the inclusion of Gael Andonian, a French born Armenian international who has spent time at Marseilles (his home city), Dijon and Veria in the Greek top flight.

He is 23 years old, stands 6’1” tall and has 22 caps for Armenia, the land of his parents. He looked a decent player and I would not be surprised if he was offered some sort of contract. Maybe we could arrange for Papy Djilobodji to go and play for Ararat Yerevan in return – if they wanted him.

He looked composed and cultured, read the game well, passed the ball as effectively as anyone and tackled cleanly and competently – so unlike our own dear Papy.

As an Armenian, he no doubt looks to Henrikh Mkhitaryan as his sporting hero and maybe to Anastas Mikoyan as his political guide and mentor. He was the great survivor of Soviet politics, a man who was a contemporary of Lenin, Trotsky, Stalin, Khrushchev and Brezhnev and was the perfect Party apparatchik. He watched friends, comrades and enemies disappear into the mortuary or the gulag (same thing really) and always emerged as a survivor. He was about to be purged in 1953 when Stalin had his stroke and died and he became a prominent figure in guiding Khrushchev to the top of the party and aiding him with his de-Stalinisation policies and rising to Deputy Prime Minister. It was said of him that “the rascal could walk across Red Square in a rainstorm without an umbrella without getting wet. He could dodge the raindrops.”.

And now back to the football. Albion started well, looked quicker and sharper but we gained a foothold in the game and when their centre half Kyle Howkins failed to live up to his name by howkin’ the ball over the Bob Paisley Centre, the impressive Luke Molyneux nipped in and chipped Brad House in the Albion goal to open the scoring.

Molyneux was busy for the 63 minutes that he was on the pitch and he went off to a round of generous applause from the 186 hardy souls who turned out on a wretched night. His replacement, Jack Diamond, was to make his name a few minutes later. As for Molyneux, he may well be in the first team squad tonight.

In the meantime, Andorian’s central defence partner, Jack Bainbridge, who, up until this point, had appeared to benefit from the Armenian’s presence, dropped a short back pass to keeper Anthony Patterson. He came for it, stopped, retreated and was left embarrassed as Kyle Edwards rolled in the equaliser.

It was set for a Baggies Boing-Boing, but Diamond had other thoughts. Latching on to a ball played out from the defence, he ran at the 35-year-old Tyrone Mears playing at full back, beat him and fired in a shot at the near post which may just have taken a touch from a defender before beating House.

And that was the end of the scoring. As the Throstles tired, Kimpioka came into the game with some effective running which offered much relief to our hard-working defence and midfield, a midfield in which Adam Bale was outstanding. He looks keen and well disposed to a run out in subsequent EFL Trophy games.

We floated on air back to the car and listened to the eulogies being delivered to Alastair Cook by Michael Vaughan, Graham Gooch and Andy Flower. A fine batsman and an all-round decent bloke was the considered verdict of all three. I wonder what Gael Andonian’s view on Cook was?