Malcolm Dawson writes……..in his programme notes Charlie Methvin spoke of the mixed emotions he would be feeling as a lifelong Oxford United supporter, now involved in the ownership and organisation of Sunderland AFC. I have to wonder what sort of mixed emotions he went through as the game progressed.

With his red and white hat on, I should think maybe a mixture of frustration at a team who were knocked off their preferred playing style by physical opponents not averse to employing underhand methods, abetted by as incompetent a refereeing display as I have ever witnessed, tension as we played out most of the match with only ten men and having equalised having to hang on with tired legs and opponents pushing for an equaliser and ultimately pride in a battling performance which saw us gain a point in the most trying of circumstances.

From his yellow and blue perspective I should think he would be encouraged by Oxford’s footballing display but I would hope have been embarrassed by their spoiling tactics and employing what appeared to have been a deliberate policy to con the referee. Max Power only has himself to blame for the red card and though some officials may have deemed it a yellow card offence, it was a reckless challenge, unlikely to ever win the ball cleanly. But the benchmark had been set as early as the twelfth minute.

In the type of incident that those in the ground could see clearly but which may not have been picked up by the TV cameras, Chris Maguire was trying to find space on the halfway line to offer Jon Mclaughlin an outlet to set up a quick counterattack. He was being physically held and manhandled by an Oxford defender, obviously worried by his pace and ability and prevented from going anywhere. Did the linesman see what we saw? If he did then surely it would have been a free kick to us and a yellow card to the man in blue. Instead, as Maguire tried to extricate himself the United player fell over clutching his face. The resultant free kick and yellow card against Maguire, was only the first of a number of poor decisions and our players were getting increasingly frustrated.

I may question the morality of the Oxford United tactics but there is no arguing against their effectiveness. But then you haven’t come here to read my whinging on about referees and dubious opponents. You’ve come to read what Pete Sixsmith thought of a game in a league which is proving to be anything but boring. Over to Pete. 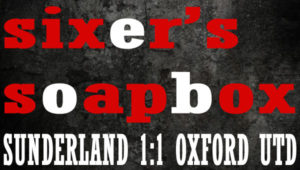 And so we arrive in the land of reality with an almighty bump.

After three wins in a row, there was the hope that we could make it four by beating an Oxford United side who have struggled in the infant days of the season, but who have won their last two games in League and Cup.

The last home game saw us sweep aside a hapless Scunthorpe side within half an hour. They sacked their manager a couple of days later. We had played well with Max Power and Chris Maguire opening their accounts for the club and both looking like good acquisitions – feelings that were enhanced at Gillingham and AFC Wimbledon.

Fast forward two weeks and by the half hour mark we were a goal down, a man down and with three others on yellow cards. The free-flowing football that put paid to Scunthorpe was nowhere to be seen as we stuttered and scrambled about, allowing a determined and street wise Oxford side to take control of the game.

Which is more than can be said of referee Mark Heywood. The Cheshire based official had a shocker, not so much for what he did but more for what he didn’t do. I have no arguments about the sending off of Power. Maguire and Cattermole had both been booked earlier and for the midfielder to put in the challenge that he did on Marcus Browne was foolish to say the least. A late tackle in front of a clearly out of his depth referee was not the wisest move that Max has made.

Sometimes refs need no encouragement to brandish the red and Mr Heywood was one of them here. Power had started poorly and was being kept out of the game by a strong and well organised Oxford midfield. By committing such a crass foul, he was heaping pressure on his team mates and I would be surprised if Jack Ross bothered with an appeal.

Maguire had started equally poorly against one of his old clubs, Oxford being one where he is highly thought of. He was the first player to be booked in the 12th minute for a foul on full back Cameron Norman and from that moment on, his head appeared to be in the process of disintegrating. Lee Cattermole followed him two minutes later for what Mr Heywood deemed a foul on Shannon Baptiste and from the resulting free kick, Ricky Holmes curled the ball over the wall and past John McLaughlin to put Oxford a goal up. 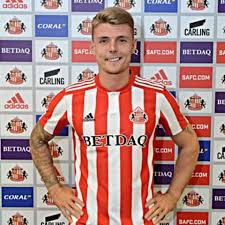 Three minutes later Power was on his way to the dressing room but not before he had a spat with one of the Oxford coaching staff and any game plan that the manager had drawn up was in tatters. Fortunately, we managed to hold out until half time but we could easily have been down to nine men as Maguire continued his feud with Norman and Mr Heywood showed some restraint in this situation, something for which we should be grateful. However, before we begin to think that the man in light blue was having a decent game we should look at two incidents.

First of all, Gooch was pulled to the ground by an Oxford player and then when he got up, he was booked despite the foul being committed by Brannagan. This brought howls of derision from the terracing and began to mask what was turning into a Graysonesque performance from our heroes.

Then, on the stroke of half time, Alim Ozturk, who had a good game, made a splendid tackle on the edge of the box to dispossess James Henry only to see a free kick given in exactly the same position from where United had scored. Fortunately, Holmes’s effort hit the wall and went behind.

Changes were made. Maguire was withdrawn for his own safety and Charlie Wyke appeared. His physical presence made a difference and when Maja played a crossfield ball to Gooch and the winger put a low cross into the box, the former Bradford City man was there to level the scores with a right foot shot.

We were back in the game.

Maja missed a chance. Gooch missed a chance. Oxford appeared to be rocking but we could not push our noses out in front and United gradually got back in the ascendancy. McLaughlin failed to cleanly gather a shot and Mackie put the ball in the net. Fortunately, the assistant referee raised his flag for offside as the ghost of Jason Steele appeared over the South Stand. By this time, Maja had been replaced by McGeouch which gave the midfield some much missed quality. He showed what a good player he could be for us, bringing the ball out, winning tackles and generally looking a class above Division One (Three).

When the final whistle went, the general consensus was that we had dug deep and got a point despite playing badly.

For much of the game we lacked co-ordination, physicality and quality.

The arrival of Wyke and McGeouch made us look better but the original team selection did not pass muster. This was an opportunity that we did not take as Peterborough lost their unbetaen record and had we played as well as we think we can, a win would have sat us on top of the division. But the commitment and the effort of the players was never in doubt and we probably just deserved a draw although the large number of Oxford fans who attended may well disagree.

They will soon move up the league. In Karl Robinson they have a solid manager and he has some good players to call on. I particularly liked Shannon Baptiste (No.26) who had an excellent game and was a thorn in our side throughout. One to look out for in the future.

As for Mr Heywood, he was not the reason we failed to win. But he did have a poor game and I would be surprised and disappointed, if the Heywoodmobile left Cheshire to cross the M62 for Sunderland again this season.

And next week we welcome Joey Barton.

Next Post
Sixers Sevens: Oxford United fight us to a draw