Pete Sixsmith once again dips into his magic memory to bring you a trip to the land of contrasts: bashed metal and heavy metal: old canals and new motorways: Aston Villa with their football league glory and a historic stadium and erm, Walsall who, literally, are in a different league.

Nowt wrong with that, though, as Pete makes abundantly clear.

I have been to the Bescot Stadium once. It was not to see Sunderland.

We have played there twice. The first time was a League Cup game in 1999 and we won 5-0 with goals from Danny Dichio (2), Eric Roy and Carsten Fredgaard (2) and then again in March 2004, the year we lost out in two semi-finals to Millwall and Crystal Bloody Palace. The scorers that day were Julio Arca, Kevin Kyle and Marcus Stewart.

Instead of wallowing in a splendid win, I was at Kingsway in Bishop Auckland, watching the home team draw 3-3 with Rossendale United (deceased) as Shildon were presumably without a game. I do remember listening to the goals fly in at the Bescot and kicking myself for not going.

I ticked it off in September 2005 when I took advantage of the international break to take in Walsall’s home game with Swindon Town. I had no connection with or interest in either side and just fancied a day out on the train. I travelled to Birmingham New Street, wandered around that hell-hole of a station for ages and then caught the stopper to Bescot.

I was made welcome in the Walsall Supporters’ Club bar, sat in the main stand and watched a pretty ordinary game between two average Division Three (One in new money) teams. It was heading for a goalless draw until the Saddlers’ midfielder Craig Pead scored in the last minute to send the Walsall fans home happy and the Swindon support chuntering all the way back to the home of The Magic Roundabout.

I did get to see us at Fellows Park as we played there a couple of times in the late 80s. The game I saw was on the 5th September 1987 in our inaugural season in the third level. Under Denis Smith we had started well and had gone top on Bank Holiday Monday by crushing Mansfield Town 4-1.

I travelled with Pete Horan on George Thompson’s bus from Shildon. This was a remarkable coach in that it was one of the few that had an onboard toilet. This consisted of a funnel attached to a tube which was then put out of the side window next to the door. Alcohol was freely, if illegally, consumed and there was a steady stream of mildly intoxicated passengers using the “Mary Loo” as it was known.

Approaching Walsall and knowing the reputation of the West Midlands Police for being even less pleasant than your average Stasi officer, we stopped alongside a canal in order to dump the large number of empty cans. George meticulously collected them, bagged them and threw them over a hedge in the direction of the aforementioned artificial waterway, one that is so beloved by anglers.

There was one sat behind the hedge who was somewhat surprised to be hit on the shoulder by a bag of empty beer cans and then to see another two bags hit the water and sit there. We made our excuses and left. 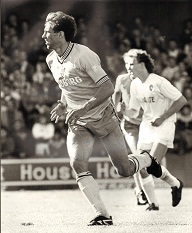 The game was a good one, against a side who accompanied us into Division Two via the play offs. It ended 2-2 with David Kelly opening the scoring in the 20th minute and Keith Bertschin equalising against the club he would join ten months later. Craig Shakespeare restored the Saddlers’ lead in the 65th minute before Bertschin (soon to lose his place to a young tyro called Marco Gabbiadini) levelled again with six minutes left. Both sides had put down a marker for the season and both were deservedly promoted at the end of it.

The crowd was 6,909 and it will be interesting to see how close that is to the crowd on Saturday.

Fellows Park was a wonderfully old fashioned ground, full of pillars and nooks and crannies and tucked away in a corner of the town. The Bescot is a perfectly adequate new build, highly visible from the M6 in the shadow of the RAC Control Centre. It’s a fair way out of the town centre and not even the most loyal Walsall lad would describe it as a lovely town. It does have a splendid Victorian park and an arboretum that is highly regarded by connoisseurs of such things. Like Chicago, it has a leather museum. Unlike Chicago, Frank Sinatra never recorded a song about it; “Oh Walsall, oh Walsall, that toddling town” neither scans nor has a ring about it.

It does have a tradition of producing famous actors. Frank Windsor (John Watt from Z Cars), Peter McEnery (Mr Sloane in Entertaining Mr Sloane), Sue Nichols (Reggie Perrin’s Secretary and Audrey Roberts in Corrie when it was good) and Jeffrey Holland (Spike from Hi-de-Hi) are all Saddlers, as is Noddy Holder who was made a freeman of the Borough of Walsall in 2014. 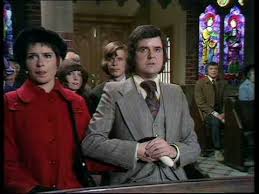 But the jewel in the crown of famous Saddlers is Jerome K Jerome, the author of Three Men In A Boat, a genuinely funny Victorian piece of travel writing about, er, three men in a boat who travel down the Thames with a dog called Montmorency. They have many amusing incidents on the way from Oxford to the capital.

I saw a version of it in Darlington many years ago when Rodney Bewes played all the characters (bar the dog) and made a jolly decent fist of it. However, I could never look at the late Rodney without thinking of Robert Scarborough Ferris, a truly great straight man to the person we’d all secretly like to be, Terry Collier.

The Fellows Park photo is captioned “copyright Dave Couseins”. We have been unable to find any weblink to request permission to use the photograph. If there is any copyright claim, not answered by ‘fair use’ exemptions, on this and other images used to illustrate our report, please make us aware and we will add credits or remove as requested.

3 thoughts on “The First Time Ever I Saw Your Ground: Walsall, the Bescot Stadium and Fellows Park”

Next Post
Walsall Who are You?: (1) ‘SAFC-Newcastle the most antagonistic game I’ve seen’