We did the first time last season so I have had a trawl through the (fading) memory bank and have come up with a bit of a classic between The Black Cats and The Tykes that took place just over 20 years ago.

You don’t need me to remind you that that was the season when we won Division One with a grand total of 105 points. It was the season of Quinn and Phillips, Summerbee and Johnston and Makin and Gray. It was probably the best Sunderland side I have seen, apart from the 1964 promotion winners and even now, two decades on, it brings tears of joy to remember their achievements.

Thirty-one wins, ninety one goals scored, 105 points, an average attendance of 39,000 and a narrow defeat to Leicester City in the Football League Cup semi-final. That was a year, and one which we have never really replicated. 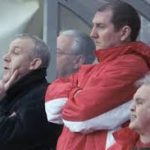 Peter Reid was in his pomp and could do no wrong. Along with Bobby Saxton, they tapped into the heart and soul of the club and looked as if they could create a dynasty at Sunderland. The football was at times scintillating and every Sunderland supporter loved going to the game.

Watford were seen off 4-1, Oxford United were demolished 7-0, there was a wonderful fight back at The Hawthorns where we were 2 down at half time and came back to win 3-2, courtesy of a late goal from Kevin Ball.

By the time Barnsley arrived, we had added Bolton Wanderers (away), Crewe Alexandra (away) and Grimsby Town (Home) to our list of conquests and we sat atop of the league, where we stayed until the end of the season.

But sometimes, you have a negative vibe about games and I had one about the arrival of the Tykes. (the season review chose to ignore Pete’s Premonition [ed]). They had just had their single, momentous season in the Premier League, were sat comfortably in the middle of the table and had some useful players. The chief one was a rambunctious centre forward called Ashley Ward.

His school career was not auspicious. He attended a school in Middleton which played rugger and lacrosse, both violent and tedious games, which hardly prepared him for a career at a pre-UAE Manchester City.

After one game for the Maine Road outfit, he moved around to Wrexham, Leicester City and Blackpool before finding a niche at Gresty Road, the home of Crewe Alexandra. Success in the lower divisions earned him moves to Norwich City and Derby County and then to Barnsley as they prepared for their sole season in the top league. He did well at Oakwell, scoring 20 goals in 46 games one of which came in this game at the Stadium of Light.

It’s a game that has gone down in the memories of the 40,231 who were there, for the six minutes of mayhem between the 33rd and 38th minutes. 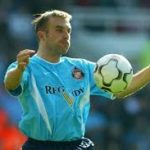 33 Mins; Ward takes advantage of a poor back pass by Darren Williams and puts Barnsley 1 up.

36 Mins; Ward is brought down by Williams in the box but blasts the resultant penalty over the top.

38 Mins; Ward stamps on (yes, you’ve guessed it) Williams and is sent off.

Poor Williams made another error at the start of the second half and Bruce Dyer made it 2-0 before the big guns came out. Martin Scott converted a penalty in the 63rd minute and Quinny (on for Calamity Darren) equalised nine minutes later.

We sat back expecting a winner at any moment but Darren Bernard won the game for them with a penalty which if memory serves me right, Bally gave away. The Barnsley support in the South Stand went crazy and we felt the bitter taste of defeat for the first time that season.

Ward moved on after that to Blackburn Rovers, Bradford City and finally Sheffield United, where the goals began to dry up a bit and he retired in 2005. Not for him a tobacconist’s shop or a pub. He had prepared well and moved into a life of property development with his wife Dawn.

She was a classmate of Ryan Giggs at school in Salford and caught the eye of Ward when he walked into a pub and he saw her behind the bar. Many of us have taken a shine to a comely barmaid, but Ashley went a bit further than I would have, in that he proposed to her in the car park of the pub that very day (or so we thought, but see below or right). Talk about being bold!!!

Since then, they have built a business empire based on nursing homes and commercial property and they live in some splendour at Warford Hall in Cheshire. Dawn regularly appears in The Real Housewives of Cheshire and Ashley has popped up in this televisual feast on occasions.

As some members of the PFA are looking to oust Gordon Taylor as their union leader amidst tales of mass bankruptcies amongst players who have retired thinking they are set for life, Ward is an example of a professional footballer smart enough to know how to handle the large sums of money he has earned. He maybe wasn’t the greatest player who ever put on a Barnsley shirt, but I bet he’s the richest.

The Barnsley squad that arrives for this game may well have a budding millionaire in its ranks but it is to be hoped that they can be sent home without a win bonus to add to their savings.

Season review posted on Youtube by jointhemasquerade on 13 Apr 2017. Dawn and Ashley Ward clip posted on Youtube by Comedy Central UK on 15 Oct 2018. If there is any copyright claim, not answered by ‘fair use’ exemptions, on the clips or the images used to illustrate our report, please make us aware and we will add credits or remove as requested

1 thought on “The First Time Ever I Saw Your Team: Barnsley, nostalgia and an everyday housewife (honest)”