Monsieur Salut writes: which of the Newcombes, father Gary or son Kieran, a) appears in the photo and b) answered our questions? Not sure about the photo but we can take it Gary answered the questions since the responses suggest a longer stint as a Blackpool fan than that of his lad. Kieran’s lips are sealed beyond saying ‘they’re the bear’s answers’ so here, before the exceptional treat of another look at replies the late Jimmy Armfield once gave us, is the Bloomfield Bear, complete with a succinct reference to the afternoon at Wembley that brought a fairytale season back in the top flight after 40 years, if one with no happy ending.

And then he can work out how to entertain home fans PLUS 8,000 Sunderland supporters on New Year’s day …

Salut! Sunderland: Eighth top as I write – how good are you and how realistic is it to aim for the playoffs?

Bloomfield Bear: from my point of view, the team are definitely over achieving this season. When Gary Bowyer left after the first game of the season it did cause some worry over whether we would stay up as the man did a great job in his time with us.

Terry McPhillips deserves huge credit for carrying on Bowyer’s great work and has done a superb job. There’s a great team spirit in the dressing room and the lads are fighting for the shirt. I just feel we are a couple of players short in terms of fighting for the playoffs. This is Blackpool though so don’t write us off.

Who is doing the business for Blackpool this season?

Armand Gnaduillet is our top scorer and has been consistent this season. Most of the credit needs to go to Mark Howard (our goalkeeper) and Curtis Tilt our centre half. I wouldn’t be surprised to see Tilt in the Championship within the next year.

I loved Jimmy Armfield and will reproduce a great interview he did with us (we recorded his death at this link). What part of his spirit lives on?

It caused a huge amount of sadness when Jimmy sadly passed earlier this year. He was Mr Blackpool and a huge part of the town. A school has been built in the town after the great man named the Armfield Academy.

It’s always been a rollercoaster of a ride supporting Blackpool. Similar to yourselves we are never just a midtable side. It’s always either fighting for promotion or against relegation. Going down from the Premier League was a tough one. We didn’t deserve to and we surprised many people that season.

Best players you have seen in your colours?

In my 19 years it has to be Charlie Adam. What a left foot and a huge part in our promotion. David Vaughan next to him midfield was the key to allowing Adam having his free role. It was a special time.

This morning before writing this I have been watching your Netflix documentary. What a fan base may I say. I haven’t been to Sunderland so don’t know too much about the place. Jack Ross has come in and settled everyone down. Signed some good, young and hungry players and you’re doing well currently.

Hand on heart where will our clubs finish?

Are you allowed to break free and say who you are or must we know you only as the Bloomfield Bear? Describe your role…

The bear has been in our family for 14 years now. Four Wembley appearances, the fastest mascot in the North West. On a matchday it’s about greeting our guests in the hospitality lounge and our Young Seasiders. I love doing a lot of charity work and have ran the Blackpool 10K as Bloomfield Bear.

What will be the score

AND NOW FOR THAT PROMISED TREAT, REPRODUCED AS PUBLISHED AT THE END OF 2010 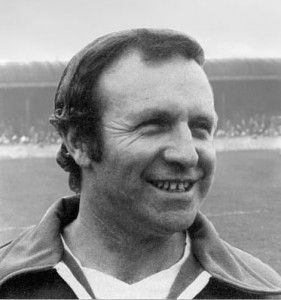 Jimmy Armfield*. Placed together in that order, they are two of my favourite words in the English language. There have been better footballers and managers, though he wasn’t bad himself, acclaimed during the 1962 World Cup in Chile as ‘the best right-back in the world’ and later doing good work in charge of Bolton and Leeds. There have been better sports commentators. But he has a depth of knowledge and utterly dependable expressive qualities that most of them must envy. We desperately hope the result from the Stadium of Light tomorrow comes as a bitter disappointment to him – a robust comeback after the also-ran display at Old Trafford is a must [oops: Blackpool won – Ed]- but we salute Jimmy Armfield all the same and offer our warmest best wishes to a wonderful voice of the game who played his entire Football League career for one club: tomorrow’s opponents Blackpool …

How has the decent start [Blackpool went down but had been eighth top at the end of the year – Ed] been achieved?

The players have surprised us all – and I might say those around the club, It’s as simple as that. Just look at the salaries. They don’t match up if added together to just one player at certain other clubs.

And what does it mean for football?

I think it gives hope to the smaller clubs in the Championship that one day they might do the same. It’s been like a fairytale but what it has done is to give hope to a lot of what I call the town clubs a bit like Blackpool. Don’t forget we were in the lower divisions for nearly 30 years.

Yes. In my time, of the 19 years I played for Blackpool, only two were in the old Second Division.

When the season started in August, what were your minimum and maximum expectations for Blackpool?

My minimum expectation was that we’d be in trouble. The maximum was fourth bottom. We just didn’t realise what was possible. There is still a long way to go, the club is under no illusions about that as you can tell from the manager’s quotes each week in the local paper. You only have to get some injuries or suspensions for things to go wrong. But yes, I’d be thrilled to bits with fourth bottom.

You know football inside out so name this season’s top four in order.

At the top, it’ll be between London and Manchester. But as far as the bottom three are concerned, it really is just too hard to say. When you look at the league this season, there are still any of 10 clubs that could go down. It’s the first time the Premier has been squeezed together so tightly. At the top, all our main teams are through to the next stage in Europe; they are making all the money and it’s a bit of reach of the rest.

What thoughts do you have on Sunderland AFC?

I played at Roker Park a few times, not at the new place of course. I used to like Roker, it was a good ground. the first time I played there, it was a 0-0 draw but I remember it because Charlie Fleming got a penalty in the last minute. Len Shackleton said he would take it, there was a bit of an argument but Charlie insisted. “You’ll never score,” Shack told him and Charlie hit it five yards over the bar. I saw Len just before he died: he’d been a real character and still was. I remember seeing him knocking the ball so it came back to him off the corner flag, and – when he was a young player at Bradford – sitting down on the ball during a match.

Salut! Sunderland So did you ever have the chance to go and play for Sunderland?

We ask everyone this question, Jimmy: is it time to abandon high-minded ideas about cheating – diving, feigning injury, trying to get opposing players booked or sent off – and accept it as part of the modern game? Or do we keep trying to stamp it out?

No, I think we should be concerned about anything that is not in the rules. I am forever telling young players: ‘If you’re going to be a good player, you must play to the rules as best you can.’ I know professional footballers are in it for the money. I understand that. But we should stand on the side of right. It is not always easy to tell if someone is feigning injury or genuinely been tripped, and I have sympathy for referees, the game is much quicker than when I played so it’s that much harder.

Will you be at our game/s (the game at the SoL on Dec 28 is followed by the return at Bloomfield Road on Jan 22)? What will be the score?

I don’t get much to away games but I might be at the home fixture. Blackpool are second favourites every game, no matter who they’re playing. As for how it will go, we’ll just have to find out. I get it wrong whenever I do try and would be a millionaire if I really could predict scores.

What did you make of the Fifa vote to award the 2018 World Cup to Russia and not England?

Oh, I don’t know much about that. I’m more interested in which teams qualify and who we play, more interested in the football than the venue. And I’d love to see our team do better. There are more English players now in the Premier League: I like young Henderson he’s OK and he’s only a young lad. And Lee Cattermole, he’ll be all right when he gets his head on.

Looking back, what kind of life has football given you?

Wonderful. The best pay I ever got was £70 a week but the game has been good to me, all the connections I’ve made, the life I’ve had. I gave up university to make it my career and feel very privileged that it worked out.

OK, is that enough, mate?

More than enough, Jimmy, even if we might also have asked about how you get on with other BBC football pundits and commentators, Stanley Matthews and the secrets of church organ playing. Top man for doing it – and for doing it so well. More plaudits can be seen by clicking here.