Regular readers will know that the Salut team make occasional appearances in the official matchday programme. Recent visitors will know that my last contribution came at the end of 2018, when I wrote about my take on the year before the Shrewsbury game.

However, that piece only came about after Sunderland had to fit in an extra cup game following our draw at Walsall.

I was originally asked to do something for the Bristol Rovers programme, with a focus on League One’s promotion challengers over the Christmas/New Year period. The extra game forced a change to the timetable and then other events took over, with the result that the piece I duly sent off never made it into print.

That pre-Bristol piece contained references to four of the clubs we’ve been following since the start of the season – Portsmouth, Peterborough, Charlton and Barnsley (but not Coventry*). An update on their situation is due so I thought that rather than scrapping it I’d use  the piece as the starting point and go on to include Doncaster Rovers and Luton Town, who aren’t doing too badly just now and well deserve a mention.

Here, then, is part one of my mid-term review – the unpublished programme notes from just about a month ago:

“December 2016 began with a win against Leicester which lifted us to eighteenth in the Premiership but the rest of the month wasn’t good. We did win again – Watford at home – but before then we were knocked out of the EFL trophy by Wolves and beaten at home by Chelsea, then we lost again at Old Trafford on Boxing Day and Turf Moor on New Year’s Eve before drawing with Liverpool on January 2nd. The New Year brought Brian Oviedo and Darren Gibson (and Joleon Lescott), plus Patrick van Aanholt’s exit, but we didn’t – or couldn’t – improve the front line, even after Victor Anichebe was ruled out until April. By the end of January we were bottom again, and we stayed there.

At the same time, but two leagues lower, another team of red and whites were showing us how to do Christmas. Sheffield United lost their second round Cup tie at the start of December but they were celebrating their sixth win in a row as the third round results came in.

The Blades went on to win League One, which set up a Boxing Day meeting at Bramall Lane. We travelled with some optimism after a win and two draws only to go down 3-0, and although we recovered to beat Nottingham Forest on 30th December a home loss to Barnsley on New Year’s Day meant we began 2018 in bottom place. Lewis Grabban left a few days later and we didn’t – or couldn’t – get a decent replacement (Kazenga Lua-Lua, anyone?). We were destined, like the season before, to stay bottom. 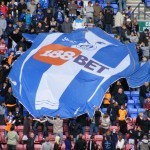 Meanwhile, back in League one, Ebenezer Scrooge had taken up residence in the DW Stadium. Wigan gave nothing away but grabbed points everywhere. Fleetwood Town, AFC Wimbledon and then Oxford were despatched before Christmas, with 13 goals scored (three of them by Max Power) and none conceded. 0-0 draws with Shrewsbury and Charlton followed and then came another clean sheet in an away win at Northampton on New Year’s Day.

Those fourteen points from a possible eighteen don’t sound as impressive as Sheffield’s full house but none of Sheffield’s opponents finished in the top half and two were relegated, whereas Shrewsbury and Charlton finished third and sixth respectively, so it’s not a bad record. By winning four games and not losing against promotion contenders over the festive season Wigan did a lot to ensure they finished top some six months later.

Our last two seasons illustrate how a poor run at Christmas can leave a club with hope draining and little prospect of bringing in improvements. Sheffield United and Wigan show the opposite. A good run will create spirit and boost morale as winter begins to take its toll, which you don’t need to be told after what we’ve done this season. And it won’t hurt any club’s chances of keeping key players and strengthening the squad when the transfer window opens.

Does “good run” mean winning every game over the holidays? I think not. Wigan, rather than Sheffield United, point the way. We don’t need to win all of our Christmas/New Year games, just some of them, but we really don’t want to lose to Portsmouth or Blackpool.

Portsmouth must be thinking along similar lines. They won’t want to lose to us but they have to play Charlton and Barnsley before we arrive. That’s three of the top six clubs in successive weeks, followed by Gillingham and then a trip to Fleetwood. Faced with fixtures like that, how many points from a possible fifteen would make you happy?

Not that Portsmouth are the only club with a tricky Christmas. After playing Portsmouth Barnsley travel to Blackpool and then meet Peterborough, Charlton and Luton, four of the other five clubs in the mini-league that is third to eighth place.

Barnsley will find January a lot easier than December but they won’t want to get there needing to recover lost ground, especially as our win in November opened the tiniest of gaps. Nor will Luton, where the reverse is the case. They appear to have a decent December but play Portsmouth, Sunderland and Peterborough in early January, FA Cup permitting.

I could go on. The next four weeks have so many games between promotion and playoff contenders that any club which managed to emulate Wigan, never mind Sheffield United, would be doing very well indeed. They would get more than points. Coming out ahead of rivals at this stage of the season would provide an immense psychological boost.

It still wouldn’t be job done and April’s fixtures (Sunderland play Peterborough then Portsmouth, and Luton play Charlton then Blackpool) are likely to ensure the promotion chase goes right to the wire. Nevertheless, Christmas and early January remain crucial, which for us means holding our own away and completing doubles over Bradford and Shrewsbury at home. I’m not one for predicting results or tempting fate, and am all too aware there are no easy games in this league but I think we can do that, and I can see us still being in contention when the decorations come down.”

*If you want to find out how Coventry came to be there these might help: