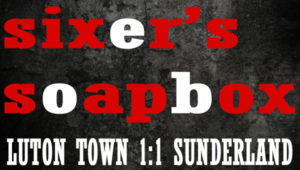 John McCormick writes: I woke up this morning feeling fine and decided that, as Pete Sixsmith had introduced a musical theme with Roy Harper, I should continue it.  I hope the title and  my opening make him and our other Pete (the Wrinkly one) happy together, not to mention our readers. Which begs two questions*,

“Is happiness sweeping this club of ours, or is it too soon to know?”

We do know things can only get better and it looks like it’s getting better all the time, although there will be those who say it’s early days and there’s nothing to get hung about.

Pete Sixsmith’s report, which I think can be summarised as Good Day, Sunshine, says more or less the same, only he does it better, which is no surprise as nobody does it better.

And so, it starts again.

The 5.00 alarm, the sensible breakfast (fruit and yogurt), the dash down to the paper shop to collect the morning papers hoping that the delivery van has not broken down (it hadn’t) the ritual picking up of Paul and Ronnie and then the car park at the back of Spennymoor Town Hall for 6.45 and the regular band of intrepid travellers. 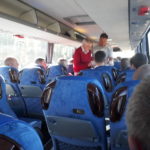 The coach arrives on time. Old friends are greeted for the first time since April, the usual seat to the rear is taken, there is talk of holidays, rugby league, family events and, for those not to be in the fortunate position of the Mazda 3, the prospects of retirement.

The coach passes through County Durham, three bits of Yorkshire and pulls into services where there are holiday coach transfers taking place. The coach parked next to ours is heading for Southampton and the passengers are looking forward to a Mediterranean cruise. We are anticipating the Oak Road End at Kenilworth Road.

On we go, through Derby, Notts and Leics before we enter Austerity Central aka Northamptonshire, a soon to be county of no libraries, bus subsidies, children’s services and provision for the elderly due to their slavish devotion to the needless austerity programme imposed by Cameron and Osborne and continued by May and Hammond. 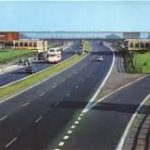 Finally, we roll into Buckinghamshire and the charming market town of Newport Pagnell, hitherto never visited. Its fame lies in the fact that it is the site of the first motorway services station in the UK to be open to all traffic, as I am sure you all know Watford Gap was originally for truckers only, hence Roy Harper’s song about it (Watford Gap, Watford Gap. Plate of grease and a load of crap). People drove especially to Newport Pagnell services just to sample the food in the American style Grill and Griddle and to put hard earned money in the pockets of Fortes and Blue Star who ran the franchise. Living the high life in the early 60s with a sauce bottle in the shape of a tomato….. 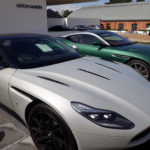 The town’s other claim to fame is that for many years it was where Aston Martin cars were built. The company has moved production to Gaydon near Leamington Spa, but the restoration department is still there. I popped into the dealership to ask if they would consider exchanging one of theirs for my humble Mazda, but they seemed somewhat disinterested so as the News of the World used to say, I made my excuses and left.

Newport Pagnell is a pleasant small town and the Boys from The Bus behaved themselves and contributed to the NP Landlords’ Tenerife Holiday Fund by consuming a fair bit of beer. Off we rolled to Bedfordshire, only to hit a huge tailback on the M1 which led to a necessary a detour through Dunstable, followed by an unnecessary one round the bits of Luton that are off even the Luton tourist map.

As a result, we finally got into the ground at 2.55 and took our unreserved seats at 2.59. It was noted that Jack Baldwin had usurped Alim Ozturk in the back four and that Max Power had come in for Luke O’Nien with Bryan Oviedo continuing as the only player from Russia 2018 to be turning out in Division One – at least for the time being.

The first half was tight and competitive. We moved the ball around well and Lynden Gooch was a great outlet for us. He tormented his marker throughout and put in a succession of crosses that caused problems for the Luton defence.

Glen Loovens was just off target with a couple of headers, there was a claim for a penalty which referee Charles Breakspear (presumably from the Henley brewing family – or maybe not) turned down, and it was no more than we deserved when Gooch set up Josh Maja just before the break leading to the young forward creating space for himself before drilling a shot across the goal and into the far corner of the net. It looked likely that we would kick on in the second half.

And we did, at least at the start. Gooch’s shot was fumbled over the bar by Luton keeper Stech, pressure from corners was not taken advantage of and there was a feeling that Luton had weathered the storm and were back in the game.

Pelly-Ruddock Mpanzu and Alan McCormack had got a real hold on central midfield with the energetic Mpanzu pushing forward and the older former Brentford man ratting around and disrupting Power and Balli Mumba.

Lee Cattermole replaced the 16-year-old in a bid to counter this but never quite succeeded and it came as no real surprise when Matty Pearson poked home the equaliser from a corner which we did not defend particularly well.

After that, Maguire struck the bar with a free kick and Cattermole just failed to direct a header into the net, but we breathed a considerable sigh of relief when Luton’s prolific Danny Hylton missed a header from point blank range when he would have expected to score.

All in all, a draw was a fair result.

It was an entertaining game, played in a good spirit between two teams who would hope to be in the top six at the end of the season. We are light up front and I suspect that either Wyke or Sinclair playing alongside the improving Maja, would have rattled the impressive central defensive pair of Pearson and Sheehan.

Our two debutants, Jack Baldwin and Max Power, made impressive starts. Baldwin and Loovens look a better partnership than Loovens and Ozturk last week, with the former Hartlepool player (he still makes a weekly contribution to one of their funds) adding stability and calm.

Power started well and was eager to impress. He moves quickly, tackles well and although he faded as the game drew to its conclusion, he looks a real asset for this season and for the future.

Some in the crowd and on the message boards, criticise Maja for not being strong enough, which is a bit like criticising an apple for not tasting like an orange. He is not a physical player (yet) but he is very good at getting himself between the ball and an opponent and won a number of free kicks because of this. Some of our supporters need to realise that he is young and is still learning. Two good goals in two hard games is a pretty decent record.

I did like Luton, a solid team who go about the game the right way. They got up when fouled, did not roll around or whinge and they have a manager in Nathan Jones whose touchline demeanour is in direct contrast with the calmness that exudes from Jack Ross. They will do well. I even quite liked Kenilworth Road – the old stadiums are going and this is one that has barely changed over the years but I bet the people in Oak Road are not great lovers of football.

The trip home was a decent one. Radios were listened to, heads lolled in fitful sleep (the driver really must take some Pro-Plus) and the general consensus was that it was a solid point and that we would probably have settled for it at the start of the game.

Clearly another forward is needed if Sinclair is out for six weeks but patience is also required. Go back to 1987 when we were beaten at home by Chester City and still walked the league. Then, we brought in Marco Gabbiadini; we may not find such an icon this time.

*And here’s the real second question. How many songs can you find in the introduction?