GUESS THE SCORE: The Checktrade rules are simple – no extra time but penalties if scores are level at 90 minutes. For the prize mug – whoever you support – you must correctly predict the score at full time and, if the teams are drawing, the winner on penalties (don’t worry about the shoot-out score). And you must have a UK delivery address …

Sunderland have had some great moments against Man City in cup games. The 3-1 win in a fifth round FA Cup replay, on our way to Wembley glory in 1973, was one. Wembley again, for the League Cup final in 2014, was another.

We invaded London, steamed ahead thanks to Fabio Borini’s tremendous goal and should have seen him double the lead before half time. Steven Fletcher missed a good chance at 1-2 but by the end, three classy City goals had seen us off.

In that Cinderella of trophies, the Checkatrade, we face City boys not men in the quarterfinals but – as that implies – find ourselves two steps away from a Wembley return. Read again how Pete Sixsmith saw the 2014 League Cup final …

Pete didn’t quite qualify for Mr Robert Halfon MP’s tribute to “scumbag football hooligans”, missing out on the Covent Garden riot (implies Mr H) or good-natured gathering (said the cops) and travelling down on the Durham SAFCSA branch charabanc. This is his wonderful account of a great occasion we wouldn’t let defeat spoil (and the MP did have the grace to apologise, and to Salut! Sunderland no less: https://safc.blog/2014/03/robert-halfon-speaks-i-will-regret-that-tweet-for-the-rest-of-my-life/)…

So we didn’t quite veni, vidi, vici. We came, we saw but didn’t quite conquer the giants of East Manchester. But didn’t we give them one hell of a shock?

I imagine he said something along the lines of “we need a quick reply. If they hold that lead for another 20 minutes, they are going to beat us. And then, I will turn Alan Pardew on you.” 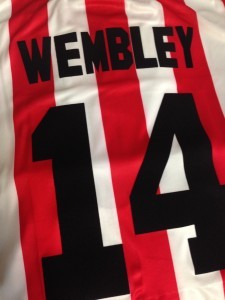 Like a huge beast being tormented by lesser mortals, City gave themselves a shake and scored two goals that were fit to win any game. Ironically, they came from players who had looked so ineffective in the first half. But Toure and Nasri are top class player; they produce when they have to.

A long, long day for a man of my years. The coach journey down was great and the pre-match beers with M Salut and the Two Johns (Jake is really called John) was tres enjoyable. The City fans in the pub were good company; they cannot believe their luck and are making the most of it. I hope that continued success does not turn them into clones of their neighbours in Stretford.

13 thoughts on “Sunderland vs Manchester City. Checkatrade Guess the Score and Wembley memories”