John McCormick writes. Like Blackpool, this one was on the itinerary I compiled early in the summer. Like Blackpool, it didn’t survive my first scrutiny of the fixture list, which is a pity as I’ve never been to the Valley and I was looking forward to it.

Pete Sixsmith has, of course, so here he is setting the scene for our second away trip of 2019 and, as he says, it’s a cracker

This one is a cracker.

Nowadays, The Valley is a neat and tidy modern stadium with the playing surface often covered in tennis balls, as Charlton’s long suffering supporters object to an owner who has lost interest in the club but is seemingly reluctant to sell. Instead of half-hearted “boycouts” and shouting outside sports shops, the Charlton folk do something that actually puts some pressure on Roland Duchatelet, the Belgian version of Owen Oyston.

Inside a week we will have visited the two clubs in our division where the fans are at war with their owners and where a fine old club may never rise again from the chaos that Messrs Duchatelet and Oyston have inflicted on them.

Then we have the Mags at home next Tuesday….. 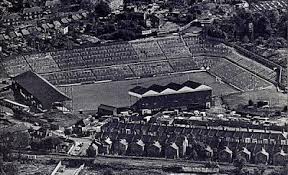 The Valley is similar to Bradford Northern’s Odsal Stadium in that it is built in an excavated pit. Odsal holds the record for an English crowd at a sporting event (102,569 Rugby League Challenge Cup Final re-play, Halifax v Warrington 05/05/54) and while Charlton’s record attendance doesn’t come close to that, it is still a very impressive 75,031 for an FA Cup tie against Aston Villa in 1938 which was a mere 87 fewer than our record attendance – a Sixth Round replay against Derby County in 1933.

Its outstanding feature was a huge terrace down the eastern side of the ground which ran the whole length of the pitch and could accommodate somewhere in the region of 35,000 spectators in the days before Health and Safety.

When I first visited it on the 15th November 1975, it was crumbling away and there was a veritable wilderness at the top stretching back to the neat and respectable gardens of the semis behind. This was our second promotion year. Having been relegated in 1958 and 1970, we were becoming well acquainted with the Second Division. We had stumbled at the end of the previous season, losing at Aston Villa in the final game to give them the third promotion spot and to consign us to another season in the second tier. 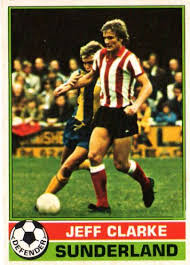 Players had left in the summer, including two of the FA Cup Winners.

Ron Guthrie had left the game to become a milkman (can’t imagine any of our current left backs delivering semi-skimmed when they pack up) and Dave Watson had gone to Manchester City, who used Jeff Clarke as part of the deal.

Clarke was an instant hit, particularly amongst the female support. He was tall, handsome and had a wonderful curly perm that had the ladies swooning and some of the men looking at him askance. He won them over with a series of excellent performances. He could tackle properly, he was sharp and, despite the perm, he could head the ball. Had he gone to an Ashington barber for his hair styling and asked for a perm, he would have no doubt received the reply,

“Certainly sir. I wandered lonely as a cloud….”

We had also signed a young centre forward called Mel Holden from Preston North End for a biggish fee. He struggled at the start and found it hard to usurp Vic Halom. This game was to be the making of him. Sadly, he died of Motor Neurone Disease at the age of 27 and we wonder now whether the early symptoms of this dreadful illness affected his play when he was at Roker.

I travelled to this one on one of Corny O’Donnell’s special trains which necessitated getting to either Sunderland or Hartlepool and then smuggling copious cans of Double Maxim aboard the O’Donnell Express. Alcohol was allowed but it was expected, nay demanded, that it be bought from the trolleys that trundled up and down the train and which only sold McEwan’s Export. I was always a Double Maxim man.

I went in a group which included Jim Reeve, a Norwich lad who watched Sunderland but who had gone to Charlton regularly when he was at University in London. He told me of this mythical terrace which, by the time he had finished his tales, seemed to be as high as the cliffs at Flamborough Head and as steep as the steepest thing that you can think off.

The journey was a boisterous one and the train arrived at Stratford Station where a fleet of buses was boarded and took us through the Blackwall Tunnell to Floyd Road. There were no tickets required in those days. You put your cash on the turnstile, the foot pedal clicked and you were in. We made for the back of the East Terrace and what a sight greeted us.

The view was stupendous. As well as looking down on the pitch from a great height, you could see right across London, round to Greenwich and all of the old East End. Canary Wharf and all the offices were but a gleam in a property developer’s eye then and the great curve of the river was easy to follow. It is a memory that will stay with me when many others have gone. 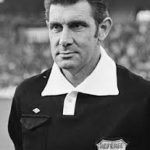 It was an important game and that was reflected in the choice of referee. We were allocated Jack Taylor, the Wolverhampton butcher, who 15 months earlier had been the man in the middle for the World Cup Final in Munich.

There he had controlled Franz Beckenbauer, Gerd Mueller and Uli Hoeness for the Federal Republic of Germany and Johan Cruyff, Johan Neeskens and Ruud Krol for the Netherlands.

Here he got Mark Penfold, Peter Hunt and Keith Peacock for the Addicks and Mick Henderson, Tony Towers and Mel Holden for us.

The full teams were; 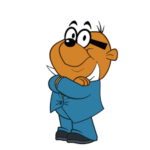 The game started badly when Billy Hughes was carried off after 11 minutes after a shocking tackle from Mark Penfold (soon to be starring in Danger Mouse) to be replaced by Mel Holden.

The substitute rule had been introduced in 1965 with Mike Hellawell as our first named substitute and Allen Gauden becoming the first one used when he replaced Hellawell in a routine 3-1 defeat at Aston Villa.

Charlton had the first ever sub in their team in Keith Peacock, who replaced injured keeper Mike Rose at Bolton on the 21st August 1965. He went on to make 532 appearances for his only club and is a revered figure amongst Charlton’s support. Note also the names of Hales and Flanagan who were sent off for fighting each other in an FA Cup tie with Maidstone in 1979. I noticed no sign of a simmering feud when I was there. 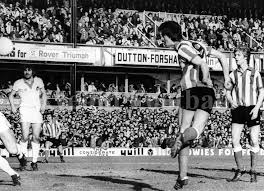 Mel came on and changed the game. He opened the scoring in the 34th minute with a tap in after Pop Robson slipped the keeper and glanced in a header to restore the lead after Derek Hales had equalised in the second half. It was a good header from a Bobby Kerr corner and one that some of our current players could do with watching. Kerr took a decent corner – always got past the first man.

There was an unsavoury incident at the end as Hales, clearly a violent man, kicked poor Micky Henderson while he was on the ground. Butcher Jack sent him off and the game ended with a pitch invasion by young boys in their best Bay City Rollers gear. You can see it on YouTube.

The journey home was a boozy one and I have no idea how I got home from Hartlepool to Shildon. I may have got a lift but if I drove, I apologise for being stupid.

That win kept us at the top of the division, where we stayed for most of the season. A similar result would be good after the glory of Blackpool.

Charlton v Sunderland posted on Youtube by SAFCFOREVER FTM, Aug 2018. If there is any copyright claim on the video or images used in this wok please let us know and we will acknowledge or remove as requested.

Next Post
Charlton Athletic ‘Who Are You?’ and the statue of a Charlton manager at the SoL