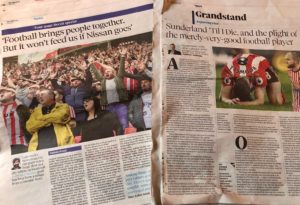 There’s an excellent sports section piece on the Netflix series Sunderland ‘Til I Die, focusing perceptively on Jonny Williams and Jack Rodwell. And there’s an interesting but incomplete feature by the author Anthony Clavane on the threat Brexit poses to Wearside, including chats with one or two of those seen in the documentary (Monsieur Salut admits to mildly sour grapes, having unsuccessfully offered two newspapers what he cheekily feels would have been a superior article).

The Observer found no room, however, for a report from our game at Oxford. But Pete Sixsmith, whose words occasionally graced its pages when Sunderland were in the Premier League, was there and he happens to be more than a match for any of that newspaper’s football writers … 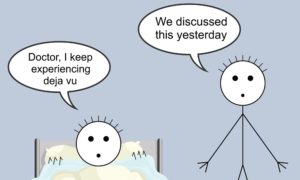 The French phrase déjà vu means already seen. We use it when we are experiencing the same thing twice going through an overwhelming sense of familiarity with something that shouldn’t be familiar at all.

It’s a pretty accurate description of too many games this season where we have taken the lead against Luton, Coventry, Scunthorpe and now Oxford, only to be pegged back late in the game and surrender much needed points.

Here, on the very farthest edge of the city of dreaming spires, as at Scunthorpe a fortnight ago, we took the lead, failed to build on it and ended up second best to a home side who were scuffling around at the wrong end of the table.

The feeling was exacerbated when the results confirmed that Barnsley and Luton Town had both won again, ensuring that any catch up for second or top place had to be executed in the next 10 days; the three home games coming up simply must yield nine points or else we are in grave danger of being left behind.

In fact, had it not been for the excellent Jon McLaughlin we would have been further behind the front two. He made a number of outstanding saves, principally one from the rumbustious Jamie Mackie in the first half, and was calm and assured throughout. Would that some of his outfield colleagues could emulate his coolness when under pressure.

For this was not a good performance and Oxford have a right to feel aggrieved that their fight against relegation to the basement division is not two points healthier this morning.

They looked brighter than we did with excellent performances from wingers Gavin Whyte and Jordan Graham combined with an energy throughout their team that we did not appear to have.

Changes were made. Out went Flanagan with Baldwin partnering Dunne and out went Wyke for the division’s record signing, Will Grigg. Max Power and George Honeyman kept their places ahead of Luke O’Nien, a move that was not particularly popular amongst a wide section of the support, while Lewis Morgan was allowed to build on his promising debut last week. Chris Maguire and Kazaiah Sterling didn’t even make the bench.

Grigg started well and played on the shoulder of the Oxford centre half. He did have the ball in the net early on when he was clearly offside but he showed enough in the 80 minutes that he was on the pitch to suggest that if he gets the right service, he will score. He needs a couple of goals to be up and running.

Despite having the better of the first half hour, we could have been three down. McLaughlin made two excellent saves while Graham put a good chance wide of the far post.

Jamie Mackie is a player I have always liked; there are no airs and graces about him. He is as rough and ready as they come and now, in the twilight of his career, he proceeded to rough up both Dunne and Baldwin – particularly the latter. Elbows are flailing when he goes up for the ball, tackles are made a fraction late and he is very adept at pushing and shoving; everything a lower league centre forward was in the good old days. If any Hartlepool supporters wander onto this site, they will be reminded of Bob Newton.

But our quality showed on the half hour when McGeady won a corner, took it and planted it on the head of Jimmy Dunne, whose thundering header was reminiscent of the King at his finest. Now we could build on this, win relatively comfortably and hope that our rivals would drop points.

In the second half, Oxford did what Scunthorpe and Charlton had done and came at us. And we were found lacking.

They seized control of the midfield, ran the ball down the flanks and had they had a really deadly forward, they would have won. We never got to grips with them and looked as likely as closing the game out as Chris Grayling is to getting something right.

Changes were made. Off went McGeady, who looked puzzled by the decision and on came Wyke. He looked reasonable and used his bulk to push the home defenders about a bit and for a few minutes we were back in control. But Oxford steadied the ship and continued to feed their wingers, with Graham giving Adam Matthews a very difficult time down our right-hand side.

By this time, the midfield had just about disappeared and needed shoring up. McGeouch warmed up but it was Gooch who came on for Morgan with 20 anxious minutes to go. Morgan had shown some promise and reminded me of Allan Johnston when he set off on a couple of runs in the first half, but he looked tired.

Gooch managed to get himself booked within ten minutes of arriving and his contribution was not great. He didn’t do much to help out James and by the time O’Nien appeared for Grigg, Oxford were in full control.

The equaliser came with three minutes to go and unlike the worldie at Scunthorpe, this one was scruffy and contentious.

Jerome Sinclair, who had come on for wounded hero Mackie, chased a through ball and tangled with Dunne. Dunne went to ground, Sinclair had the ball and showing commendable coolness, squared it to Browne who put it into an empty net.

Could Dunne have done better? Almost certainly. He turns slowly as do all three of our central defenders and he is susceptible to falling over.

Could a foul have been given? I have seen them awarded but the referee thought that Sinclair simply outmuscled Dunne.

Could Sinclair have blazed it over the bar? Almost certainly had he been wearing a Sunderland shirt, but here he reprised his cameo in the opening game against Charlton and created a positive impression among the Oxford faithful.

After that, both sides had chances to win it. Baldwin missed a good header while the home team pushed forward for a famous win in their three-sided stadium.

When Scott Oldham blew his whistle after seven minutes of added time, there was modified rapture amongst those sporting yellow and disappointment, frustration and some anger among those in red and white. The ever so slightly overused word “sh***” was uttered by many as they filed down the stairs, passing a punch up between two large and extremely drunk Sunderland supporters.

A similar result to Scunthorpe but a different day out. Instead of having to spend a couple of hours in Goole, a fate akin to having to listen to hours of Ed Sheeran, we stopped off in the quaint Oxfordshire town of Bicester, with its sandstone houses, wide main street and nearby “Shopping Village” where one can buy all the things that one does not really need.

It still has a Wimpy Bar, alas minus squeezy tomatoes that dispense ketchup, and it had an excellent coffee shop where I sipped a flat white and had a pleasant hour with Pete Horan and Clare Jeynes, his elder daughter, who has the gross misfortune to be married to a Mag (a jolly decent one, mind).

To return to déjà vu; it’s also an album by that seminal 70s rock band Crosby, Stills, Nash and Young, containing such songs as Carry On (which we don’t want to do as we are dropping points), Helpless, (which is how we supporters feel as we see our players surrender possession so easily) and Déjà Vu itself, a feeling that is certainly beginning to haunt us. 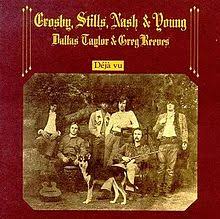 On their previous album Crosby Stills and Nash (minus Neil Young), the opening track, Suite; Judy Blue Eyes has an opening line that goes:

I have a concern that a fair few Sunderland supporters are beginning to feel that way.

Next Post
SAFC vs Blackpool prize Guess the Score. Wanted: a winning home debut from Grigg