John McCormick writes: I occasionally write about North-Western clubs and their tribulations on this website, but other than that I pay little heed to goings on in the football world outside the SoL. It came as something of a surprise to me when Swindon had their promotion rescinded and we went up instead. If you play through the second video clip – before and after the match highlights – you’ll realise that others knew something was amiss long before the game. So while I do feel for Swindon fans, I’m not going to say the club was harshly treated.

On the other hand, Pete Sixsmith, on an aeroplane somewhere over the Channel, definitely was:

We move on from disappointment in March to disappointment in May (football wise not political). This time we succumbed to a 1-0 defeat to a well organised Swindon team who had finished above us on goal difference, but who had taken but a single point from us – although it was only a late equaliser from Thomas Hauser that gave us a point at Roker.

The season is etched in my memory, not for the ultimate disappointment at Wembley but for the win in the semi-finals against Newcastle United. We would have avoided them had we not lost the final game of the season at home, which dropped us from fourth to sixth, and meant we had to face them at home in the first leg.

That wasn’t much of a game with the main event coming in the last minute. A penalty was awarded to us by referee Vic Callow and up stepped Paul Hardyman while the majority of the 22,000 spectators in the tired old ground, eagerly anticipated a few days of gloating.

Alas, Hardyman’s kick failed to beat John Burridge who got his considerable bulk down to make a good save. Hardyman lashed out in frustration and almost put Burridge’s head in the Fulwell End. Off he went.

The second leg was on the Wednesday night at The Sports Direct in front of 150,000 Screaming Geordies, most of whom decided to invade the pitch after Marco put the second goal in to win the game and the tie for us.

Referee George Courtney, who had officiated in far fiercer derbies when Ferryhill Comprehensive Staff X1 met their Tudhoe Grange equivalents, took the teams off to the relative safety of the changing rooms. Skipper Gary Bennett asked George how long he would wait to finish the game and the Spennymoor-based official replied “Midnight, Gary and later than that if we have to.”

So, off we went to Wembley for the fourth time in 17 years.

There was a complication though. The play off final was to be played on the Spring Bank Holiday Monday, 28th May. The complication was that that was the weekend of Shildon Sunderland Supporters’ Annual Away Weekend and we were all booked to go to Guernsey. At least seven of the touring party were torn between the two until the estimable Doug Bones came up with a solution.

He contacted Derek Wills, the travel agent who had organised the trip, and Derek found us flights from Guernsey to Heathrow and back on the day of the game. We took them and on Bank Holiday Monday morning, a disheveled group of Sunderland supporters, fresh from a night of trying to find a place in St Peter Port that opened for drink on the Sunday, occupied most of the seats on the Aurigny Airlines turbo prop to Heathrow.

Refreshments were taken on the flight, in bars at Heathrow and in the vicinity of Wembley. Once again, Roker Bingo had come up with some good seats (all paid for, I hasten to add – no freebies here) and we sat back and expected this line up:

to beat this one: 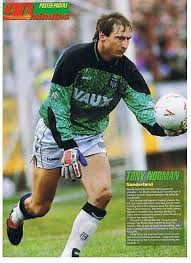 We were desperately poor. The defence made errors. The midfield never got into the game. The two forwards were anonymous. Had it not been for a stupendous performance by Tony Norman we would have lost by a cartload.

As it was, a good goal by Alan McLoughlin, a classmate of Noel Gallacher of the one-time popular beat combo Oasis, won the game for the Moonrakers and we trooped out disappointed yet again.

The real fun started on the flight home. The presence of men wearing dark suits with a bulge in the shoulder area suggested that there was someone of repute on the plane. An Aurigny employee told us that it was David Waddington.

First reactions were that there was a new edition of Monopoly being introduced in Guernsey before we realised that it was the (very) right wing MP for Ribble Valley and a Minister of State at the Home Office with responsibilities for prisons. It was thought that he was a member of the “Lock ‘em up and throw away the key” brigade.

The drink went down well at Heathrow and we looked forward top quaffing more glasses of disappointment on the hour long flight. There were few on it. Ourselves, a couple of tax exiles (all crocodile skin shoes and dark glasses), the minders and Mr Waddington, who looked down his patrician nose at the plebs in red and white who were getting stuck into a few vodkas. 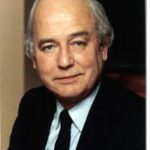 A request for more drinks was refused on the grounds that we were getting boisterous. How we could be boisterous after a playoff final defeat is difficult to comprehend. Maudlin maybe, but the vodka did not appear. The blame was rightly or wrongly, attached to the Right Honourable Member for Ribble Valley.

Bottles were produced and a rousing chorus of “If you hate Maggie Thatcher clap your hands” rang out as we took off. Comments were aimed at the executive area of the plane as we flew over the Channel to the island. One of our group, the late and much missed Steven Wilson, was upset at losing the game, at having to share his space with a Tory Minister and at not being served sufficient alcohol. I felt his pain.

On landing, we came through the arrivals area at the same time as Mr Waddington. He stared ahead but still received a volley of ever so slightly negative comments from Steven who was taken to one side and told to “button his lip or he would be able to test the cells in St Peter Port Police Station”.

Back at the place we were drinking in, (The Thomas de la Rue if memory serves) Dave Metcalfe welcomed us with pints and a bowl of oysters which went some way to making us feel a bit better. More drink was taken and Steven wandered off and did not return to the hotel until 5am. We expected to hear of the demise of Mr Waddington, found strangled with a Sunderland scarf.

Beer on Guernsey was cheaper and more unpalatable than on the mainland, where the £1 barrier had been broken while the Bank Holiday TV was hardly inspiring. 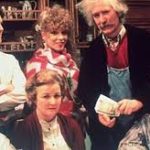 BBC 1 had a kids’ programme on called Smoggies which presumably featured people going around talking about “Our Mam” and demanding parmos and Neighbours featured twice. In the early evening, Bread, a show I never liked, featured Sunderland fan Melanie Hill as Aveline. I once stole a kiss from her outside Craven Cottage. The poor woman has never recovered. They filled the rest of the schedules up with films. Beverley Hills Cop was passable, Blue Lagoon was execrable. BBC 2 had a series of programmes on Czechoslovakia and a concert by Dizzy Gillespie from Havana.

A Wembley defeat was preferable to much of that.

Playoff v NUFC posted on YouTube by safcforever FTM, Feb 2019. Playoff final posted on YouTube by Swindon-Town-FC.co.uk May 2008. If there is any copyright claim not answered by “fair use” on these clips or the images used in this report please let us know and we will remove or acknowledge as requested.

2 thoughts on “A Wembley a Day: after Sunderland beat Newcastle, along came Swindon”

Next Post
From Sunderland and Jarrow to Portsmouth and Wembley: meet the renowned Dean family