We’ll skip 1992 and 1998, the former because it was boring and the latter because the wounds are still raw, and we’ll also say goodbye to the slum that was Wembley Stadium. Built and owned by private enterprise, it was seen as an absolute cash cow by the owners, while the FA, desperate to have their days out there, continued to use this festering heap for internationals, thereby cutting off access to 70 per cent of those who watched football. 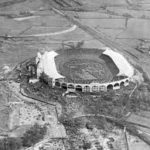 The “new” Wembley took five years to build. Down came the Twin Towers to be replaced by the Wembley Arch. The towers ended up being sold to Halton Council (Widnes, Runcorn) who realised that they were useless without a football stadium and they pulled out of the deal. 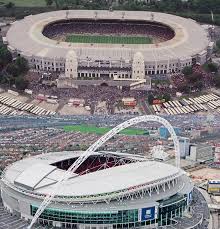 The New Wembley cost £798m, was designed by Norman Foster, the architectural practice responsible for The Sage in Gateshead, the Reichstag in Berlin and St Mary Axe in London – nicknamed The Gherkin but likened by small boys to a, well, you know what.

It has 90.000 seats in three layers, with the second layer devoted to debenture holders who have been known to turn up for the odd game. There are 2,618 toilets which is about 2,615 more than there were in the “old” one and what is more, they are not awash with urine. Venturing into Wembley 1.0’s netties was a frightening experience.

The first game there was a FA Trophy Final between Kidderminster Harriers and Stevenage Borough in May 2007 which Stevenage won 3-2 after being two down at half time. Since then, the stadium has featured numerous finals, play offs and international games as well as Rugby League, the other boring code and American Football.

It is also the HQ of The FA and it is where they dream up all their wheezes to improve the game. Next season, they are going to trial sin-bins in leagues like the Northern League and if successful, the professional game will have them. There is a school of thought that suggests that the professional leagues, with their surfeits of officials, would be a better place to do it, but what do I know? 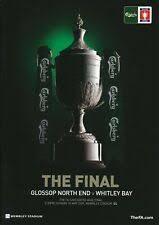 My first visit was on Sunday May 10 2009, the occasion being the FA Vase final between Whitley Bay and Glossop North End, the first time that a Northern League team, nay a North Eastern team, had appeared at the national football stadium.

Of course, in the mid decades of the 20th century they had been frequent visitors. Bishop Auckland, Crook Town, Willington and North Shields all won the FA Amateur Cup there and West Auckland were runners up. In the 90s Whitby Town had come home with the Vase and Bedlington Terriers and Tow Law Town failed to do so before it was knocked down.

I watch a lot of Northern League football and decided that this was a trip that I would not miss. Despite the fact that many of Bay fans were also Black and Whites, I took solace in the fact that manager Ian Chandler was a Red and White through and through.

Glossop were from the North West Counties League, they of Daisy Hill, Abbey Hey (a fine pair of girls) and Bacup Borough. Their claim to fame is that Glossop is the smallest town ever to have a team in the top division as North End had a single season there in 1899-1900. We beat them 2-0 at their ground but they took a point off us at Roker Park in a 0-0 draw.

They have a close link with Arsenal as Sir Samuel Hill-Wood who was born in Glossop before going to Eton and mentoring the fledgling Jacob Rees-Mogg and becoming “something in the City”. He played cricket for Derbyshire as an amateur and captained them with more enthusiasm than success.

He did a stint in the Commons as MP for High Peak and, after his retirement in 1929, became chairman and principal shareholder in Arsenal. His son, Dennis, succeeded him in 1949 and his son, Peter, took over on the death of Dennis in 1982. Peter eventually sold the family shares to David Dein, Chips Keswick and Stan Krontzke. 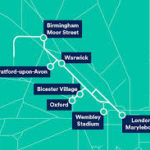 Anyway, after that digression, back to the visit.

I went with Peter and Sue Horan that day. We drove to Aylesbury and then caught the train to Wembley Stadium, a far better experience than the tube from Euston. Once there we met Harvey Harris, a good Northern League man who was there with his wife Linda. Harvey, despite being a Newcastle United fan, is a thoroughly good egg and was treating Linda to her third football match in 30+ years of marriage.

The stadium was reasonably impressive. The 12,212 inside it rattled around a bit but they were able to avail themselves of some of the 2,618 toilets and be parted from large amounts of money at the bars, food concessions and souvenir stalls. I kept my wallet in my pocket.

It was a good game which Bay won 2-0 thanks to goals from Lee Kerr and Paul Chow (whom I saw play on Tuesday night for Hebburn Town at Newton Aycliffe). Both Matt Cooper, a youngster in the Glossop goal and Terry Burke, a bit of a veteran in the Bay goal, made excellent saves but Whitley, well served by Adam Johnston (note spelling) were deserved winners and the blue and whites overcame the red and whites on that day. Hopefully it will be the other way around on Sunday.

In those dim distant days, if you had preferred to stay at home and watch a bit of telly, there was still a North East connection as Martin Shaw graced the screens in Inspector George Gently, allowing those of us who remembered the 1960s to tut and sigh and shake our heads whilst muttering “they never had double glazing and conservatories in pit houses” and the long running Last of the Summer Wine was going through its post Compo era in the Frank Thornton, Russ Abbott and Bert Kwouk configuration. Those of a more intellectual bent could switch to BBC2 which was showing Carry On at Your Convenience and the music charts featured artists like Tinchy Strider featuring N-Dubz, Calvin Harris, Lady Gaga and Pink while anyone with more traditional tastes could settle back with Radio 2 where Alan Titchmarch brought us light classics and pop tunes in the early evening and David Jacobs sent us to sleep with a selection of film and show tunes.

For the ground hoppers amongst us, our first impressions of the Stadium were that it was a huge improvement on the old one (not a difficult task) but that it lacked the “Wow” effect of Cardiff’s Millennium Stadium and Arsenal’s Ashburton Grove. It was agreed that it had to be seen with a full house inside it.

That came five years later, so watch this space.

Whitley Bay v Glossop video posted on YouTube by Manchester Evening News 2009. Wembley Arch image © Whitley Bay FC, whose permission to use the image we gratefully acknowledge. If there is any copyright claim not answered by “fair use” on the video clip or any of the other images used in this report please let us know and we will remove or acknowledge as requested.

Next Post
Jack Ross ‘should let Dylan McGeouch show what he’s made of at Wembley’. Discuss