And so, this epic(?) series comes to an end with memories of a splendid if ultimately disappointing day beneath the Wembley Arch 61 months ago.

Since then, we have flirted with relegation, stayed up due to managers showing that they could organise teams in the short run but not long term and then appointing men who would be stand out flops in Theresa May’s Government of Nincompoops. David Moyes as the new Chris Grayling? Simon Grayson – as lightweight as a manager as Matthew Hancock is as Health Secretary? Chris Coleman a direct replacement for Gavin Williamson (He’s the half-witted Defence Secretary for those who haven’t a clue who he is. I had to Google him. He used to sell fireplaces).

he older pros were unhappy with Di Canio’s managerial style, which appeared to be based on that of his hero Benito Mussolini as espoused in his book

(available from no good bookseller) and he lasted a handful of games before he was relieved of his duties. 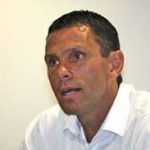 Enter Gus Poyet, who had done well at Brighton but who had left under a cloud, and he was tasked with getting us out of trouble. A crushing 4-0 defeat at Swansea in his first game was not the best start and that was followed by a home derby game against Newcastle.

It was as good a game to win in your first home appearance as manager as any. Fletcher’s header set the ball rolling and, despite a soft equaliser by Debuchy, the game will long be remembered for a wonderful strike by the hitherto disappointing Fabio Borini.

On for Adam Johnson, he picked up a flick on by Altidore and crashed a shot past Krul to seal his name in Wearside mythology and kick start our season. We were up and running and off the bottom and we looked forward to an improvement.

We got one but it wasn’t spectacular. Games were won and drawn. We had a good Christmas with a win at Everton and a late, late draw at Cardiff followed by a dismal home defeat to Villa. Wins at Craven Cottage and The Sports Direct were good but we hit a bad spell and only pulled round at the end of the season to win four in a row and finish in, what was for us, the nose bleed territory of 14th.

And all the time, we were chugging along in the Football League Cup, dispatching MK Dons, Peterborough United, Southampton, Chelsea and Manchester United, the latter in an abysmal but dramatic penalty shoot-out at Old Trafford.

The Red and White Army gathered itself together to roar the boys home against a team who were heading for their second title in three seasons. They had Sergio Aguero, we had Jozy Altidore. They had David Silva, we had Jack Colback. They had Vincent Kompany, we had a creaking Wes Brown.

I travelled down with Pete Horan on the Durham Branch coach which left at some ungodly hour. The journey was uneventful as most people dozed their way through the North, the East Midlands and the counties that were not quite posh enough to be the Home Counties.

The coach parked up and Pete went off to meet his daughters while I rode the tube up to Stanmore to meet Monsieur Salut and some of our contributors.

When we returned to Wembley it was boisterous. We had read about the occupation of Covent Garden the previous night and heard that the (then) much admired owner, Ellis Short had been seen drinking with the fans. We rejoiced in the apparent fact that, unlike our Friends From Tyneside, our owner or, as he liked to term himself, “custodianship ” could walk freely amongst the support. Mike Ashley could only do that with the Discontented of Tyneside if he had the SAS, a tank regiment and a thermo-nuclear device.

It was a fine day. I had a decent seat. The teams lined up thus;

We all know how the game went.

I firmly believe that had we gone in two goals up we would have won the game. As it was, Toure equalised with a spectacular volley and then Nasri put them ahead a minute later and we never got back into it. Fletcher spurned a good opportunity and Jesus wrapped it up at the end.

We had done well. Unfancied by the pundits and most others, we had put up a good show. I wrote about the relationship between the support and the club being mended and that in Poyet we had a manager who could take us to the (relative) heights of 7th or 8th.

Alas it was not to be. Poyet, whose speaking patterns always reminded me of the Mountain Lion in “Creature Comforts” turned out to be no better than the previous managers and was soon shipped out. As City went on to greater glory, we sank to the bottom and continued to sink until we find ourselves in The EFL Trophy Final.

I am looking forward to Sunday because it will be an occasion. Both clubs are well supported and both have had good seasons. Hopefully, ours will end on a higher note than Pompey’s.

The overpriced beer at Wembley was a fiver, a programme £7. That might buy you a pint at Wembley on Sunday. Best to do without. David Cameron was Prime Minister of a coalition government and we were still in Europe. Sam Smith (the singer, not the idiosyncratic brewers from Tadcaster) was top of the charts with Money On My Mind.

BBC 1 has hardly changed; Flog It, Pointless, Bargain Hunt and Escape To The Country, all appeared along with Call The Midwife where the cast trudge around the set, knee deep in saccharin. Ladies swooned over The Musketeers while the Final highlights came after Match of the Day at about 11.30 – just as the coach pulled out of the dismal Wembley Coach Park and on to the nose to tail North Circular Road.

I’m not looking forward to that on Sunday.

Road to Wembley video published on Youtube by EFL, Feb 2014. Fabio Borini goal published on Yutube by Marco Geremia, Mar 2014. If there is any copyright claim, not answered by “fair comment” on the video clips or images used in this report please let us know and we will remove or acknowledge as required

3 thoughts on “A Wembley a Day. When Man City did what Man United couldn’t”

Next Post
A Wembley a Day. Not Sunderland, not once-mighty Leeds, but no less northern for all that