Scots have been linked with Sunderland from the days of James Gillespie, our most capped international, who was plying his trade down here at the opening of the Forth Bridge. In the century that followed they became feared as a footballing nation, and long after mighty Celtic had stormed fortress Europe, they were still able to wreak havoc. And it wasn’t just their magical players that did the wreaking.

Pete Sixsmith knows this, having lived to tell the tale…

My next visit to the Twin Towers and (alleged) Home of Football was on June 4 1977, 49 months after the Most Glorious Day In The History Of Football In England. It was also my first ever international game and it turned out to be an unforgettable day.

In the distant past, the four home countries played in an annual tournament called The Home Internationals. The tournament was struggling and the powers that be had changed it to a competition played over a couple of weeks at the end of the season. In 1977, England and Scotland were in a position where they could win the wretched thing. Scotland needed to avoid defeat while England were required a win by two goals or more in order to pip the Scots. Scotland were on their way to the 1978 World Cup in Argentina.

By 1977 I was settling in to the recently formed Ferryhill Comprehensive School, teaching history and making life-long friends among my new colleagues. One of them, Howard Beverley a fellow Sunderland fan and all-round good egg, had got hold of a couple of tickets from Sunderland fan and Daily Mirror journalist Dave Bowman and offered one to me. As we say now, it was a no-brainer and I took it.

It was half term so I drove down on the Friday and stayed at a friend’s house in Sutton and took the train up to London on the Saturday morning. There were stories on the news of heavy drinking around Trafalgar Square by Scotland supporters who appeared to have obtained thousands of tickets and who descended on the national capital every two years.

For many Scots, this was a rite of passage. They would save up for two years, obtain a ticket from somewhere and then travel south by bus or train consuming industrial amounts of alcohol on the journey. 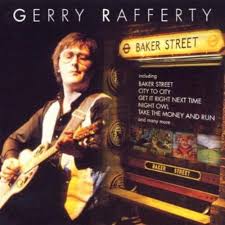 By Saturday, London appeared to have been occupied by a Tartan Army. The tube to Wembley was rammed and the carriage I was in was like a wee piece of Glasgow. As the tube stopped at Baker Street, most of the occupants gave an impromptu rendition of the sax solo from Gerry Rafferty’s recent hit of the same name.

I met Howard somewhere near the ground and we stood and watched the Tartan Army as they ran over the top of a Bentley parked outside a hotel. I have never seen as many broken bottles and squashed cans and as many utterly wrecked people. 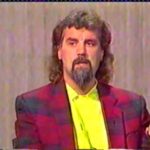 When they saw Billy Connolly at the top of the steps, they went wild. The “Big Yin” was at the height of his early popularity after his appearances on the Michael Parkinson show and he was very much one of the crowd – hard drinking, loose tongued but with a warmth that many of those in the Tartan Deluge had. He was worshipped as he stepped into the hospitality area- and criticised for going into such a place. Hospitality area- pah!!! 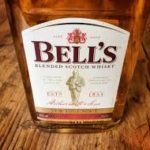 The concourses at Wembley were ankle deep in beer and the toilets were knee deep in pish. The years may lend to exaggeration but not by much. We were on the bench seats at the front, not that anyone took much notice of that and were impressed/worried about the amount of alcohol that our seat neighbours had managed to smuggle in. In broad West of Scotland accents they enquired where we were from and when we said Durham, they decided that that was almost Scotland and shared the Bells and Whyte and Mackays with us. My request for a nice Speyside Malt with a wee drop of water fell on stony ground. Bells it was. 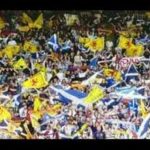 The National Anthem was roundly booed by what appeared to be the 70,000 Scots who had gained access to the stadium. Tales were being told of walls that were scaled, tickets that were bought/snatched from touts and of threats being made to turnstile operators.

Memory suggests that Scotland were the more fluent side. They had a world class player in Kenny Dalgleish and several others who were very good. Asa Hartford and Willie Johnston had excellent games that day and Danny McGrain marshalled the defence superbly. 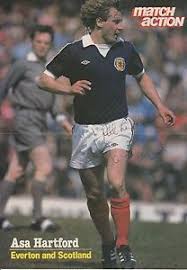 England had the usual collection of namby-pambies playing for them. Not one Sunderland layer featured in that line up – surely Colin Waldron for Emlyn Hughes would have been an improvement and Shaun Elliott’s energy in midfield would have been better than the pointless charging around that typified Brian Greenhoff’s career.

Gordon McQueen opened the scoring just before half time with a fine header from a Hartford cross prompting a huge roar and the clinking of glass as bottles appeared from hiding places. When Kenny Dalgleish scored the second on the hour after fine work by Willie Johnston and the aforementioned Hartford (named Asa because his dad liked Al Jolson and Asa was his real name), the place went bananas.

Mick Channon, who will feature in the next episode, pulled one back from the penalty spot to a cacophony of boos but it was the events after the final whistle that this game is remembered for.

Howard and I made our excuses and left and managed to catch a train that was full of England supporters looking glum faced and a wee bit frightened. I made it back to Sutton without any problems although my hosts, Dick and Julie Smith, were worried for my safety having viewed the scenes on their TV receivers,

It was a memorable day. I was at the next England v Scotland game in 1979 which took place amid a security blanket the likes of which I had never seen before and which managed to cut down on the raucous scenes we had witnessed two years later. I remember Kevin Keegan, at that time a bit of a hero amongst Sunderland fans for his part in the humiliation of Newcastle United in 1974, scored a fine goal as England coasted to a 3-1 win.

The Home Internationals faded away and the bi-annual Scots Invasion of London came to an end. Whatever I saw at Wembley or at any football ground after that paled into comparison with the events of the 4th June 1977. Boca Juniors and River Plate are mere striplings compared with The Tartan Army…….

Video posted on Youtube by Adrian Houghton, Nov 2011. If there is any copyright claim, not answered by “fair use” on the video or images used in this report please let us know and we will remove or acknowledge as requested

2 thoughts on “A Wembley a Day. When the Scots <em>Wha Haed</em> on the crossbar”

Next Post
Do they mean us? A Wall Street look at Sunderland