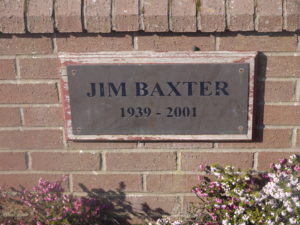 Dave Parnaby is a Kelloe lad who started following Sunderland in the 1960s. He was a very good player himself, turning out with distinction for Gateshead, Barrow and er, Shildon Sunderland Supporters, among others.

He was Head of PE at Spennymoor Comprehensive School where his coaching abilities led to him being appointed manager of the England Schools FA Under 15 team, the top job in that organisation. His success came to the notice of Middlesbrough FC and he was persuaded to leave teaching and become their Academy Director.

The rest, as they say, is history as he supervised the progress of players like Stewart Downing, Ben Gibson and our own Lee Cattermole and Charlie Wyke. He remains a Sunderland supporter – once bitten by this club, it’s impossible to get rid of that love for it. 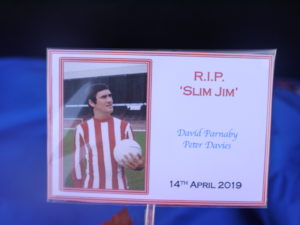 The game of football has given me so much reward and enjoyment throughout my life so I thought it was about time I paid respect to the person who helped me fall in love with the game.

My football hero was ‘Jim Baxter’. 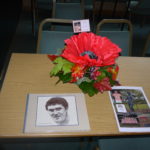 As a youngster I was a fanatical Sunderland fan and in 1965 I was absolutely blown away when I heard The Great Jim Baxter was going to sign for Sunderland. Throughout his time at the club he could do no wrong in my eyes. It was Baxter who ignited my ‘love of the game’.

So on Sunday 14th April 2019 my good friend Peter Davies and myself set off on a pilgrimage to visit ‘The Hill of Beath’, Baxter’s birthplace. On the anniversary of his death we would lay a wreath at the foot of his life-size statue situated just outside ‘The Legion Club’ in the village.

We had a wonderful day. 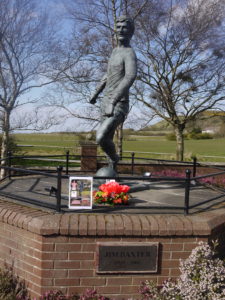 The statue was magnificent – ‘Slim Jim’ in an elegant pose with the ball attached to that wand of a left foot, head up looking in complete control of the situation as always!

We had the privilege of being invited into the lounge of The Legion where we sat and listened to Rab and Moira Aitken, residents of the village, tell us stories about ‘Slim Jim’ and his family history. Moira was actually a cousin of his mother. Rab laid the bricks on the monument. They were so proud of ‘Baxter’. 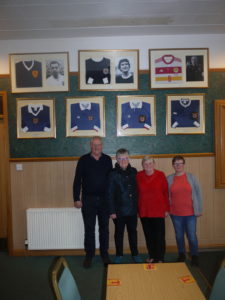 The walls of the lounge were decorated with framed shirts of players from the home club of Hawthorn and three famous, professional players who were born and bred in the village i.e. Willie Cunningham (record number of appearances for Preston North End), Scott Brown of Celtic and of course ‘Jim Baxter’.

They informed us the statue cost £85.000 and how everyone in the village played their part in fund raising events to cover the costs.

The whole day at ‘The Hill of Beath’ was very special.

England v Scotland extract posted on Youtube by TT99 Football, Dec 2015. If there is any copyright claim on the video, not answered by”fair comment” please let us now and we will remove or acknowldge as requested. Photos ©Dave Parnaby.

Next Post
The First Time Ever I Saw Your Ground: Peterborough United, London Road and the ABAX stadium