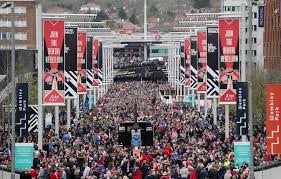 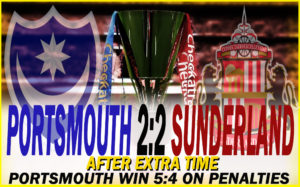 Unfortunately, we were not able to bring The EFL Trophy back to Wearside and it will now remain in the Fratton Park boardroom until next year. Hopefully, they will be in a prime position to defend it in 2019-20 while we will have done our penance and will be back in the Championship.

The game was a good one. Members of my walking group who had seen it on TV commented on what an exciting game it had been and how they had thrilled to the dramatic ending and the subsequent penalty shoot out. I smiled and said that I had had a good day which I had thoroughly enjoyed but that I wished it had been a scrappy 1-0 win.

We played well in the opening 45 minutes. At times we played very well and Portsmouth were struggling. Grant Leadbitter and Lee Cattermole took control of the midfield and with Aiden McGeady and Lewis Morgan having by far the better of the Pompey full backs, goals(s) looked inevitable.

The opener could have come early on, when a fine cross from Morgan was just too far in front of Will Grigg. Not long after, Morgan forced a good save from McGillivray as we dominated the possession and the game.

But we needed that goal and had to wait for a piece of McGeady magic in order to go one up. Once again, he was fouled as he and Morgan had been on a regular basis, but this time it was within striking distance.

Up he stepped and he got the ball over the wall and into the net, via a deflection off the Portsmouth centre half. Things looked good. All we needed was that elusive second goal and that would be that.

But it didn’t come. We went off looking pleased at half time.

Kenny Jackett went off with a face like thunder, suggesting that words would be had in the dressing room. And so they were. They came out and looked like a team who were above us in the league. For 15 minutes they buzzed around and we could not get into the game at all. Leadbitter and Cattermole were pushed back and the crisp, sharp passing of the first half became a hoof up the field for Grigg to chase.

Grigg has not made a great start to his Sunderland career and here, he offered very little. He needs another player to play with – Maguire would be perfect – but as a lone striker, he has not convinced.

The impetus had been handed to them and they took it. Oli Hawkins made the difference. The big centre forward held the ball up well and caused problems for a hesitant Jack Baldwin. He was aided and abetted by Brett Pittman, who never stopped running, and by Nathan Thompson who stopped our full backs from getting forward.

Legs went as we held on. Morgan was replaced by Gooch, Grigg went off and Power came on. This left us with no out and out forward on the pitch and this is where we lost it. Portsmouth came forward and eventually pierced our defence. A long cross from the right allowed Thompson to rise above Reece James and head in.

They had the upper hand now.

There was little offered by our flagging midfield and absolutely nothing from our non-existent forward line. The introduction of Gooch did little and, with hindsight, Wyke may well have been a better bet.

This is not the first time that we have failed to close a game down. Sometimes, we defend a little too early and dropping points at Coventry, Scunthorpe and Luton to late equalisers could well prove costly for us. Sometimes, attack can be the best form of defence. As Portsmouth became more desperate, they may have left gaps at the back. Unfortunately, they didn’t.

Extra time arrived as did Charlie Wyke, the fourth sub (Denver Hume having replaced a struggling Reece James in normal time) for an exhausted Grant Leadbitter. But there was still no real foothold in the game as we defended grimly. The ball was hoofed away and came back at us far too frequently. Portsmouth had played all the football since the resumption of the second half and it looked like their persistence had paid off when Baldwin made a mess of a long ball and Jamal Lowe’s well executed lob nestled in the back of the net.

We stirred ourselves. Hume attacked down the left and his cross was missed and then with a minute to go, Wyke’s chest down set up McGeady and we were level.

Time for the dreaded penalties. We had already won one shoot out this year, but that was a relatively low key affair against Stoke City Under 23s. Memories went back to THAT day in 1998 and images of Lionel Perez not even trying and Micky Gray’s ultimate miss came flashing back. As it was, Jon McLaughlin was far better than Perez but it was Lee Cattermole who became the new Michael Gray. His penalty could have been hit harder but it was a fine save by McGillivray and it put us on the back foot. When Hawkins rattled home the final one. They had won and we had lost.

There were positives to take from this. The performance in the first half was as good as anything we have produced this season. We controlled midfield, the defenders were never really troubled and the two wingers were outstanding. On the negative side, we failed to wrest control back in the second half and were never really in it until the closing minutes of extra time. A more pro-active approach might have paid dividends.

The substitutions did little to improve us. Would McGeouch have offered more than Power who has been disappointing for a while? Would Wyke for Grigg have been swapping one out of form striker for another or might Wyke have seized the game? We shall never know.

The whole day was a good one. We set off at 5.30am, arrived at Wembley at 11am and I met Monsieur Salut at 11.30. We had very good seats, just to the left of the halfway line and just in front of the excellent George Forster, the ultimate hero of what is the SAFC Supporters’ Association – 92 years old and still going strong.

I sat next to a mum and son combination. The son turned out to be the former Leeds United, Port Vale and Northampton Town centre forward Leon Constantine, who now worked for an agency that looked after Chris Maguire and Charlie Wyke’s interests. He was treating his delightful mum to a Mothers’ Day treat. They were a pleasure to sit with though they may not feel the same.

The journey home started reasonably well. The coach park was easier to get out of than in the past and we were on the M1 in plenty of time. Then it went wrong when a major road traffic incident, somewhere near Nottingham, resulted in us covering eight miles in two hours, meaning that I turned the key in the lock at 0045am. I was a tired man.

It was a weekend that many will remember for good reasons. The love that supporters have for the two clubs far outweighs that of the Premier League and their myriad of fans scattered far and wide. The crowd of 85,021 was the second biggest in Europe, it was 4,000 more than the 0-0 borefest between Chelsea and Manchester City in the EFL Cup and as for the 29,164 who pitched up for a Spurs game recently……

We now have to win the next three games. It’s as simple as that. Nine points would take us above Barnsley and looking to cement that second promotion place. But please, let’s be more active and less passive. Let’s go all-out to finish a team off.

The next two opponents are in a relegation scrap. Burton are nicely becalmed in mid table. We can do it. But let’s not sit back at 1-0.