Not much more than a year ago, Mike Dennison wrote about an utterly fascinating book by the exiled Sunderland supporter and wit Ian Mole on life on Wearside in the 1960s. Treat yourselves and read it, as a companion to what follows, at https://safc.blog/2018/02/the-heart-of-old-sunderland-remembered/.

Yes, there is a follow-up. Ian gets to produce another book barely a year on while Monsieur Salut labours on getting a first one finished. The title’s a gem but Mike – unwell recently so, we hope, fully recovered – signals an explanation rather than providing one, though it’s not hard to guess if you know anything about pop song lyrics. A Love Supreme offers it at this link and Mike suggests eBay for those who use it but I cannot find it on Amazon …

Many Salut Sunderland readers will be familiar with A Love Supreme‘s website and Ian Mole’s Lines From London match reports.

Ian has a prodigious memory and has put together a collection of stories that you can dip in and out
of to get a feel of what life was like in the period.

There is a fair amount of football-related content including memories of the 1966 World Cup games at Roker. You can find out about a diverse range of topics including trainspotting, first attempts at dating, going to the cinema, school dances and DJ-ing.

There are also quite a few music-related items and it’s easy to forget what a lively music scene there
was in the town, when Sunderland could attract massive bands like The Who and Free in those pre-stadium rock days.

I must disclose a personal bias here, having known Ian nearly all my life; I was in the same class all
through Chester Road Juniors. We also went to the Bede together, albeit in parallel classes.

Ian sent a copy of the book to cheer me up when I was ill a little while ago and it did indeed cheer me up. However upon re-reading it, I am struck by the profound changes that it documents. Ian has a knack of remembering the tiny details that bring the stories to life especially for those who lived through the period.

We were in the last generation in Sunderland to take the 11+ exams, success in which meant a place at The Bede (The Bede Grammer School for Boys/Girls) rather than staying on at Chester Road Secondary Modern.

For those of you brought up in within the comprehensive school system, it’s hard to visualise just what a profound difference that exam had; passing opened up huge opportunities that were closed off for those deemed to have failed.

This often lead to resentment with friends and family. Ian and I were in Thornhill scouts and one of the reasons I left was the resentment and my treatment by older boys who hadn’t passed the exam. I confess that initially I had had no real understanding of this and whilst I was pleased to pass, I was also a bit p***ed-off. There was no uniform requirement for the Secondary Modern and my mother had
promised me my first pair of jeans – indeed my first pair of long trousers – if I stayed on a Chester
Road.

I enjoyed all of Ian’s stories, but a couple really stick out for me.

The chapter on teenage parties, which reminds me of the usually fruitless searches for parties after a night spent in the Rosedene or the Barnes pubs.

The story that I found most insightful was “Oxford Interviews”. Ian applied to do Classics at Oxford and had to attend interviews there over the course of several days – he was the only working class candidate; one fellow applicant asked Ian where he was from and when he replied Sunderland, the response was “Oh, I didn’t know they taught Classics up there!”.

Nowadays it is hard to imagine the overt snobbery and cultural bias against working class people from the North East. I remember only too well having to learn to “modulate” my accent at my first job in London in 1975.

I would recommend this and Ian’s other book to anyone wanting to get a flavour of what life was like
in Sunderland in those days half a lifetime and a whole world away from today.

Both books are available from A Love Supreme and at eBay.

Ian also regularly appears at the Sunderland Minster Craft and Vintage fair, where he is happy to chat about the book or just say hello.

What about the rather odd title – Michelle My Umbrella. You need to check out the “Misheard
Lyrics” story for that one. 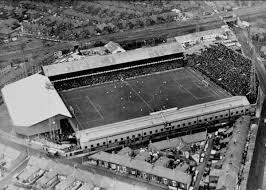 4 thoughts on “Michelle My Umbrella: Ian Mole and memories from the heart of Sunderland”

Next Post
Portsmouth vs Sunderland: crunch time at Fratton Park with Charlton looking set for the final