Posts are coming thick and fast at the moment. Malcolm Dawson kicked off the season reviews less than 24 hours ago, then Pete Sixsmith sent in his pre-Wembley thoughts and Jake provided light relief with an excellent musical interlude. Now Lars Knudsen picks up where they left off:

However we assess this League One season that is now reaching its climax, it has been “memorable”. Life as a Sunderland Supporter is never dull, and if one thinks about where we were at the start of this season, around £150 M in debt, with an absentee owner and a large proportion of players who just did not want to engage with or really show up for our club, it’s quite amazing in many ways that we have got this high in the league. It could have been easy to see this season as one of “consolidation” with a mid-table finish.

Doom-mongers will rightly say that this is the lowest league position ever since the club’s founding in 1879, and that is correct. They will point to the fact that Denis Smith took us straight up as champions in 1987-88 – the first and last time we were in the third tier. That season we gained 93 points, with 27 wins, and this is the key – just 12 draws. Our 85-point total this year resulted from a slump in the last 4 games, which included the losses to Fleetwood Town and Southend. One win in the last 7 games was just not acceptable, given our resilience for most of the season.

That we finished 6 points off automatic promotion, with Luton and Barnsley showing greater momentum than the Black Cats in getting over the line, in a way we often promised to do but never actually did, has been hard for many supporters to accept. We did have automatic promotion in our own hands.

I generally dislike people using that currently ubiquitous phrase “it is what it is” but “we are where we are”, and the table never lies after 46 games: 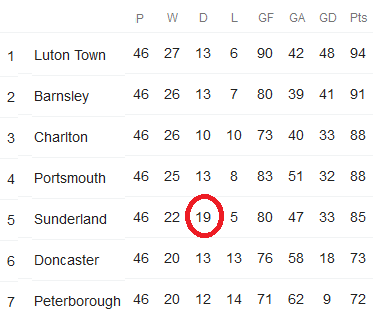 I have often written on these pages about the psychology of winning and losing – those fine lines between victory and defeat and the fact that one just needs one or two players who are doing it out there on the pitch, who drive others on and make a real difference to the collective outcome. I accept that there is a sharp contrast between, for example, playing at home against Portsmouth in front of over 41,000 fans and showing up at Fleetwood Town the following week with just 4000 hardy souls in attendance, but there has been a surprising lack of intensity on occasions this season.

Looking at our players this season, the strong drivers behind this team in my view have been “goal-machine” Lee Cattermole, netting an amazing 7 times, McGeady, Power at times and latterly Leadbitter, but if I was in charge of the club I would get a sports psychologist to look at what 19 draws in 46 games says about the team’s collective mindset. It is true that we scored in all but one league match, drove home 80 goals and lost fewer games than any other team. This gave us until those last few games a “hard to beat” image, but there were times when I was watching games and we somehow did not kill off teams when dominating, notably in the 1-1 games at the Valley, Wycombe Wanderers and Peterborough.

It is notable that none of the expected drive really came from the defence. Following our dynamic former midfielder on Twitter, Gordon Armstrong has bemoaned the lack of a big, bruising centre half who could organise the defence and be a stronger physical presence than any of Loovens, Ozturk, Dunne, Flanagan and Baldwin.

Back to the present.

Having acquired a ticket for Sunday’s game at Wembley I am very excited to be able to cheer on The Lads in their quest to beat Charlton Athletic. I was at the away fixture at The Valley late in January and although Sunderland secured a 1-1 draw we should have won that game. A cracking volley from Luke O’Nien after 3 minutes opened a dominant first half, but we were pegged back in the second and conceded. We were close to a comeback near the end but missed Josh Maja and his clinical finishing. This has been a real factor in the second part of the season; one cannot easily replace a gifted finisher who scored 15 times before departing in controversial circumstances.

If we play well on Sunday against the Addicks as we did twice this season and combine it with the resolve the team exhibited in the 2 legs against Portsmouth, it will be an enjoyable day. The fact that we have been to Wembley once already this season should help to calm the nerves of the players. This is arguably one of Sunderland’s most important games ever as we aim to recover from our all – time lowest league finish since the club’s founding in 1879.

A loss would mean that the promise shown this season will be wasted. Who really “at heart” wants another season in League One? There is a danger of a multi-season stay at this level and that would be very tough on the team and its fans, as well as finances.

We need the investment that our owner says promotion to the Championship would bring. So I will be looking for a better result than the last time I saw the Black Cats at Wembley, a rather miserable 0-1 defeat in the 1984/5 Milk Cup final featuring a penalty miss.

It’s been a long season, but a final push, a huge team effort and Aidan McGeady back upfront should drive us over the line to promotion

4 thoughts on “The Lars Word: it’s been a long season but life as a Sunderland supporter is never dull”

Next Post
A song for Sunderland at Wembley. Jackson C Frank’s tune, our Jake’s words