Who, like me, looked on in admiration at Janine Beckie’s corners for Canada against New Zealand and thought, “let’s hope George Honeyman is watching ,too”, asks Monsieur Salut?

The Women’s World Cup, or at least what I have seen of it on French TV, has provided great sporting entertainment: excellent technique, movement and commitment without the absurd play-acting that pollutes the men’s game.

There are negatives. Even among the best teams – I am thinking of France, the USA, England and Canada but haven’t seen anything of other favoured sides including Germany or Italy – impressive moves break down with a poor final pass or feeble attempt own goal (so not unlike lots of SAFC games we see).

But my overall feeling is that quality of women’s football has grown significantly; even keepers, a traditional Achilles heel of the female game, are gradually gaining in confidence and ability.

Just look at the clip above, showing Christiane Endler of PSG and Chile making a string of outstanding saves against the USA.

Someone called her stop from Christen Press’s sensational volley one of the most magical moments of the tournament so far. And it was good to see Whitby lass and ex-SAFC star Beth Mead put in a decent shift for England against Argentina.

Still it’s not enough for some. My old confrere Terry Pattinson posted at Facebook: “I cannot understand why women’s football gets so much coverage……nobody talks about it because the standard is so poor. USA 13 Thailand 0 was an example.”

I pointed out that this scoreline merely reflected the supremacy of the reigning champs, arguably the best this time around as well, and the fact they were up against lightweights. As a Newcastle fan, he should know that high scorelines are not restricted to the women’s game; didn’t Sunderland go to St James’ Park and win 9-1 in what was, for heaven’s sake, a Newcastle title-winning season in the top flight? Terry may even be old enough to have been there even if it was in the first decade of the last century.

Most of Terry’s Facebook pals who responded also shot him down in flames. And he was decent enough to admit that England’s Ellen White – like Janine Beckie a member of the Man City ladies’ team – took her two goals well against Japan. He still scoffed at Japan’s shortcomings in front of goal.

Salut! Sunderland has always been supportive of the SAFC women’s side. And of course, there is an interest to declare in that my younger daughter Nathalie is a smashing player.

But it would be interesting to hear what others have made of the games they’ve seen, players who’ve impressed and an answer to the question posed in the headline … and I naturally expect dissenting views. 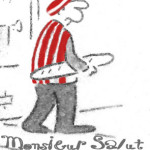