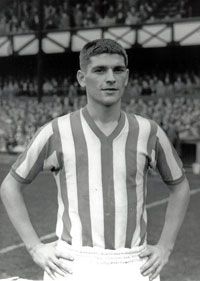 Right, now I’m off down the park with my casey for a kick about – must remember a jumper despite the warmth!

And the best goal I ever scored was through a goal with jumpers as posts. It was a deliberate own goal (I imagined myself as a sort of Johnny Crossan, but even more rebellious)

The best goal I never scored was in a recreation area at Peterlee Tech. The ball was played into me as I made a diagonal run into the “box”. With the keeper obviously expecting me to control it, then turn and shoot into the bottom corner I just ran over it without breaking stride and watched it go in the opposite corner. Pity there were no mobile phones to record it for posterity back in the 70s. It would be viral on You Tube these days.

And that lot got me thinking about one particular goal I scored. 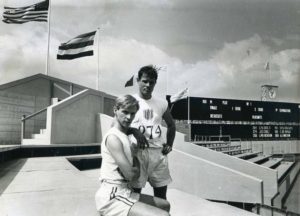 My goal was scored in much more salubrious surroundings – one of the pitches at Bebington Oval, which a few years later subbed for Paris’s Stade Colombes in the film Chariots of Fire. It wasn’t the one they ran round, it was one of the ones round the back, if I remember correctly, but close enough.

And although my goal, like Malcolm’s, never went viral one like it did, for it was as near to the Spurs cup final winner against Man City in 1981 as any goal will ever be. That one was voted Wembley goal of the century in 2001 but I reckon mine was better and would have got hundreds of thousands of views rather than the meagre 53,000 that Ricky Villa has had since 2012.

My goal was also scored in a cup game, though not in a final, it was more more probably a first round draw:

There were only a couple of minutes left when we won a corner. I was playing left back and pushed up from the half way line as the ball was swung into the box. It was cleared and I ran on to it, chesting it past one of their players and then knocking it beyond one of their outrushing midfielders as I took it near to the edge of the box. A couple of shimmies, a change of feet, a feint that paralysed the keeper and even the opposition team applauded as the ball nestled in the back of the net.

Unlike Mr R Villa my goal wasn’t a match winner – we were 9-0 down by the time I scored (which perhaps explains why our opponents didn’t feel too inclined to try to stop me) – but what a goal.

It was the only goal I scored for that team, whose name I cannot now remember, and I never played for them again. The organisation was shambolic and it didn’t even finish the season. I ended up playing for another club, in another division, on the other side of the Mersey, and possibly under a different name, where my tenure was almost as  short and even more ignominious, as properly befits my footballing skills.

In fact, apart from that university inter-mural game, it was the only goal I ever scored in a properly organised fixture. But score it I did, and the memory of that day, that glorious goal, it lives on.  Not as important as Ricky Villa’s, not as good as Ian Porterfield’s. But I scored it, in a proper game with proper goalposts and proper nets, and that’s what counts.

Over to you. You must have memories to share. They could include jumpers, like M Salut, a never goal, like Malcolm, or a famous ground with proper nets, like me.  We’re waiting to hear from you

The Bebington Oval picture was found at https://www.liverpoolecho.co.uk/news/liverpool-news/1m-upgrade-wirrals-oval-leisure-11003280

The Ricky Villa goal was posted on Youtube by Tottenham Hotspurarchive , 2012

Johnny Crossan – with thanks again to www.therokerend.com

Chariots of fire excerpt posted on Youtube by HudsonFilmLtd, 2012

If there is any copyright claim, not answered by ‘fair use’ exemptions, on the video and image used to illustrate this report, please make us aware and we will add credits or remove as requested.

Next Post
From Morecambe to Blackpool, Blackburn, Bolton and Bury, then Liverpool, Everton and Tranmere. It’s an Historic Lancashire Ramble