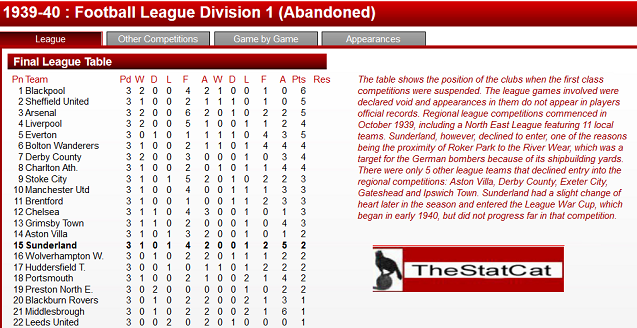 John McCormick writes: Wikipedia had an interesting page on the 1939-40 season but I can’t find it any more, and I do have to ask why do we need it when we have the statcat.

But I digress. A few months ago I came across  a copy of the Daily Express from 1939, 4th September to be precise. It contained a report of a football match between Arsenal and Sunderland. We lost 5-2, with Ted Drake scoring four of those goals. Here’s how the statcat shows the game:

I doubt if many people took much notice of the newspaper article.  The day before the game Germany had invaded Poland. The day after the game, Sunday 3rd September, Mr Chamberlain had broadcast to the nation announcing that we were at war with Germany. The evacuation of children had begun, air raid sirens had sounded and the Emergency Powers (Defence) Act 1939, passed in August, was being put into action.

Under this act, which included provision for a ban on the gathering of large crowds, the Football League was suspended. You can hear the announcement, which focused on cinemas – how many held 50,000 people? – and exempted churches, by clicking the play icon on the bar below:

Though wartime Leagues were soon established and there was a wartime cup these were often affected by the availability of players, who had signed up in large numbers, and the Football League proper did not resume until 1946. 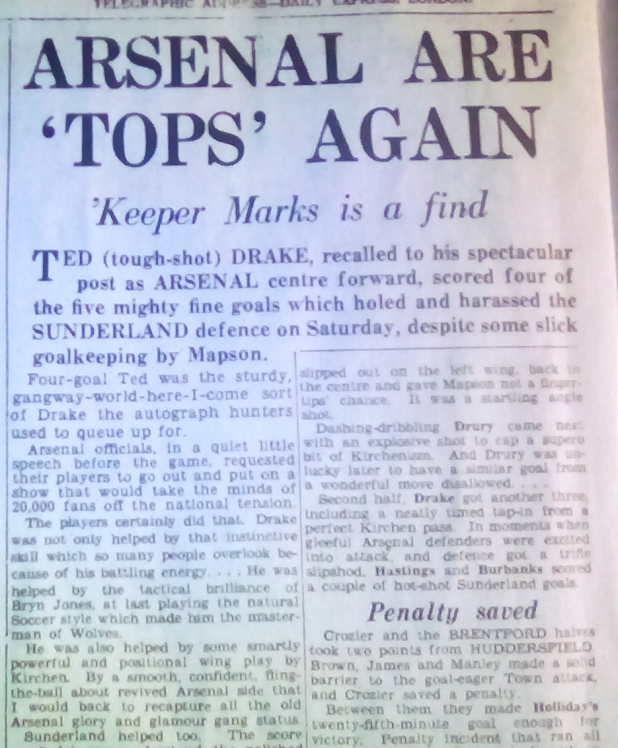 Games in the wartime league and cup were not included in official statistics; they often included guest players – professionals who had signed up and were based nearby, and there were incidences of games being scheduled but not played.  Sunderland didn’t enter the initial War League because the ground was close to the shipyards and crowds there were thought to be at risk but they did enter from 1941. They were runners up to Wolves in the League War Cup in 1942 and finished third in the War League in 1945.

As if it mattered. Sometimes we need to remember. There are more important things than football

Declaration of War posted on YouTube by Worcesterjonny Jan 2009. If there is any copyright claim on the video or graphics used in this post, not covered by “fair comment” please let us know and we will remove and/or acknowledge as requested. And thanks, as ever, to the Statcat

Next Post
The Chapman Report from Peterborough: alarm bells or just a wake up call?