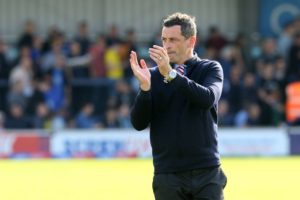 In the 55 years that I have followed Sunderland, we have had 29 full time managers, nine caretakers and a Selection Committee.

Not one of those, ranging from big names like Lawrie McMenemy, Martin O’Neill and David Moyes down to relative unknowns such as Dennis Smith, Ken Knighton and Mick Buxton have done any better than get us to tenth in the top league.

It’s been 55 years wasted on a club that cannot get anything right and in which I have no confidence that they will get right for the rest of my rapidly diminishing lifetime.

The last of the 30 was Jack Ross, who left today. He came as a young manager with a strong reputation in Scotland who we had convinced that Sunderland was a better bet than Ipswich Town. He leaves after a miserable three months of this season, his reputation in tatters, while his former employers once again find themselves in total disarray.

It was, I suppose, inevitable. There were rumblings of discontent from the support after the opening game of the season and a couple of wins did little to assuage that. The defeat at Peterborough made things worse and the last four league games have added fuel to his more vociferous and outspoken critics on the terracing and on the screens.

The performance at Lincoln was appalling and indicated that the team he has put together will struggle against any side that has big strong central defenders and nippy midfield players – which is just about every other team in this league. It put serious doubts into my mind but I thought that there would be no change until the takeover was completed.

That also seems to be in doubt if social media is to be believed. If so, that could be terminal for the club and the support, many of whom will not continue to turn out to watch third level football for the next umpteen seasons as hopes and dreams fade as quickly as the patina that Ross, Stewart Donald and Charlie Methven brought to the club 18 months ago.

I thought that Jack Ross was a decent man who did his best. If it wasn’t good enough for some (many), so be it. Compared to some we have had in the past, he had dignity and courtesy in abundance but that does not create winning teams – and we do not have a winning team.

He will probably return to Scotland where both Edinburgh clubs are rumoured to be looking for replacements. We have to look for another manager and it is to be hoped that discussions have taken place over the last few days with possible replacements.

Mind you, which competent manager would want a job like this? And how much time would they be given? And what’s to stop elements of the support from turning on him within weeks?

It’s another crossroads for the club and for many of the older and more sensible supporters. The route we take from here will define how many of us stay on the journey.

9 thoughts on “Another One Bites The Dust, leaving many Sunderland fans at the crossroads”