First, my usual opening graph, below, showing our points accumulation and position since the start of the season. You can also see when Jack Ross left us and decide whether his replacement has made any difference. 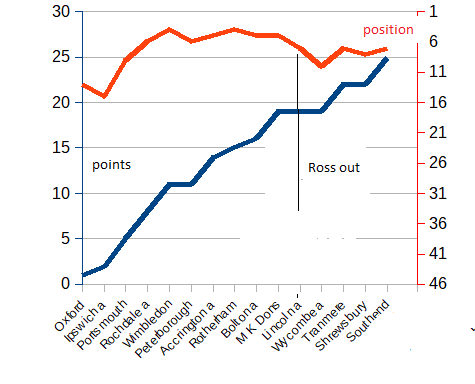 I think it’s a bit too early to tell but I do accept our recent cup losses paint things in a poor light. However, in the league there had already been a couple of  losses under Jack Ross, which made things worse than last year, although the situation was recoverable.

Then Ross got sacked and our new manager didn’t manage that recovery, with losses at Lincoln and Shrewsbury holding us back. We’re now on 25 points from 15 games. That’s well below the 32 points we had at this stage a year ago, and well below the 2 points per game that Jack Ross was maintaining at the time.

In fact, we’ve hardly been close to that yardstick since the season began:

Even so, looking at the graphs and the league positions I don’t think all is lost. When we compare ourselves to the other five clubs on our watch list we’re just about holding our own, apart from Ipswich, that is. Even Peterborough, ahead of us on points, have had a losing streak and could be caught. That said, it’s the same for us. Portsmouth – moribund not so long ago – Rotherham and Doncaster all have us in striking range: 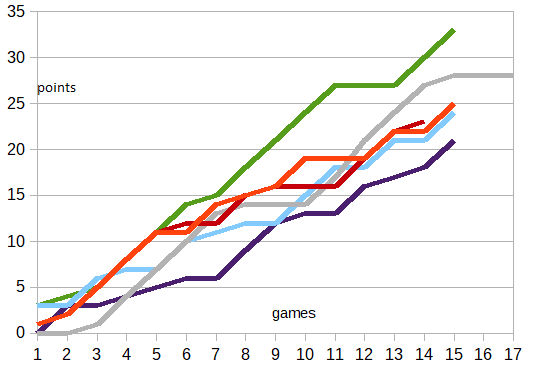 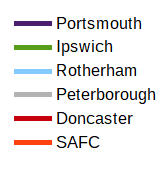 It’s when those points are translated into positions that things get really interesting. We have interlopers, which in itself is not unusual. What is interesting is the number of them and how well they are doing.

Currently three of the top six – Wycombe (11 votes, 0.5%), Oxford (35 votes, 1.6%) and Fleetwood (26 votes, 1.2%) – did not feature in our pre-season poll. Only Coventry made a showing before being edged out of sixth place by Doncaster. Their “progress lines” aren’t included in the graph below but their names have been written in to reflect where they are now: 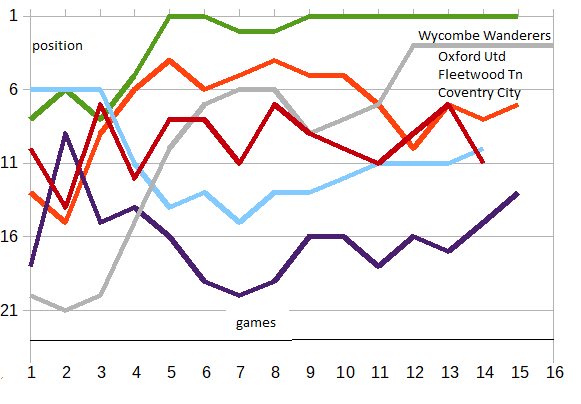 How do we interpret this? With caution, I suggest. Portsmouth and Peterborough are 10 positions but only 7 points apart and Portsmouth have two games in hand. Doncaster have even more points, and even more games in hand over Posh. Sunderland could enter the playoffs – even go up to third – if results go their way. None of the current three-to-six clubs are safe, and nor are Wycombe, currently second but with more games played than any other club in the top half of the table. Only Ipswich look like promotion certainties and even they have lost games recently.

Considering the bottom two graphs together reinforces this feeling. All of the clubs chosen by our poll are gaining points but all have lost some games. This is reflected in the ups and downs of their league positions; none have a smooth upwards trajectory.

When it comes to the others, Coventry are as inconsistent and Fleetwood are alternating wins with losses. Only Oxford – perhaps drawing too often – and Wycombe (only one loss all season) have better recent form. Will they maintain it?

So there we have it. The season’s about a third over. Ipswich and Wycombe deserve their current high standing, everyone else’s position varies from week to week, and a long wet winter is looming.

Will we need to make replacements in our graphs? Your guess is as good as mine.