Meanwhile, I was living in Leicestershire and in our second season at the new ground a group of Midlands based supporters, including Steve McIllwraith, Steve Hay, his sister Karen, Paul Walsh and his sister Julie and the tireless Chris Herriott started the Heart of England Branch of the Supporters’ Association. I joined up the day after seeing their piece in ALS and soon became involved as Information Officer, producing a monthly newsletter which I called “Turnips are Big and Purple”, the reason for which will be apparent to anyone brought up in a Durham pit village who moves south.

Joan and I and our younger brother all had season tickets at the new ground and would meet up regularly before home games. Things were bright back then as we battled to return to the Premier League and not only were we watching the Lads home and away most weeks we took our holidays in Denmark and France for the pre-seasons in those places. 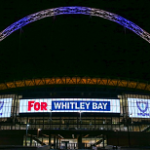 I can’t remember when exactly, Joan decided to reduce her involvement in Salut, but it would be sometime after I moved back to the North East in 2011, and I was volunteered to take on her role as Deputy Editor. I had contributed to the site previously. I remember headlining one of my earliest match reports “The Quality on Mersey Leaves Me Drained” after I had travelled up to a midweek game at Goodison Park, the previous year before I had the good sense to retire. My friendship with Pete Sixsmith was by then well established, and as well as meeting up at Sunderland games we took in the delights of non league games such as Barwell v Whitley Bay and Coalville Town v Kings Lynn, not to mention trips to the FA Vase final at Wembley.

I have met up with Colin and John Mac and several other regular contributors before, at and after matches home and away and have been surprised at the number of times I have got talking to complete strangers at games who, during the course of conversations, have asked me if I was the Malcolm who wrote for Salut. Knowing that my words have been seen and often appreciated has made the hours spent on Sunday mornings and other times worthwhile.

I am unlikely to contribute any more and wish those who are taking over the archive of the site well. I don’t know them nor the direction in which they plan to take the site but I hope they will try to maintain the standard of reporting to which we have all aspired. We have not been frightened to be critical but whenever we have felt that there is a need for changes at the club have striven to make our views known in an adult, reasoned and well argued way, pointing to weaknesses and offering alternatives. There is, in my opinion, too much negativity surrounding the club at present, emanating from a highly vocal core of fans who seem intent on destroying any chance the club has of establishing a stable platform from which to build and progress. They will claim that they want the best for the club, but from twelve months ago when we had a set of owners who were seeking to hand the club back to the fans, who brought in an enthusiastic young manager, who dealt strongly with a group of overpaid players who were clearly not interested in playing on Wearside and who came up with a plan to get the club back onto a financial sound footing, we now find ourselves in another mess.

The efforts of Donald and Methven to interact with the supporters has come back to bite them. It was the negativity and vitriol of fans on social media that made Stewart Donald close down his Twitter account and miss a succession of games. It was most likely the events at one of Charlie Methven’s regular meetings with supporters groups that persuaded him he was better off spending time with those who appreciated him. Compare our News Now feed to those of most other clubs in this division and the difference in the way they are reported is clear to see. It may not be the fans who are out on the pitch or picking the team but they do have a big influence on the atmosphere and the mentality of those who do.

1 thought on “Malcolm Dawson: the final view from the West Stand”