Welcome back, Stuart Jinks*. Jinksy, as some will remember, is a past winner – first prize no less – of what we now call the HAWAYs – Highly Articulate Who Are You? awards. That was back in 2012 and we thought it would be a good idea to invite him to have another bash. Sharp memories will also recall that despite the chummy picture you see below of Jinksy with Martin O’Neill, he had serious misgiving about MON’s managerial abilities. Oh, and the headline gives his Villa prediction; we’ll be a lot lower but stay up, says Jinksy. Now let the man behind the Villa Boy YouTube channel speak for himself …

Salut! Sunderland: Our catastrophic start must have had you licking your lips at the perfect chance to bag another three points and get a thumping goal difference established ..

Jinksy: Firstly I’d like to think you for asking me back it’s been a few years. I can remember getting a bit of stick over my comments about the myth that is Martin O’Neill but I think you’ll all agree that I was right about him his record just didn’t live up to the hype. With regard to our game this Saturday I’m looking forward to it expecting us to win (2-0) and praying Tim Sherwood has learnt from his mistakes in the 1st 3 games. 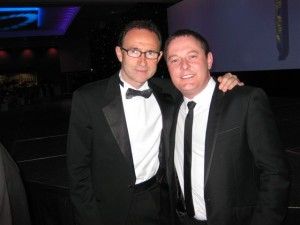 Life after Benteke. He always seemed to promise more than deliver but how big a gap has he left?

Life after Benteke will be difficult because he was one of the best strikers I have seen in a Villa shirt and on his day unplayable. His record of 1 in every 2 games was exceptional especially if you add into the equation he had to play under a negative Manager in Paul Lambert and missed the best part of a season with a major injury. You can’t replace a player like him so you have to use the money to make the team stronger and hopefully that is what Sherwood has done. Saying that as I write this Villa are desperate for another striker and my choice would be Charlie Austin it’s a no brainer.

What about your summer signings? Traore looks potentially a great acquisition

With the sale of Benteke and Delph we generated over £40m and Sherwood has brought in 10 players but lets not forget 16 players have left and our net spend is about £2.5m.

Some fans might be fooled by the money we’ve spent but you can’t actually say Randy Lerner has backed Sherwood. It’s more a case of having to buy players to fill all those holes in our squad and do it by using the money we’ve generated.

Of the signings we’ve made Micah Richards on a free is a master stroke although I’d prefer him to be playing right back. Of the others Jordan Amavi French U21 left back was signed for £10m from Nice has been exceptional. Idrissa Gueye who signed from Lille for £9m has also looked a very strong midfield player and he’s settled in well. As for the others Jordan Veretout (£8m) I’m sure when fully fit will be a great signing a French U21 on the verge of the full National squad, Jordan Aywe (£9m) from Lorient needs to find his feet but it’s very early days and his pedigree is unquestionable. Rudy Gestede a player I followed a lot last season at £6m is a bargain but to get the best out of him we need to play 4-5-1 not the 4-3-3 we played a Palace. This is where Adama Traore comes in a player I don’t know much about but I’ve seen the videos and we all saw what he did in his 25min cameo against Palace, power and pace and very exciting just the player we need to supply the ammo for the best header of a ball in English football. I’m hoping our best signing is yet to come.

And where do you stand on ownership just now. Sorry to see Randy Lerner wanting out or can’t wait to see the back of him?

Anybody with half brain cell knows Randy Lerner set up numerous companies when he purchased Villa using one company to loan the other money so in fact not spending a penny and putting our club in debt to the tune of £120m to him.

People say he put this money in out of his own pocket. Well, yes he did but all loaned, not given and he gets it back with interest and management fees.

So would I love Villa to be sold YES, but only to the right person and I doubt very much that right person exists. If we are sold it will be to another business hoping to make a few quid in my opinion.

Your assessment , if not already covered, of Tim Sherwood? Can he, subject to ownership and resources, re-establish Villa as top six?

I absolutely love the breath of fresh air he has brought to our club, his honesty and his understanding of what an honour it is to manage such a great institution. He’s made mistakes like playing a high line away to Southampton last season which led to us getting hammered 6-1 – [that sounds a narrow defeat to us Ed] – and the mistake was not playing a high line but not changing it when it wasn’t working. This season he’s got tactics wrong in all three games. Against Bournemouth he changed which resulted in a win but in our next two games he made head scratching decisions that resulted in defeats. I hope he can learn from his mistakes. Playing Gabby Agbonlahor is one of them, a player that is akin to a pencil without any lead in it. Taking off players that are actually playing well Sinclair v Man Utd & Sanchez v Palace and giving five-year contracts to players that aren’t good enough at this level (Westwood and Bacuna).

And how does the current squad compare with the best you’ve seen as a Villa fan?

The best squad I’ve seen at Villa won the League Title and European Cup so I can safely say the current squad couldn’t lace the boots of that one.

Did you get to Wembley? How much of an anti-climax was the emphatic defeat?

Did I go to Wembley! Of course I went to Wembley. You don’t sit on your own on a cold Monday night at the Stadium Of light (1998, I think) and not go to Wembley which is one of a trillion examples I could have used. We had our cup final in the semi which was one of those days you watch football for, why you go to the away game on a Monday night. Playing Liverpool off the park was amazing and a few tears were shed that day.

As for the final I was convinced we were going to win I just thought it was our year but was always wary of what an excellent Arsenal team were capable of and in the end it was embarrassing.

Guess the Score in Aston Villa vs SAFC: https://safc.blog/2015/08/aston-villa-vs-sunderland-guess-the-score-guess-the-bigger-club/

I didn’t think that Wembley trip would have won a place among your highs as a Villa fan (and it was maybe a good contender for lows. But how does the balance sheet look when you look back on your own lifetime as a supporters and weigh up the good times and bad?

I’m 46 and in my life the only cup we haven’t won is the FA Cup although we have been to two finals and not turned up in both. The highs of course are the league title in 81, European Cup in 82 and the European Super Cup in 83 beating Barcelona over two legs.

The lows are many but topped by getting relegated in 86-87 but this did lead to a very enjoyable year in the old 2nd Div and promotion on goal average on the last day of the season which was a high. I’d say on the whole we could do with a few more highs to balance it up but nobody can take away the fact we were once Champions of Europe.

Has our wretched form of recent seasons – pretty much constant apart from the O’Neill bounce and the subsequent great escapes – surprised you?

To be honest yes and no. Yes because Sunderland are a massive club with great support which should generate enough cash to buy a decent team. No because it’s not easy to get players to move to the North East, you are owned by an American and you have made strange management choices.

Is there anyone in our squad you’d quite like to see in yours?

Pantilimon we are desperate for a decent goalkeeper.

Maybe the fact summer’s not over, and our rotten start, are making me cynical about football but has a lot of the fun gone out of it generally?

100 per cent for me. Making up the numbers and hoping for a top 10 finish isn’t what Aston Villa FC should be about.

What one step could the authorities or your club take to improve the ordinary supporter’s lot or give the game a lift?

Is there really any point in complaining any more about cheating? Should we accept the coaches have simply added diving, feigning injury and the rest to their training ground routines?

No we shouldn’t accept it. I think there should be a panel of experts that look a incidents of cheating and bans handed out to the guilty. The more you do it the longer the ban.

* Stuart Jinks on himself

I’m a project manager and season ticket holder for 28 years in the Trinity Road stand upper. From Birmingham, living with the Yam Yams in Dudley. I was taken to my 1st game in 1972 by my cousin and godfather Tony but didn’t really get the bug until our League Cup win in 1975. Villa fanatic and runner of the Villa YouTube Channel VillaBoy –
https://www.youtube.com/c/villaboy
https://twitter.com/VillaBoy68
https://www.facebook.com/VillaBoy68

Next Post
Aston Villa vs Sunderland: Guess the Score, Guess the Bigger Club