Eric Roy, as you may have read on these pages, returns to Sunderland – where he played briefly but with such class that one faithful reader, David Miller, commented that he’d walk into today’s side – for tomorrow’s game versus Chelsea.

Take a quick look above at how his run and pass to Niall Quinn opened up the Chelsea of 1999, a team that had humiliated us on the opening day of that season after our return to the Premier League in glory as second-tier champions.

We destroyed them in a scintillating first-half display that put us 4-0 up, the same scoreline as at the final whistle at Stamford Bridge. Quinn scored twice as did Kevin Phillips. SuperKev very nearly completed his hat trick in the second half but we allowed the characteristically self-assured Londoners a consolation goal instead of adding to their embarrassment.

Eric and I have spoken a couple of times in recent days as well as communicating by text messages and emails, and one further conversation is planned that may produce a little interview. He had hoped to stay on for the Watford game, too, but must return to France – where he is a TV football pundit – on Friday.

But can his presence at the Stadium of Light for the tough challenge of nine-wins-in-a-row Chelsea inspire the Lads of today to emulate the achievement of the team of 17 years ago?

Salut! Sunderland has interviewed Eric once before. It is worthy of a repeat appearance so here goes. But remember as you read the interview that it was conducted six years ago 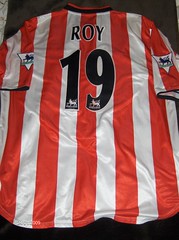 Years after those glorious days of Johnny Crossan, Charlie Hurley, Cloughie and all, there was the team of Peter Reid that stormed to a record-breaking promotion, goals and points, and then finished seventh two years running. Whatever later went wrong, Reid got something right for several seasons and we were treated to the most exciting time to be a Sunderland supporter, 1973 aside, in living memory.

Eric Roy was, for a very short time, part of that excitement. It was perhaps a little late in his career to make a greater impact on the Premier League but his time at the Stadium of Light is remembered with real fondness by many … It was as heartwarming a game as I have attended in half a century of supporting Sunderland.

See also: why Salut! Sunderland had a little spell of supporting Nice

And there are those recognised by discerning fans as oozing class but who, for any reason from persistent injury to managerial misjudgement, play so rarely that they must have something special to remain in people’s minds years after moving on with only 27 games and a solitary goal to show for a season-and-a-half at the club.

Step forward Eric Roy, a midfielder possessing the sort of gifts only a fairly blinkered management team could fail to appreciate. The same Eric Roy who, in the post only a few days ago (ie 2010 – Ed) but nine or 10 years since he last kicked a ball for SAFC, received a request out of the blue from a Sunderland fan asking for his autograph.

(At the time of writing the article – Ed) Eric is back in his home city of Nice, after a career that also included spells at two of France’s top clubs, Lyon and Marseille, as manager of OGCN, better known as the Nice football club that plays in Ligue 1.

The occasionally uncommunicative communications folk at SAFC (things have got better – Ed) might usefully take note that within an hour of Salut! Sunderland firing off a request to Nice for an interview, back came an efficient, businesslike response with Eric’s mobile phone number, a time to call and a request that a link to the resulting article be supplied.

When I flagged up the interview at Salut! Sunderland, some of the banter concerned whether it would take place in the language of Bobby Thompson as opposed to the language of Molière. Well, the Gallic bard won hands down, not that he would necessarily have appreciated the version of his language adopted by Monsieur Salut to pose the questions.

At first, Eric was happy to talk in English. But he quickly decided that it would work better in French, and better still if I let him finish a meeting I was interrupting and call back later.

What transpired, once he was free of both managerial duties and the need to recall his English, was a friendly, revealing chat in which Eric showed himself to be a great lover of English football, warts and all, a healthy critic of the coaching methods we employ and a man with a deep affection for the North East and the club, players and supporters with which and whom he became familiar.

Eric had reached high levels in France when word reached him in 1999 that Sunderland were keen on recruiting him from Marseille.

“Even before I signed my contract, I was playing for the club,” he recalls. “I turned out for the last 20 minutes of Kevin Ball’s testimonial match against Sampdoria. People were asking ‘who are you?’.”

Eric believes that when the fans found out who he was, and what he could do on the field, they warmed to him. “I got the impression the supporters liked me, and would have liked to have seen more of me – and that is exactly how I felt.”

He felt uncomfortable with the idea of stop-start access to the team sheet. English players, he says, seem to adapt better to the idea of playing one week, then being excluded for the next two or three games before playing again. “I found it difficult, and it frustrates me that the fans didn’t properly see the standard of play of which I was capable.”

Naturally, he retains fond and proud memories of the game against Chelsea in which his wonderfu run and low pass set up the first goal, with the game barely a minute old, for Niall Quinn. As every Sunderland fan knows, we had the game wrapped up by half-time, four up with a pair each from Quinn and SuperKev. “We really showed that day what we could do,” said Eric. “But there was another game, against Liverpool, when we also played very well but unfortunately lost to two goals from Michael Owen.”

Surely there was a down side. There was. The ways of Reid and his faithful sidekick Bobby Saxton left him bewildered. “It was a different style of play for me, always ‘straight to the head of Niall’ and ‘win the second ball’. Yes, I agree with that, but not all the time. Niall, for example, was also very good on the ground.”

He also found training sessions and meetings unstructured and disorganised, “not very scientific”.

“For me, this was all a bit difficult,” Eric said. “But then, we had a very good season, finishing sixth (Salut! Sunderland corrected him! -ed) , with Kevin scoring all those goals.”

He has kept touch with several of his old teammates, notably Niall Quinn, Micky Gray – “who sometimes comes to Monaco” – Kevin Phillips, Gavin McCann (not Kevin: my thanks to Samwise at the Ready to Go message boards for spotting Eric’s slip, initially uncorrected by me, with the first name), Chris Makin and Tommy Sorensen.

And he took back to France happy memories of his time in the North East. It had been something of a cultural shock, watching players who had been partying late and hard turn out for training next morning and give 100 per cent as if they’d had early nights. He was surprised at how much freedom English footballers had compared to the French: “if they wanted to go out of the hotel and see a film on the eve of a game, that was fine, it wouldn’t happen in France.” (I think I decided at the time that going “to see a film” may have been a euphemism – Ed).

But his love of English football survived all these eye-opening observations. “I love the English game, the passion with which footballers play, but I do think the introduction of more foreign coaches has helped instil a little more discipline without losing the passion and strength.”

How does his view of the greater discipline imposed on French teams sit with the extraordinary display of rebelliousness by Domenech’s squad in the World Cup in South Africa? “I don’t think that was so much something done in a spirit of rebellion as an act of stupidity.”

And what, getting back to why Eric is of special interest to us, of Sunderland and its surrounds? “It was great club to be at, fantastic stadium, hot-blooded fans and a lot of really good players,” he said. Life on the whole was good, too. “My wife and I had no children then, but as a couple we really enjoyed the region. My wife loved the tranquility of the countryside.”

They lived behind the Riverside cricket ground at Chester-le-Street – “no, I still don’t understand the game” – and developed a lasting admiration of our civisme. This is a great French word that translates as “good citizenship” but means a lot more in practice. My own wife, also French, thinks of the term whenever she remembers arriving in Darlington as an au pair and seeing people not only taking the evening paper from unmanned boxes but also putting the cover price into the honesty box (“we French would be too crafty to do that,” she says).

Eric had two examples of his own, “We couldn’t believe it when we first moved from France. People would come knocking on the door to introduce themselves as neighbours and ask if there was anything we needed. That would never happen in France. And at pedestrian crossings, the very first car would stop to let you cross.” That, I can confirm, would also never happen in France.

In the end, a move Eric had seen as his last chance to play in the Premier League is one he recalls as a good one on many levels but, because of his lack of first team opportunities, somewhat frustrating. “I was 32 when I signed and often think I went two or three years too late in my career,” he said.

Now 42 (or 49 as now .. do not forget this all relates to 2010 – Ed), he is happily settled back in his home town. He expects the coming season for Nice to be as tough as the last one, when he took over (having been director of football) with 11 games to go and saved the club from relegation with a great run in which they suffered only one defeat, against the champions-to-be Marseille.

At a club with a modest budget and the certainty of losing its star striker Loic Remy any day now, there is no ridiculous talk of challenging for Europe: “my ambition is essentially the same – to make sure we stay up.” [2016 update: they did survive and have become a bigger, better club complete with a brand new stadium beside the A8 motorway outside Nice]

And the chant – my initial version having been corrected yesterday by Paul “Sobs” Dobson to read “oooh aahh, it’s Eric Roy y’knaa”? Yes, Eric remembers it well. But he had to ask me to explain the “y’knaa” bit.

* Eric Roy was manager of Nice from March 2010 to November 2011 but remained part of the club management until May 2012. He is now a French TV football pundit and has been known to talk affectionately about les Chats Noirs.

8 thoughts on “Eric Roy’s Sunderland return: can he inspire class of 2016 vs Chelsea?”

Next Post
Chelsea Who are You?: ‘Sunderland’s great escapes belong to national fabric’