So Philip Mison*, Fulham-supporting writer, broadcaster and much else besides, has answered our questions – see his Who are You? interview by clicking here – but that was not all he said when we fired some questions in his direction. Here’s the introduction he gave to his answers …

At the start of last season I published a Premier League club by club guide that was so
uncannily accurate I never tried to repeat the trick.

SUNDERLAND: Super stadium, slightly fickle fans, s**** manager (a certain Mr Bruce – ed).
Another side like Stoke who served up a false dawn to their supporters to New Year, then ended up in relegation trouble.

Awful when we breezed to victory up there in spring. Four points from them last year, same again this. Bruce has been spending big time, but is not the manager to take the Black Cats on. I always enjoy watching Gyan though. Have overpaid on Wickham and isn’t it often the case, away from Old Trafford ex-United players can sometimes appear, well…ordinary. Can Bruce get so many new faces to gel? No. See the Mackem turn sour – some of them up there are dreaming of top 5!

Sunderland as a play: Les Miserables

And so it came to pass. By the time we played out a fairly tame draw in game one a year ago this week Bruce was on the brink. I think it was a home defeat to Wigan after us that saw him out the door.

From that game I recall chances were few and far between. Dempsey dragged a good opening wide late on and Mark made an unbelievable stop from Sessegnon with his legs going the wrong way with the last attack. We were of course weak on the road last season, having been dire for as far back through our PL history as you want to go.

Away wins last season came at Wigan, QPR, Bolton and Liverpool. But of course since the “great escape” of May 2008 at Fratton Park under Roy, Fulham’s improvement year on year has come thanks to very solid form at home.

In the end of season return we rode our luck a tad to win 2-1, Frazier missing two big chances late on. Bardsley hit a belter (I rate him) to negate Dempsey’s free-kick goal – his 50th in the Premiership. That was sadly to be his last in the Fulham shirt and it was his 23rd in all competitions that campaign. A very big loss to the club in the window along with Dembele,- our other scorer that afternoon.

* Philip Mison on Philip Mison: F/L writer, producer, broadcaster. Travel writer, playwright and Fulham FC blogger (see his Fulham pages at ESPN – ed). Collaborators welcome for raft of film, documentary and music projects. My Dad hailed from Parsons Green and took me to stand on the proverbial orange box when I was six. He passed away on the eve of the Juventus game in 2010 we won 4-1 … I had a ticket but couldn’t use it. 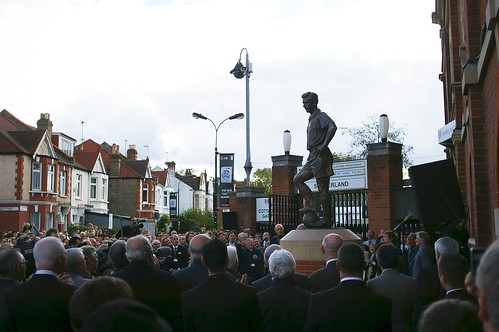 Next Post
The Fulham v SAFC Who are You?: ‘expecting a comfortable win’