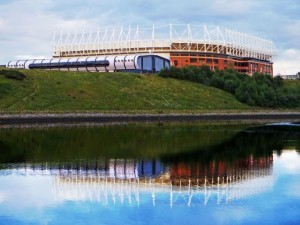 The title for the sayings of Martin O’Neill, as they are collected for these pages, has been chosen and you see it above.

That means a Salut! Sunderland mug – is there no limit to our generosity? – will be heading the way of “Rob”, whose suggestion it was.

Of course we do not yet know whether the new manager will send out post-match e-mails in the manner of Steve Bruce and, for one night only, after Wolves, Eric Black. Bruce’s missives became a must-read around here, but also became an easy target as results worsened. But Bruce’s Banter, and the shortlived Black’s Bluster, are no more.

Today, MON walked into a press conference, his first as SAFC manager, looked at the scores of assembled journalists and asked: “Is this the best they could muster?”

Text updates from the SAFC official site gave the highlights of what followed, all short, sharp soundbites which he may have expanded upon later. Some readers will also be able to glean more from TV and radio interviews conducted after the conference.

* Sunderland is a fantastic club!

* I feel it’s important to start with a clean slate. Everybody gets a chance. It’s a genuine privilege to be here … so energised about being here, it’s hard to describe

* I arrived on Saturday to see the Lads before they went off to Wolves – the weather and the training ground reminded me of Glasgow. It’s like when you wake up and open the curtains and don’t know if it’s June or November – I’m so happy to be back

* (when asked about the England managership): not on my mind whatsoever. This is the job I want

* (about why he did not join five seasons ago): despite discussions with Niall Quinn (I) wasn’t in a position to take the job due to personal reasons

* I would love to be really successful at this football club!

* Eric Black kindly took charge on Sunday, but I’ll be bringing in Steve Walford and Seamus McDonagh as part of the backroom staff

Colin Randall, with customary thanks to Mrs Logic for her photographic skills

11 thoughts on “Martin’s Musings: O’Neill speaks and a column is born”

Next Post
Bendtner and Gary Speed: no case to answer