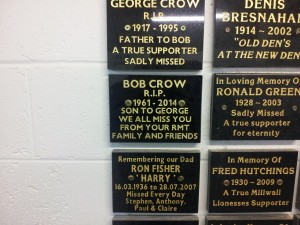 Pete Sixsmith‘s varied footballing tastes are well known. This week, no Sunderland game in sight but closing in on a minor achievement to impress anoraks everywhere, he tore himself away from the comforts of Busty Bank, Shildon and charged into the Lions’ Den. As if that were not enough, a trip to Colchester beckons. What on earth for? Read on …

It may have come to your attention, that like Sheldon Cooper, I have certain obsessions. Unlike Dr Cooper’s place, you can call round at Sixsmith Towers and sit anywhere. I do not do my laundry every Saturday night and nor do I try and catch people out in order to say “Bazinga”.

My obsessions tends to revolve around visiting sports grounds, particularly those which host the 11-a-side game played with a relatively large round ball, although 11–a-side games with a small hard ball and 13-a-side games with an egg shaped one are also on my itinerary.

To that effect, I have now seen at least one game on 91 of the 92 senior grounds in England, ranging from Accrington Stanley to York City. Now there is a fixture to attract the real obsessive; first club alphabetically v last club alphabetically: Saturday March 21 for anyone interested.

On Tuesday night, I ticked off ground number 91, The New Den in Zampa Road, London SE 16. It was one that I could have done with Sunderland a few times in the past but never got round to, probably having my subconscious dredge up memories of a very unpleasant afternoon back at The Den in August 1974 when bricks were thrown in the Main Stand.

However, the bullet had to be bitten and the word on the streets was that although it was not a matchday experience that peaceloving hippies and Buddhists would necessarily enjoy, it was mostly non-threatening. So I went.

I caught the 12.57 from Darlington to Kings Cross, which then sat outside Northallerton station for 55 minutes, enabling me to begin a journey-long conversation with a gentleman from Finland who worked for the European Commission in Brussels and had been accompanying his daughter to Durham University where she was beginning her first year.

I helped him locate some of the finer, but perhaps unappreciated sights of Durham for his next visit: the Victoria, the Elm Tree, the Colpitts and decided that any doubts that I may have had about the purpose of the EU disappeared as a result of this conversation.

He dashed off at Kings Cross to catch a Eurostar train while I sauntered down to the Underground and embarked for London Bridge. Here, in the physical shadow of The Shard and metaphorical shadow of Murdoch’s News International, I ate and drank in a Young’s pub before taking a five-minute ride to South Bermondsey, home of the Lions.

South Bermondsey is not the kind of place that would feature in Location, Location, Location. It resembles a larger version of Eldon Lane, with a large travellers’ encampment, a scrapyard and a selection of takeaways that looked, shall we say, unattractive.

A five minute walk took me to Zampa Road, location of Millwall’s stadium. It has been there for 20 years and is a splendid example of concrete brutalism. It has four identical double decker stands, no gaps filled in and a stadium front that reflects the club – no frills, no posing, a real Ronseal of a football club.

My ticket was for the Dockers’ Stand, opposite the main stand, the Barry Kitchener Stand. Having once witnessed Barry kick lumps out of Wayne Entwistle for 80 minutes and then be forced into an error by our punk rocker centre-forward, enabling him to score the winning goal, I declined to sit there, preferring to sit opposite and laugh from afar at Big Bad Bully Barry (a revered figure at the Den, a one-club player – now deceased – who turned out 600+ times. See Gordon Hill’s tribute at Total Football – Ed).

I watched the stadium fill up, largely with middle-aged men. There were some youngsters and some women there, but the demographic was clearly male and male of a certain social group, men who would once have been dockers and stevedores and who now probably worked in a variety of jobs but who maintained their roots.

A plaque in the lower concourse was a memorial to fans who had died. Many, including Bob Crow of the RMT Union, had shuffled off this mortal coil at a relatively early age, suggesting that this was a working class area that had yet to buy into the healthy living credo.

Birmingham City brought a respectable following to a difficult location on a Tuesday night. They saw their team weather an early Millwall storm and then go ahead with two simple goals. David Cotterill set up the first for Clayton Donaldson and then scored the second from a free kick, which the Lions’ keeper Forde should have saved.

There were Sunderland connections with Justin Hoyte at full back for Millwall but looking a shadow of the player he was when on loan with us. He was replaced at half time. Carlos Edwards was also present but a non-participant; he was injured in the previous home game against Forest and it was a nasty injury that has ended his season early and may finish his career. He was a player I thoroughly enjoyed watching and those superb goals at Southampton and at home to Burnley when we won promotion will never be forgotten. (Salut! Sunderland offers sincere best wishes to Carlos – Ed).

Ian Holloway must have said something relevant at half time as his team led from the front and Lee Gregory put them back in the game, but they never looked like equalising. As they pushed forward, City began to pick them off and wrapped it up at the end when Cotterill sashayed past two defenders and rolled it into the path of Wes Thomas to score.

This was accompanied by the sound of crashing seats as many in the 9,086 crowd headed for the exits. One man in the Cold Blow Lane Stand, who had been berating his team throughout the game, sat there with his head in his hands before leaping up and pointing in the general direction of the Millwall management team. He was not a happy man.

Birmingham looked a decent side on this showing, despite losing to Fulham on Saturday. They had a very interesting 18-year-old called Koby Arthur, who ran experienced defenders ragged and who looks a real prospect. Should anyone at the club read this, go and look at him.

The return journey consisted of train to London Bridge, tube to Victoria and then the overnight bus to Darlington, where Malcolm Dawson of this parish, kindly picked me up at the godforsaken hour of 5.05. I shan’t be doing that again. I did bump into 72 year old retired postman John Dawson at Woodall Services, on his way home to Hartlepool after taking in East Grinstead versus Faversham Town in the Isthmian League. 3-1 to Faversham if you are interested.

It leaves me with the new Colchester United stadium to do. I could have done it a week on Saturday, but Shildon are at home to Stourbridge that day in the FA Cup. November 1 looks the likeliest as the U’s (imaginative nickname, eh) have a home clash with the Valiants of Port Vale.

Next Post
SAFC vs Stoke ‘Who are You?’: Kenwyne’s waste, Fuller’s brilliance, Newcastle’s dream world