Monsieur Salut writes: each close-season, we see a new set of SAFC kits. Each season, they divide opinion. I am clearly in a minority in liking, at least a little, the new home top. You may well disagree with me. Read on and have your say …

What you see above is not the new Sunderland home kit, the one generating such strong protests, but a markedly similar one from the days when our team was a force in the land, the Team of All the Talents no less. Check out a great description of historic strips at http://ryehillfootball.co.uk/art/the-art-of-sunderland-afc/.

Whenever we remind brand supporters – Man U and C, Chelsea, Liverpool, Chelsea, Spurs etc – that we’ve won six top flight titles, we must remember also that half of the titles were secured in the century before last. And what you see above is how we looked back then …

And this is how we will look at home next season as we strive for a lesser title, that of the Championship. 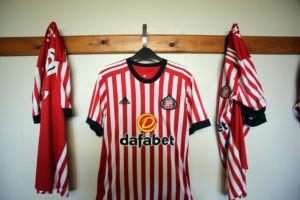 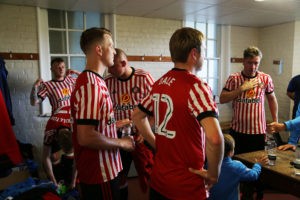 SAFC launched the kit with a Facebook-screened clip of Dawdon Welfare Park FC of the Peterlee and District Sunday League wearing it as they beat Hall Farm Glasshus FC of the Durham Alliance Combination League 7-1 at Ashbrooke Cricket Club – the site of one Sunderland AFC’s former grounds prior to its move to Roker Park in 1898.

Paul Welch of Dawdon Welfare Park said: “It was a huge honour for us to be chosen to unveil the new Sunderland home kit. For the club to recognise and celebrate grassroots clubs and players in this way is fantastic and it’s something we will remember for the rest of our lives. The kit is great and we all love it.”

For the club, the new top’s roots are “steeped in shirts from the 1880s”. “Since the club was formed in 1879, the stripes have taken on many guises – wide, narrow and even pin-stripes. The new look, featuring narrower stripes as worn during the historic era, the shirt has a black round neck and black cuffs on the sleeves. The front features the logo of principal partner Dafabet.

“The shirt is complemented by black shorts with red stripes. The kit also features black socks with a red and white turnover cuff.”

Yes, we could all do without the Dafabet logo. But that’s the way the world is. And is the shirt really so terrible?

This may – sorry, does – place me, along with Paul Welch from Dawdon, out on a limb. But I quite like it. It does seem to me to hark back to an early, golden era for our club. And I especially like the fact that there are more stripes than we’ve become accustomed to, even if I very much dislike the all-red back of the shirt.

That, I realise, is a minority view. People I like and respect have been hard on it. Rob Hutchison said it was “rank”, Paul Summerside declared it “horrific! A pub team models a pub team kit!”

Barry Emmerson was more scathing still: “We have put up with some horrendous performances over the years. We have supported our team through a little good but mostly bad, we have renewed our season tickets with blind faith but we have been there in huge numbers to see our team run out in proper red and white stripes and if this is the new strip then our club is a disgrace to our tradition.

“Who on earth sanctioned this? What a joke. Mr (Martin) Bain, you as chief executive who has only been here a year. Would you have dared to allow this to happen at Rangers, do we not mean anything as supporters to have to watch Sunderland run out in this deckchair attire? Shocking,scandalous and soul-destroying. How much more do we have to take?”

All of which makes my qualified support – I cannot say I’m deeply in love with it but I don’t get the ferocity of the criticism – seem a little isolated.

Have your say in the poll. You can add your alternative answer.

* Thanks to SAFC for permission to reproduce the images. Pre-order at www.safcstore.com or in club stores located at the Stadium of Light, Debenhams in Sunderland and The Galleries, Washington. Release date: June 29

** And let Rob Hutchison , absolutely no fan of the new top, have another kit-related whinge:

As another symptom of the club getting it wrong, my daughter @Livvhutchison bought an away top in the recent sale, an apparent bargain at £18.79. Three weeks later and the shirt is now on sale for just a tenner.Irritated, I emailed the club pointing out recent buyers were well out of pocket on this and what would they consider doing with the overpaid £8.79. They’d offer a refund if it was within 14 days and unworn which they must do under distance selling regulations. But shirts are sold to be worn and as it’s past two weeks, I questioned whether or not they fancied any goodwill under the circumstances.

No, nothing, not interested. Never mind the 15 away trips watching absolute garbage this year, and the previous hundreds of pounds spent in recent years with the club.

You carry on looking after your loyal “customers”, that’s what we are right ?

Martin Bain &=and Co, carrying on where others left off?

The club won’t comment on such matters – which Monsieur Salut feels is not only unnecessary but unwise – but apparently takes the view that it boils down to fairly standard practice for any retail outlet, which has regular sales as items are reduced and then further reduced when stock has to be moved.

Next Post
Ten Years After: when Carlos Edwards and Keano warmed Sunderland hearts