A harsh reader would say Bob Chapman brings it on himself. A drive up from the Home Counties for the Villa game weould have been enough to put off most people but four days later, he was enduring more dross from the worst Sunderland team he has seen in 54 years of following the club home and away. If only the team could play football as well as the likes of Bob and Pete Sixsmith write, we’d be out of sight at the top of the Championship. But how both of them would love to be able to report on a day out with old friends, supping good ale and recalling bands from the 1960s and 70s, without having to describe how it was all spoilt by SAFC …

Read moreThe Chapman Report from QPR: Out Demons Out deserves a Sunderland verse

Monsieur Salut writes: Ian McCullough* is a seasoned sportswriter and a friend of a friend (John Crowley, who has also occupied this hot seat). He supports QPR but has a soft spot for Sunderland and will be at Saturday’s match with a Mackem pal. His assessment of QPR’s decline could as easily apply to us.

Ian’s team has hardly had a great season but, on 40 points against our rock-bottom 28, can be fairly sure they will not finish last. Our relegation rivals are doing their best to give us a chance but it is not, so far, a chance our team seems able to grasp. Can Saturday provide enough respite from the unfortunate atmosphere when home games go wrong to enable them to play with rare assurance and pick up three points? John O’Shea talks of there still being 30 points to play for but the supporters desperately need some encouragement from Chris Coleman and whoever he can turn out.

Read moreQPR vs SAFC Who are You?: ‘money wasted on wrong players and managers’

In the depths of our despair, it seems beyond belief that interest in one small corner of Sunderland AFC’s world should suddenly perk up.

But in the wake of Tuesday night’s surrender to Aston Villa, Salut! Sunderland’s Facebook group gained three new members. Not spammers, hookers or chancers – we get applictaions from them, too – but from self-evidently genuine Sunderland supporters. We’re now nudging 750 and none, as far as we know, are hookers.

Maybe Chris Coleman should print this out, fold it with something harder curled inside and rap it over the heads of our players and, if he happens to be passing in the corridor, Martin Bain.

Read moreQPR vs Sunderland prize Guess the Score: rising above the gloom

Beyond shocking. That is Pete Sixsmith‘s withering verdict on the latest chapter in the nightmare that is Sunderland AFC. At least he saw a terrific film before submitting himself to the excruciating ordeal of an evening at the Stadium of Light. Not for the first time this season or last, Sixer’s musings are not for those of a nervous disposition …

Driving up to the game from Richmond, (I had been to the cinema to see Lady Bird – go and see it, it’s a great film) I listened into Total Sport on BBC Newcastle. The mood was not very positive and even Marco Gabbiadini, who has been accused of having a Pollyanna outlook on life, was decidedly downbeat.

As I passed the old Vaux site, he said “I wouldn’t be surprised if we failed to win another game this season.” After this shocker, I think any sane Sunderland supporter would agree with him.

The season has slid away alarmingly and the very fact that we are still in touch with the Holy Grail of fourth bottom is down entirely to the inadequacies of the teams around us rather than anything to do with the fighting spirit shown by our gallant band of seemingly perpetual losers. Once again, we reached new depths, out depthing the performances against Brentford, Ipswich, Barnsley, Reading, etc, etc. as we strive to take the club to the lowest position in its 139-year history.

We will continue to witness performances like this (although in ever decreasing numbers) as neither management nor players can do anything to arrest the inexorable slide towards obscurity and possibly oblivion.

Moyes, Grayson and now Coleman have all attempted to do so and all have failed dismally, one because he spent the small amount of cash he had badly, one because he could not deal with the horrendous situation he found himself in and one because he finds himself in charge of a club where the owner wants out, the support has given up and the players do not want to be at Sunderland.

Villa strolled through this game. Their keeper had a couple of smart saves to make. The full backs had nothing to do while John Terry and James Chester were as comfortable as Bertie Wooster and Gussie Fink-Nottle sharing a brandy and soda and a cigar in the Drones Club. The last time Terry was here he was sent off having been torn apart by Fabio Borini, Jermain Defoe and Duncan Watmore. He would have had more trouble from Fabio’s wife, Jermain’s mam and Duncan’s knee surgeon than he got from the hapless Ashley Fletcher.

The goals we gave away were as predictable as they were awful. Two headers from Grabban and Chester, scored as a result of the kind of marking you would expect to see in an Under 9s game. Grabban must have said to Steve Bruce “They can’t defend anything slung into the box. The keeper doesn’t come for them because he is too nervous and the crowd don’t like him. The central defenders are either too old, too fat or too poor to get them so just put that ball in that box and we will score.”

And they did. As predicted, Steele was nowhere near the ball for either of the first half goals and the defenders lived up to the billing that Grabban must have given them. He is a good player; he makes runs, looks for space and scores goals. Nobody else on our “team” does any of that.

I use the inverted commas around team because we don’t have one. We have 14 players who play on the same pitch but they do not play as a team. Villa did. They had two banks of four and two forwards. We have players who are all over the place, including some who should not be on the pitch at all.

There is no future for or at Sunderland for Steele, Lamine Kone, Donald Love, Ashley Fletcher, Tyias Browning and Billy Jones. Liverpool loanee Ovie Ejaria might make a player but not in the snake pit atmosphere that is beginning to envelop the Stadium of Light. If I were Jurgen Klopp, I would have him back at Anfield now. Cattermole and O’Shea are finished.

That leaves McGeady and McManaman who are on contracts and Asoro and Maja who came on as replacements. Asoro looked good and caused Wooster and Fink-Nottle to put their glasses down a couple of times to attend to him. Villa have probably made a note of his name for next season as he certainly won’t be at Sunderland. Maja did ok but he has a way to go yet.

It was a wretched night. I left before the end and was home by 10.35. I listened to Gary Bennett while driving past the Vaux site and I heartily agreed with his analysis that we didn’t have a goalkeeper, the defending was poor, there was no creativity and we never looked like scoring. He was as sure as I am that relegation is an absolute certainty and I am tempted to seek the odds for Marco’s prediction that we will not win another game.

I’m afraid that, so far, Chris Coleman has not improved the situation one iota. He looks lost and is probably regretting taking the job, not having realised the desolation that exists around the club and the support. If he is to remain next season (and few would blame him if he baled out), he needs to start thinking seriously about who will play next season.

The whole situation is beyond shocking and much of the support fears for the future of the club as a whole. Division One may give us an opportunity to stabilise, but I fear a repeat of what Bristol City did in the 1980s when they “achieved” three successive relegations. It really is that dire. 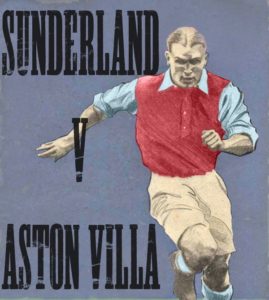 Read moreSAFC vs Aston Villa: things to consider as a mighty challenge looms

Confidence remains in short supply as another failure to win a game not only exposes our limited powers of resistance but confirms our desperate short-term outlook.

As Mick Goulding and others have pointed out, here and elsewhere, a draw at in-form Millwall, while creditable enough if viewed in isolation, simply isn’t good enough in our current parlous state.

Tom Jolliffe* cannot see beyond an away win at the Stadium of Light tomorrow. At least he applies a neat sense of humour, and traces of sympathy, to his asnwers about our plight and his club Aston Villa’s buoyant current state and longer-term prospects (which should not, in his view, include much room for Lewis Grabban beyond the Championship). And however controversial this will be, Monsieur Salut thinks he’s closer to being right than wrong in his assessment of Steve Bruce …

Stephen Jones*, our Millwall ‘Who are You?’ volunteer, joins the growing number of outsiders who doubt our ability to get out of trouble. Gone are the words of encouragement from earlier in the season. People who do not support Sunderland see the same signs as those who do. Of course, a few wins would change everything. But where are they going to come from given the difficulty we have in avoiding defeat let alone taking three points, no matter who the opposition? And a word of warning for our flaky defence: George Saville, who scored twice against us at the Stadium of Light, has been having a barren spell and may see a game against us as just the opportunity to start hitting goals again …

Read moreMillwall Who are You?: ‘ridiculous for SAFC to be in this situation’

What will our leaky defence do next? Your guess is as good as mine but it could win you a prize, albeit only a mug.

Guess the Score is early again this week as Monsieur Salut is braving the Siberian chill to drive to what should be sunnier climes except that its snowing there as well.

And the competition reverts to the conventional format this week. That means the prediction does not have to be a winning scoreline for Sunderland to qualify.