Malcolm Dawson writes…….my one and only visit to the Madejski Stadium was on 31st of August 2004. I remember it well – it was a Tuesday and I was able to get away from work in the Midlands in time to drive down to the Royal County of Berkshire for a midweek game. I arrived at the ground with over an hour to go to kick off. The queues were already building up at the away end and there were plenty of red and white shirts patiently in line, waiting to collect their tickets. Fortunately, or so I thought, I had mine. The only problem was it was in the possession of one of my Heart of England compadres, who was travelling down from Coventry with a bunch of others and naturally they stopped off for refreshments on the journey, delaying their arrival until just before kick off. So for an hour I was trapped outside the stadium getting more and more desperate to find the toilet facilities. The turnstile clicked as the referee blew for kick off and by the time I’d emptied my bladder and climbed the stairs to my seat we had already conceded what was to prove the only goal of the game.

Peter Sixsmith has been to both Elm Park and the Madejski and in this the latest of his season long series, recalling his visits to all of our opponents, he remembers both.

Here’s another fixture where I have seen Sunderland play on two different grounds – this time Elm Park and the Madejski Stadium. I have to say that I did not enjoy either experience mainly because we lost both games but also because I thought that both stadiums were poor.

The Elm Park visit was for an FA Cup Third Round tie on January 6th 1990. We were on the edge of the play offs in Division Two, they were a division below us. There was added spice to the game in that Ian Porterfield was The Biscuitmen’s manager. Some may remember his goal in the final tie of the same competition 17 years earlier…….
It wasn’t the only time that the Hero of The Glorious 5th May managed a team against his old club. He had brought his Sheffield United team to Roker on Boxing Day 1985 and had seen Lawrie McMenemy’s “team” win 2-1 thanks to goals from Eric Gates and Gary Bennett.

Porterfield left United at the end of the season and took the job at Reading, then a club who had rarely been out of the Third and Fourth Divisions. He had been successful at Sheffield United in getting them promoted from Divisions Four to Two before he was sacked and Reading wanted more of the same. Alas, he only lasted eighteen months before he departed for a stint as John Neal’s assistant at Chelsea.

We were managed by the personable and popular Dennis Smith who had dragged us out of the Third Division a couple of years earlier and was endeavouring to get us back into the top flight. He had built a solid side and we were sitting comfortably in third place in the league, although we were to slip away quite badly after this game, finally rallying to win at The Sports Direct in the play offs a few months later.

We drove down to this one in my VW Polo, setting off early and negotiating the M1 and M40 with some ease. When we eventually arrived at the ground it was pouring down and we were made to stand on an uncovered terrace by a distinctly unhelpful bunch of stewards and police. They confiscated brollies from those who had brought them, deeming them to have the potential to be used as “offensive weapons.” Such was the attitude towards people going about their lawful business watching football 30 years ago.

The game attracted 9,344 to a stadium that looked like a relic from the 1930’s with two uncovered ends and two low stands. As the rain teemed down the backs of our necks (no Gore-Tex clothing then) we cheered out the following team:

The Hero of The Glorious 5th May selected the following side:

Gordon Armstrong, he of the curly perm, opened the scoring in the first minute which cheered up a very wet visiting support but we failed to build on it and some catastrophic defending by Tommy Lynch allowed the Reading right back, Linden Jones to score twice in four minutes in the second half to win the game for Reading.

Poor Tommy was shipped out to Shrewsbury Town on loan and signed for them at the end of the season. He went on to make 234 League appearances for The Shrews and became one of their most popular players. Here, he is placed alongside Roly Gregoire, Andreas Dossena and Steve Hetzke as one of the least effective Sunderland players of all time. He could be joined by a few more by the end of this wretched season.

I visited The Madejski Stadium when we played there on the 22nd December 2007 in a Premier League game. Reading (no longer the Biscuitmen but The Royals) had been bought by businessman and magazine publisher John Madejski, a paramour of Cilla Black and his money had transformed them from perpetual lower league occupants to top level dwellers. Crowds were on the rise and cramped, dingy Elm Park had been dumped in favour of a brand new stadium. 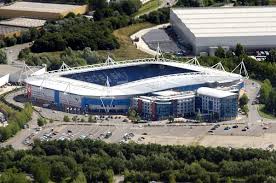 It looks like many other new builds. If it wasn’t for the colour of the seats, you could be at Derby or Middlesbrough or Southampton – except that all these grounds are within walking distance of their respective town centres. The Majdeski is the best part of 3.5 miles from the town centre and requires a bus ride to get there. I know because I did it in 2007.

This time I travelled by train, not from Darlington but from Dover Priory. I had been escorting a number of Ferryhill’s finest on a school trip to Lille and hopped off the bus at Dover to get to Reading the next day. The trip had been eventful. There had been problems on the ferry across to France, the weather was cold and wet but I did enjoy Lille and particularly the 3 Brasseurs, a splendid bar near the railway station which had a splendid selection of Belgian and Belgian style beers on show. Unfortunately, my lunch there was ruined as I had to go and rescue a child who had got lost and had been crying to his mam back in County Durham. Huh!

I stayed in Reading the night prior to the game and took a trip to Henley-on-Thames the next morning, where I searched in vain for M Salut’s one time colleague, Boris Johnson, who was the local MP. Alas, he was nowhere to be seen or heard (would that that were the case now) so I legged it back and arrived at The Madejski in time for the kick off.

Dennis Smith and Ian Porterfield were long gone and their replacements were Roy Keane and Steve Coppell. Both were in charge of teams who were struggling and Reading did go down at the end of that season.

It was a dull game which livened up in the second half. Ingimarsson opened the scoring in the 69th minute and our response to that was to launch a series of furious attacks. It looked like we had claimed a well-deserved point when Kenwyne Jones was brought down in the box and Michael Chopra converted the penalty in the 82nd minute.

Kenwyne then missed a glorious chance to wrap it up and claim our first away win of the season but he fluffed his lines and even worse was to come in the 90th minute, when Stephen Hunt’s volley was deemed to have crossed the line, despite Craig Gordon making a magnificent save and clawing it out. The ball did not cross the line – the BBC website said so and that’s good enough for me. Roy Keane said so and that is extra good enough for me. We wuz robbed………

So, two visits to Reading and two defeats. I shall not be risking a third one.