The penalty awarded to Raheem Sterling for Man City after his foot prodded the ground and he fell over against Shakhtar Donetsk, having suffered absolutely no contact from any defender, has revived the debate about whether players should own up. Yes, it does sound a preposterous notion in 2018. Keith Hackett, a former referee talking on TalkSport, said that while a ref could take account of a player’s honest admission and change a decision, it was not something officials actually expected to happen. Oh dear.

But worst penalty decision in history, a question that we’ve seen being asked today? Sterling is in perfectly good company, Think back to Boxing Day 2011 at the Stadium of Light. This is the piece we published then, after Everton’s Leon Osman, untouched by any Sunderland player, missed his kick, stubbed the ground and went down with his hand raised in appeal mode. A world-class referee, Howard Webb, was fooled and Everton equalised from the spot to save a point. Go to the link to read the lively debate that followed …

Postscript: Sterling did offer a public apology to the referee Viktor Kassai and to Shakhtar (the penalty brought the second of City’s six goals). I am sure an Everton supporter will put us right if Osman, too, finally admitted he had ‘misled’ Webb …

Read moreAnything Raheem Sterling can do, Leon Osman did better for Everton

Every honest football fan knows he or she has occasionally howled at referees and linesmen only for the contentious decision to be proved to be flawless. Every honest footballer knows his entirely subjective view of an incident may not be accurate. And we all know footballers make many more costly mistakes than officials.

Yet weekend after weekend, there is the closest scrutiny of judgements seen as plain wrong, debatable or merely unpopular with one set of fans or the other.

As the season reaches the time when vital points are at stake, at both ends of all divisions and in decisive cup ties, controversy inevitably become more intense.

Monsieur Salut writes: Salut! Sunderland often asks ‘Who are You?’ interviewees to share their views on the best and worst referees in the Premier League. Mark Clattenburg is the one most commonly named as the best and, for all that he’s a Mag, I agree. Experience has also taught me to be as understanding as most of the pressures on match officials. I criticise bad decisions and inconsistency but am the first the recognise that players make many more bad decisions, and show much greater inconsistency.

In one of the occasional guest pieces we receive from a football academic, Tom Webb, we learn that pundits generally are also more restrained in their assessments of refs than is supposed. It is worth noting that many ex-referees – Graham Poll, Howard Webb and Dermot Gallagher spring to mind – now provide their services to the media as expert assessors … 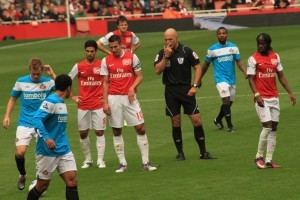 At another place, I have written a profile of Louis van Gaal. In it, I refer to the global Manchester United fan base – how many of those 75m or 330m, take your pick, “supporters” have the faintest idea where Manchester is? – to whom winning is regarded as a natural right.

If those supporters happened to include the top referee in England, how much easier it would be to ensure the wins kept coming.

So Howard Webb’s decision to end his career as a matchday referee (he becomes technical director of the refereeing body, Professional Game Match Officials Ltd) has inspired a procession of United-haters at Twitter. OK, and a few wits too.

The Indie chose these among other examples …

Louis van Gaal begins summer clear out as he decides not to renew Howard Webb's contract at Manchester United pic.twitter.com/IqaXYCmUjx

For the record, I admire Webb. He struck me as being a sensible, intelligent referee who handled games well.

The supposed pro-MUFC bias is a simple invention, great stuff for down the bar but devoid of logic or serious proof.

Of course, like just about everyone else, he made mistakes at work and some of these may have benefited ManU.

Two examples that worked against Sunderland: the laughable penalties awarded at Newcastle United (confirming Steven Taylor as a cheat) and the Stadium of Light (Everton’s Leon Osman inventing a foul when no one was near him and he kicked the turf before the obligatory theatrical fall). These did not lead me to assume Webb was somehow anti-Sunderland. NUFC fans will produce examples from the fist of the 3-0 demolitions at SJP of his decisions favouring SAFC.

Nor did I think he had such a dreadful game in the 2010 World Cup final. He may regret not dismissing Nigel de Jong but the fact is that the Netherlands presented such a thuggish game plan that night, one that Spain increasingly copied as the match wore on, that a zealous ref would have ended up with three or four a side.

Footballers notoriously make many, many more mistakes than match officials. I shall remember Webb as a fine ref, flawed as he may have been. I naturally expect plenty of Salut! Sunderland readers to differ.

The scoreline bears repeating over and again: Newcastle United 0 Sunderland 3. It was a wonderful team performance and it seems beyond belief that Alan Pardew should place such store by the wrongly disallowed Newcastle goal when Howard Webb had spared his side two, perhaps three first-half penalties, the likelihood of an early Sess goal and a sending off. It also seems beyond belief that in 2013, humanity can still find enough zero-intelligence specimens to beat up a city centre, their own city centre at that though it wouldn’t actually make it seem more civilised had their spite been vented somewhere else, because a football game has been emphatically lost. Pete Sixsmith offers the right mixture of high praise and schoolmasterly scorn …

For all Salut! Sunderland knows, Leon Osman is a regular at church, helps old ladies across the road, spends hours daily feeding the homeless and plays Scrabble without even thinking of snatching a sneaky glance at everyone else’s letters.

He also stands accused of being a prize cheat.

Oh no it wasn’t the worst refereeing decision you’ve ever seen. Oh yes it was. Take your pick. It was a shocker however you look at it and we await either a fulsome public apology from Howard Webb or a formal announcement that he is returning to a less accident-prone life as a sergeant of the South Yorkshire constabulary. Leon Osman might wish to say something, too, about the upraised arm which any observer is entitled to interpret as a fraudulent claim for a penalty after he fell over his own feet. Pete Sixsmith has plenty to say …

Sunday was the night the Netherlands, with complete premeditation, killed football, or at least did their level best to do so. Everyone, except their own short-sighted and indignant fans, knows this to be true, including – as Jeremy Robson, pictured with his young ‘un, points out – a certain Dutch master of the Total Football at which his country once excelled …

I’ve always been a huge admirer of Johann Cruyff.

As a player, he was sublime. The now famous “Cruyff turn” which he introduced to the world in 1974 is a practice drill for aspiring footballers the world over. Hard to believe that up to 40 years ago, this move had never been witnessed on a football field.

So SPAIN are top of the world, winners of the 2010 World Cup after at one stage looking more like heading home in disarray. But South Africa confounded so many people with the way it handled the event – think back to all those warnings, and not just from tabloid newspapers, of the likely security headaches – that it deserved to host a better final than the lame, petulant affair mustered by Spain and the Netherlands. Yet Spain generally played the better football, and triumphed with a late, late winner from Iniesta. The Dutch claimed injustice, a missed offside, but deserved nothing better after their cynical, ill-tempered display …