It must rank among the most squalid decisions ever taken in professional football, and there’s plenty of competition.

No profanity, please, lads and lasses but do have your say on the dismissal of Claudio Ranieri just months after he led Leicester City to its finest hour. 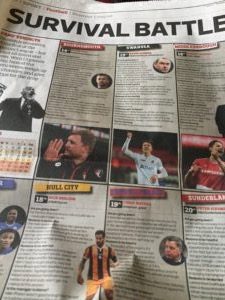 Monsieur Salut wrote: the old ones are not always the best, but our current plight – described with melancholy beauty in Pete Sixsmith’s report of Sunderland 0-4 Southampton – and the poor health suffered by a friend prompted me to dig out this piece, first published in November 2008.

The original article began with some references to racist behaviour, happily rare and irrelevant to today’s situation, so I will skip them here. The rest seems all too applicable now, though I have slightly edited it.

Fill in the gaps from your own experiences (mass walk-outs, instant social media responses etc have become features of some supporters’ lives since this posting first appeared) of following SAFC through thick, thin and thinner. And please get better Graham Noble, friend, former colleague and the subject of the final anecdote …

Malcolm Dawson writes…..with Pete Sixsmith bringing joy to the faces of the youngsters of North Tyneside after ducking into a …

John McCormick  writes…..
I was at our previous  game, which we lost. We did, however, have the semblance of a team and it was our first loss in three games, against a full-on Liverpool team. So full on, in fact, that I endured loads of stick on Monday from deluded scousers who, having listened to Klopp, thought we did nothing but defend. But I knew better and had a feeling we would show what we could do when we played the Premier League champions.

Not that it matters what I think. The really important words come from our manager, who writes to Colin (and maybe one or two others) immediately after each game. And Colin, in his turn, passes the letter on to his team so we can share it with you:

Monsieur Salut writes: what a massive win. Jermain Defoe added to Robert Huth’s own goal to provide the cushion, a fabulous last-minute save from Jordan Pickford cut Leicester’s recovery short and the return of Jan Kirchhoff and Seb Larsson was crucial to the second-half breakthrough.

Pete Sixsmith had donned red and white, headed up past Durham and then … those with memories of his activities this time each year will know what happened next. He carried on due north to the chosen location for his Santa duties. These took him not to the game, but to the dark side of the Wear-Tyne divide, safe in today’s kind of red and white. Meanwhile, A N Other chips in with the seven-word verdict …

Monsieur Salut writes: Tim Burke* has Millwall connections and should perhaps be wearing a ‘you all hate us, we don’t care’ T-shirt. Instead, he fell in love with the Foxes after moving to Leicester and much of the footballing world fell in love with his adopted team in May. It was a season he enjoyed for a reason never experienced by a Sunderland supporter who was not alive in 1936. This season? Tim’s happy, even if tongue in cheek, to avoid the drop . Great attitude and great replies – and maybe he can take heart from Sunderland’s history; we won the FA Cup in the season following our last top flight title …

Two good wins followed by a logical defeat at Anfield after we’d held out well for 75 minutes and even had two good chances to go ahead.

The positive way to look at our last three games is not to think in terms of two-steps-forward-one-back but to see each of them offering signs that we can break free of the bottom three.

The season before last we won only 7 games and we stayed up. We even finished above Aston Villa, who won 10, as well as QPR and Hull City, whose 8 wins each could not stave off relegation. The other relegated team, Burnley, had 7 wins, the same as us.

The difference between us and Burnley was that we achieved 17 draws, and lost only (only??) 14 games. They could manage only 12 draws, and their five fewer points meant they finished second bottom, three places below us.

And thinking about that got me started on the notion of win-loss ratios, which became the tool I used to track clubs in last season’s relegation watch.