Yesterday Bernard Walker expressed his love for Goodison Park.  Pete Sixsmith will understand why, for it is, as he says above and below:

“…my favourite ground after Roker”.

Read on for an enthralling reminiscence.

Of all the grounds I have visited while following Sunderland, the one that has changed the least is Goodison Park. Two of the four stands are exactly the same as they were I when I first went there in January 1966. The Bullens Road stand (where we are located) still retains its Rokeresque Leitch trellis work and those ever so retro wooden seats, cramped concourses and traditional toilets. And yet, despite those (considerable) drawbacks, I love going there.

Everton dub themselves “The People’s Club” in contrast with their upstart neighbours across Stanley Park who are more “The Tourists’ Club.” Firmly rooted in their Everton Valley community, they moved to Goodison from Anfield in1892, thereby facilitating the founding of Liverpool F.C and giving us the benefits of Bill Shankly and Bob Paisley as well as the less obvious ones of Rafa Benitez and Luis Suarez.

In his book “The Football Grounds of England and Wales” (written 35 years ago and still an essential part of any serious football followers’ bookshelf) Simon Inglis describes Goodison as “the first major football stadium in England.” Located on a field next to St Domingo’s Church, the Everton committee developed it quickly and improved it by hiring Archibald Leitch to build two double decker stands opposite each other.

The Main Stand (demolished and replaced by the triple decker in 1971) was opened in 1909, with the Bullens Road one following in 1926. These two stands typified football architecture in the opening decades of the 20th Century and had an enormous influence on other stadiums that were developing at this time. Both Ibrox, where the Leitch Stand is a listed structure and Roker followed suit.

By the time I made my first visit there in 1966, Goodison was one of the few grounds that was covered on all four sides and had seats in each stand. It was chosen above the less imposing Anfield for the 1966 World Cup and on its day, generated an atmosphere that was the equal of its Stanley Park rival. The day I went there were 47, 893 shoehorned into what was not quite yet “The Old Lady.”

I went for an FA Cup Third Round tie in a season where after a bright start, we were slipping down the league. We were sat in 16th position but on a mini-roll, having seen off newly promoted Newcastle United 2-0 thanks to goals from George Herd and John O’Hare and then coming from behind at Old Trafford to take a point in a 1-1 draw, O’Hare rattling the net again.

The FA Cup was all that we had left for the season – or so we thought. Blackburn Rovers and Northampton Town (both still in Division One, although the context has changed somewhat) looked cast iron certainties to go down, while the Roker faithful hoped that Baxter and newly signed Neil Martin would fire us to glory.

As always, those hopes disintegrated as stories began to appear of Baxter’s prodigious drinking feats. My father occasionally played the piano at Wetherall’s Club on The Green and would tell me the next day over breakfast that Slim Jim had been knocking the Bacardi back all night and was still at it as the pater left at 2.00 a.m. I got the feeling that team discipline under Ian McColl was not particularly strong.

I travelled on a coach run by Jewitt’s of Spennymoor for this one. Phil Younghusband, now residing somewhere in deepest, darkest Hertfordshire, went with me after a night on the Hubbly Bubbly at the Methodist Youth Club and a dismal journey it turned out to be. It was cold outside and even colder inside the bus as the rudimentary heating system had failed. There was snow along the side of the road, the motorway system reached as far as Preston and there were no personal radios or MP3 players, nobody to text or Instagram and the papers were rubbish. At least one thing hasn’t changed.

There was a huge crowd at the game – almost double those who had turned up in November to watch a relatively comfortable Everton win. This time it was different as The Toffees achieved a very comfortable win, taking their first step to Wembley and an FA Cup triumph famous for Mike Trebilcock and a celebrating Evertonian skipping around on the Wembley turf and giving the Met the slip.

There were ladies giving out toffees from wicker baskets inside and outside the ground and we all wore Daily Express “hats” which were like slipped over your head like a headband and were in your team colours and had pictures of the players on. There were rosettes on sale with the FA Cup as the centre piece and the Liverpool Echo produced a special souvenir edition.

Meanwhile, on the other side of Stanley Park, exactly the same kind of thing was going on (minus the giveaway toffees) as Liverpool played Chelsea. They pulled in 54,907, meaning that 101,990 people watched football within half a mile of each other.

You can guarantee that there were no plane loads of Danes or Swedes at either of the two games, that the trains that emptied and filled at Lime Street and the now-closed Exchange stations were for places like Ormskirk and Southport and Huyton rather than Bristol and Lincoln and Plymouth. The police would be wary but unobtrusive and the only stewards to be seen would be those dispensing Higsons or Threlfalls Bitter in the Working Men’s Clubs. And there would be jumpers for goalposts……….

Those at Anfield got a better game if not a better result. Roger Hunt put the Reds ahead in the second minute only for Peter Osgood to level five minutes later. The Goodison crowd had to wait until the 36th minute before Derek Temple broke the tedium to give the Blues the lead. Chelsea responded to going a goal down by seizing the game. We responded by hiding behind our security blanket and refusing to annoy the Everton defence by actually attacking them. Gary Moore started up front for the third time and was once again on the wrong end of a comfortable victory for the home team, having been beaten 0-3 at Molineux and 1-3 at The Victoria Ground the previous season.

Bobby Tambling grabbed what proved to be a winner for Chelsea in the 67th minute but we had to wait until the 85th and 88th minutes for Fred Pickering to put us out of our misery. He had been signed from Blackburn Rovers for a then record fee of £85,000, scored a hat trick on his debut against Nottingham Forest and was a member of the England squad preparing for the World Cup, which would be held later that year. Alas, his season finished in March when he damaged his knee in a quarter final tie against Manchester City, which allowed Alf Ramsey to call up West Ham United’s Geoff Hurst to the squad. The rest, as they say, is history……

As was the FA Cup for us as we trundled back through Kirkby Lonsdale, Sedbergh, Kirkby Stephen, Brough, Bowes, Barnard Castle and West Auckland , before being dropped off at some late hour in Shildon. The Sunday papers were delivered late the next morning. 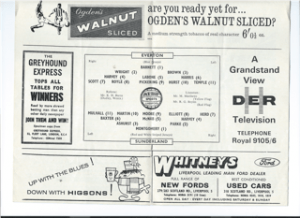 The game was refereed by Ken Burns of Dudley. No prizes for guessing which other FA Cup tie involving Sunderland he officiated.

It may be quite a while before I visit Everton again. By that time, the much loved Goodison may well have joined Roker, Highbury, and Belle Vue Consett on the list of “Great Grounds That Are No Longer With Us.” That distinct feel of football clubs being deeply rooted in their communities and surrounded by the people who actually watch them has almost gone as stadiums are built on land that once housed coal mines, docks and farmland. An era is rapidly passing before our eyes. I am pleased that I saw these grounds as they were meant to be seen – particularly Goodison, my favourite ground after Roker.

4 thoughts on “The First Time Ever I Saw Your Ground: Goodison, ‘my favourite after Roker’”

Next Post
Everton vs Sunderland prize Guess the Score: a brief return to the big time