Stop Press: and it’s another away game in the next round: hardly a glamour tie but at Oxford United, once again testing our (present) owners’ loyalties

It’s one of the traditions of Salut! Sunderland that Pete Sixsmith supplies a seven-word instant verdict – hence Sixer’s Sevens – after each SAFC game. If he doesn’t attend the match himself, someone else steps in. Tonight, he was indeed present (I have happy memories of meeting up with Pete before Bramall Lane on Boxing Day 2017; it was happy until 3pm since the Blades hammered us 3-0 and we were probably lucky to get nil).

Tonight started better and stayed better. Having barely seen the ball, we went ahead early with a wonder strike from Max Power (‘a beauty’, said Pete’s text message) after nine minutes. At half time, he was applauding an ‘inspired’ first 45 minutes. The Lads saw out the game in reasonable comfort and might have scored again; the super-critical Gary Bennett spoke of how well Sunderland had for once managed a lead.

Monsieur Salut writes: most of us like a good cup run. We may not turn up in big numbers any more for games in the early rounds but interest builds as each obstacle is cleared. As Wembley looms and interest turns to excitement, we even start to care about winning something as mundane as the Checkatrade Trophy.

So to Bramall Lane and the Football League Cup third round tie at Sheffield United.

We naturally consider ours to be a bigger club than theirs and historically that is hardly a controversial belief. But as things stand, they are a Premier League side – on merit – and we are striving for promotion from two divisions lower.

How will it go?

Pete Sixsmith cannot believe his luck. Another trip to Lancashire and another Sunderland win, this one the most impressive of …

Burnley fans who recall straying here in the past may also remember we would preview each game between our clubs with comprehensive question-and-answer interviews with one of their fellow supporters.

That has changed, not because we are now two divisions lower than the last time we met but because we have introduced a simplified version of Who are You? this season.

Instead off hunting down Alastair Campbell, as we did once at this link, or another Burnley fan and firing off questions at him (or her), we now – as with all other games – post a shorter list of questions here and invite responses in the Comments below.

Answer as many or as few as you wish. Sometimes the new way (and indeed WAY) works, mostly – it’s early in the season but on the evidence so far – it doesn’t but we’d welcome responses from as many Burnley fans as possible … 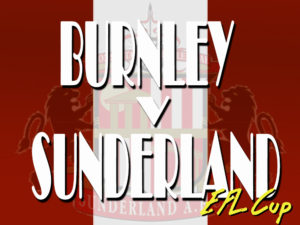 Malcolm Dawson writes….circumstances meant I couldn’t get to Accrington this evening, which is a shame because despite the rain and the abandoned game on my last visit, this together with Rochdale, is one of the venues I was really looking forward to revisiting this year. And presumably the Stanley Chairman is still miffed with Stewart Donald as I couldn’t even pay to watch a live stream via safsee. So it was Barnes and Benno for me, accompanied by the Lancashire burr of a couple of ladies sitting immediately in front of the commentary position.

Benno was certainly feeling more upbeat at halftime than he has been recently, and so was Pete Sixsmith, whose half time 7 read “comfortable first half with an improved performance.” Only one goal to show at the break, but at least it was in our favour this time.

One goal of course, is often never enough and as Pete’s second text said “one all after stupid penalty given away” brought a much more familiar scoreline. Aiden McGeady however obviously hadn’t read the script and put us back in front to no surprise for one of the two ladies who confessed to the listening audience “that’s why I said ‘s***’ when he came on” while Pete’s update read “wonderful goal by McGeady“. With time running out and me wondering if we might have to endure a penalty shoot out, Charlie Wyke stuck in a third and that was that.

Pete will be dusting down his soapbox and filing his match report tomorrow but for now make do with his full time summary in just seven words.

The invitation to supporters of our Carabao Cup opponents, Accrington Stanley, to answer a few questions from Salut! Sunderland has received more or less the response we might have expected.

Not one of the hardy souls who follow “the club that wouldn’t die” has taken us up on the offer.

The questions are repeated below in case there is more enthusiasm with the game being that much closer. There isn’t much to update; Stanley’s first home game of the season was suspended because of the continuing crisis at the intended opponents, Bury, so they remain pointless.

Another invitation – to supporters of Sunderland and Ipswich to predict the outcome of Saturday’s game at Portman Road fared better.

The absence of a prize did not deter readers and the posting attracted a healthy 18 responses, though not all were entries. David Miller correctly forecast 1-1 and is probably cursing Salut! Sunderland for making it a prizeless edition.

Let’s have another go, once again for fun. Do we care too much about a league cup game? Well, clearly not as much we care about Saturday’s tough league match at home to Portsmouth, who beat us twice last season as we played each other five times (including the Checkatrade final and the play-off semis). But for those of us who want Sunderland to win every game, a strong and successful performance at the tiny Wham stadium would be welcome – and do no harm to confidence after our less than resounding start to the season.