John McCormick writes: I won’t be in the North East for the home game but I have my eye on the away fixture at Bristol this season. It would be another club and ground on my list, not that I’m collecting. If I was, however, it would be some years before I could approach the number racked up by Pete Sixsmith, who has been here, there and everywhere, despite giving his time to other seasonal pursuits.
And here he is again with the next instalment of his adventures, his first sighting of Bristol Rovers at Roker Park:

This weekend sees the first appearance of Bristol Rovers –“The Gas” to their aficionados – who will no doubt be treating us to the odd chorus of Goodnight Irene before, during and after the game. This will be their thirteenth league visit to Wearside and they have what can best be described as a record that requires improvement.

They first pitched up at Roker Park on Valentine’s Day 1959. Our first season out of the top division was not going well and we had lost at Eastville Stadium in September, a result which had seen us plunge to the bottom of Division Two. By February, things had picked up a little and 24,189 turned up to welcome The Pirates to the North East. They didn’t swash their buckles very well that day and went home with a 3-1 defeat under their crossbelts.

Our team that day was; 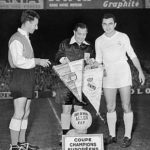 Dai Ward (whom I suspect may have hailed from across the Severn Estuary) put Rovers ahead in the 16th minute but John Goodchild levelled within a minute. Second half goals from Bircham and an o.g from full back John Watling gave us all three points and took us to the heady heights of 11th, the highest position we reached that season. As well as Ward, Rovers fielded Ray Mabbutt, the father of Gary and Kevin, who played 395 games for them and the prolific Alfie Biggs who made 424 appearances for them in two spells and netted 178 goals. The game was refereed by Arthur Ellis of Halifax, who later found fame as Eddie Waring’s sidekick on It’s A Knockout. 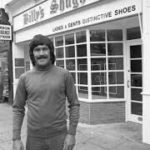 My first experience of the distinctive blue and white halves came 15 years later as we were making another attempt to get out of the second level and back into the top flight. Rovers had come up from the third tier, sandwiched between Oldham Athletic and York City and had started reasonably well in a league that contained Aston Villa, Norwich City, Manchester United and us. They left completely overwhelmed as we tore them apart 5-1. Billy Hughes, who had his best season as a Sunderland player, rattled in a hat trick, complemented by a Pop Robson goal and the traditional o.g. from a Rovers defender – Peter Aitken this time.
Our team that day was;

The nucleus of the 73 team was still there. Horswill and Tueart had moved to Manchester City while Richie Pitt had retired due to injury and Ian Porterfield was still recovering from the injuries he had received in a car crash. 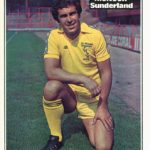 Moncur had been brought in to add some steel and experience to the team and was well received by Sunderland supporters who saw him as a fine player and a decent man while Dennis Longhorn was a gamble by Stokoe (£40,000 from Mansfield) that might have come off but didn’t. We finished fourth, squeezed out on the last day by Aston Villa as the three that came down went straight back up.

The rather deflated Gas were;

Their centre half, Stuart Taylor, was a massive man, bigger than Ron Yeats and much bigger than Dave Watson. He played 627 times for Rovers, a club that seems to attract loyalty from players and supporters alike, and is a much loved figure amongst The Gasheads.

Like many of his generation, he is afflicted with advanced dementia which may well be connected to heading a solid leather ball. A couple of years ago, the Rovers Former Players Association raised money to buy him a special bed that would accommodate his huge frame. I hope that things are going well for him. 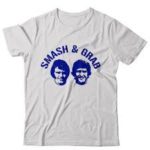 The two forwards, Warboys and Bannister, were prolific, with a capital P, and rejoiced in the nickname Smash and Grab. Warboys was the Niall Quinn figure and Bannister the Kevin Phillips one as they scored a bag of goals in their four year partnership. Warboys was a South Yorkshire lad while his chum came from the West of God’s Own County – Bradford to be precise. They came to national attention when Rovers won 8-2 at Brighton in a game that marked the arrival of Brian Clough as the Albion manager. It was chosen by LWT as The Big Match and all the local ITV affiliates took bits of it as Warboys in particular put Cloughie’s new men to the sword.

They did well for a number of years and briefly (and disastrously) resurrected the partnership at Hull City before both left the game and became successful businessman. They were a staple feature in Football League Review and in Shoot and Goal although the more intellectual World Soccer left them alone, preferring to talk about emerging talents in Venezuela, Iceland and Baffin Land.

No mention of Rovers on Wearside can be complete without a quick reminisce about Wayne Entwistle’s hat trick against them in 1978. Snow on the ground, an orange ball. An apprentice punk rocker destroying a defence – what’s not to like; we may even have a clip of that somewhere….

And finally, What a shame we won’t after all be welcoming back Rovers Assistant Manager, Marcus Stewart, who left after this piece was written and prepared for publication.

Sunderland v Bristol Rovers posted on Youtube by SAFCFOREVER FTM Sep 2018. If there is any copyright claim on the video or images used in this report, not answered by “fair comment” please let us know and we will remove or acknowledge as required

Next Post
Bristol Rovers Who are You?: ‘only one team in Bristol, isn’t there?’