Monsieur Salut writes: by tradition, Salut! Sunderland reproduces the Who are You? interview that has won our top HAWAY award. There is a twist, and a much-appreciated one. Doug Shields, a Bristol Rovers fan and the author, said he would prefer his prize to go to ‘a decent charity in Sunderland’. The runner-up, Richard Hall (Walsall), immediately made a similar gesture, asking for a replica top to go to an inner-city Sunderland school, perhaps as a prize for its summer fete. There you have it: football’s antidote to the shame brought by lowlife hoodlums running amok in Portugal in pretence of supporting England.

I shall offer an Art of Football print – the Sunderland range can be seen here and is superb – to the newish Sunderland fans’ museum and am open to suggestions as to the school. If I receive more than one approach or recommendation, I shall draw a winning school at random (provided it broadly fits Richard’s geographical preference). Thank you, genetlemen …

The season is over and Sunderland couldn’t quite get across the finishing line. But there were positives, says Monsieur Salut, despite the failure to achieve what everyone wanted and the club needed.

And then there were the Who are You? interviews, in-depth interviews with fans of opposing teams before each game.

Our fellow League One clubs proved a tremendous source of wit and wisdom as the interviews mounted up. It is now time to offer some rewards to those responsible for the best of them.

It has become a bit of a stuck old gramophone record, Salut! Sunderland‘s pride in a tremendous season of Who are You? interviews with opposing supporters.

Judging is at an advanced stage for our HAWAYs – annual awards for Highly Articulate Who are You?s – and with only a couple of sets of votes still awaited, front-runners are emerging.

As Monsieur Salut put it when writing to the judges: “I could have put them all in a hat and drawn three at random, so good have so many of the interviews been.” 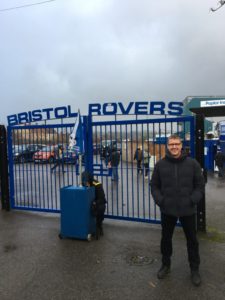 Monsieur Salut writes: you might struggle to believe it but Doug Shields, a Bristol Rovers diehard, did an excellent and amusing Who are You? interview here before the game at the SoL. This offering also has its entertaining moments.

But he doesn’t seem to have enjoyed his brief acquaintance with our fans the other night.

A lot of what follows is about food and I do wonder whether sour grapes might have crept into Doug’s dietary programme.

Or perhaps all Gasheads are gentle, indeed genteel souls whose idea of letting their hair down is to have two sweet sherries, not one, to wash down their crustless cucumber sandwiches while mistaking ‘Ha’way’, meaning come on, for ‘away’. Little wonder us ruffians from the north seemed so uncouth. Let Doug, a self-confessed lager drinker, take up the story …

As we all now know, the Checkatrade Trophy has assumed an importance the Champions League, the FA Cup and the Carabao can but envy. The semi-final win at Bristol Rovers, courtesy of Will Grigg’s first goal for Sunderland from open play and a second from Lewis Morgan, leaves us Wembley bound.

There is still much work to do in the league as we strive to take a top-two position. But for now, we can savour the moment and look forward to the March 31 final against Portsmouth. Two grand old clubs at Wembley = a sell-out crowd and a memorable occasion. More from Pete Sixsmith and/or Malcolm Dawson, both present at the Memorial Ground, will follow in due course but may have to await their return from the West Country. So let’s deal with other business …

John McCormick writes: I thought we never looked like losing, and I like the way this club is shaping up for the end of the season. That doesn’t mean anything’s done and dusted yet, but as Pete Sixsmith’s post game seven word text makes clear, we have at least one pleasant diversion  to look forward to as well as a growing sense of belief