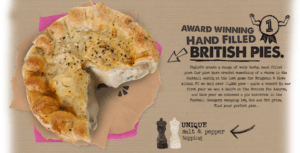 Monsieur Salut writes: what is it about football and pies? Things many of us rarely eat in normal, civilised settings suddenly become sought after at football grounds. I loved the idea of the Roker Pie Shop and remember popping in sometimes but have no recollection of how good their food was.

I do have faint memories of steaming hot and delicious steak and kidney pies Pete Sixsmith and I would eat in Durham while waiting for the Football Echo to arrive as we made our way home from Roker Park. These days I probably buy pies on only one in 10 or more stadium visits (and no, I don’t order sushi instead). Hardly an end-of-season review, but here you go all the same. It’s a search for the best football pies going and reaches us via a writer from Coral …

While the question of who will replace David Moyes dominates news surrounding Sunderland AFC, can we cast your eyes and your stomachs on to another important matter? Pies, no less.

Yes, while managers come and go (Moyes’s replacement will be the 10th in recent seasons starting with Roy Keane), the humble pie remains a steady staple of the Stadium of Light.

We want to know how Sunderland’s pies stack up compared with those offered by the catering servcies of other teams.

Instead of dwelling on Sunday’s emphatic defeat at Chelsea, maybe this is our chance to claim a tasty feat?

The Roker Pie Shop was the foundation of the Sunderland football pie.

We asked Martin Tarbuck, pastry expert and author of Life of Pies to see how we measured up; “I’ve heard of the legendary Roker Pie Shop, but my research led me to believe it had closed some years ago, after they moved ground.

“However, the Olive Steel Pie Shop in the city centre does a fantastic steak pie, cheap as you like at a pound and the size of a house brick!

“I also tried the Muller Swiss Bakery which did a very flat minced beef pie. Also, one of the best pie makers around that area is a chain called Dicksons in North Shields who make great meat pies.” [Oops – my mother lived there for a short time; it’s wretched Mag territory – Ed]

So, do Sunderland’s stadium pies make your wallet and your belly happy during a toe-curling 90 minutes of footie?

As it stands, the average cost of a football pie from Sunderland is £3.10 and you can look to pay £1 more if visiting West Ham. See how they measure up along with commentary from UK pie experts here. Also, have your say in the pastry stakes by filling in this quick three-minute survey. It’s as easy as pie.

Coral is searching the UK for the Premier League’s top pie and asking fans to have their say. Let us know if the Stadium of Light is serving top pies and you could win a hamper full of pies and other pastry snacks from Piglets Pantry.

• For your chance to win the Piglets Pantry hamper, just enter your email address at the end of the survey

• The winner will be chosen at random

• The contents of the hamper may vary from the image above

1 thought on “Who ate all the pies? And which club serves the best?”

Next Post
A daughter writes: amid the grief, a good night for Manchester